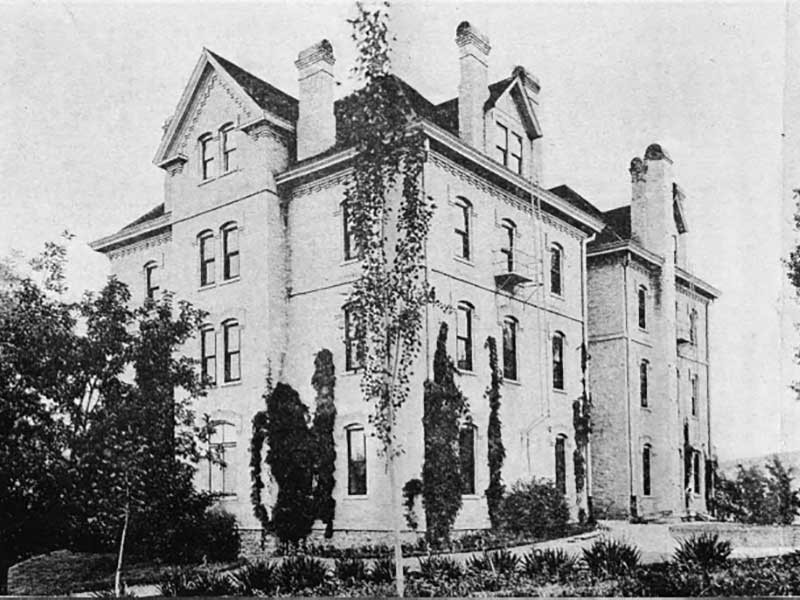 The UAC's Women’s Building "devoted to domestic science and arts," circa 1919.

In 1848, the women’s rights movement launched with the Seneca Falls Convention, organized by Elizabeth Cady Stanton and Lucretia Mott. The demand for the vote was its cornerstone. Although a constitutional amendment was first introduced in the U.S. Congress in 1878, it was decades later that the suffragists’ labors actually paid off. On June 4, 1919, the amendment passed, but then began the trudge to ratification by 36 states before it could go into effect.

Utah was the 17th state to ratify, according to Katherine Kitterman, historical director for Better Days 2020. Two weeks after the fall quarter commenced at the Utah Agricultural College, both houses of the Utah legislature voted in favor of ratification on September 30, and Governor Simon Bamberger signed the resolution on October 3, 1919. It would be a slog of some months before Tennessee narrowly approved the amendment with a surprising turn of events on August 18, 1920. The youngest legislator in that state’s House of Representatives, Harry Burn, was sporting a red rose on his lapel, signaling his opposition to the amendment; however, a timely letter from his mother turned his nay vote to an aye and his red rose to one of yellow—the color in support of women’s suffrage.

At the Utah Agricultural College in 1919, the course of college life went on per usual. The Periwig Club Play was hosted on Hallowe’en, and the Agricultural Club Ball came a week later. The annual Winter Quarter Farmers’ Convention and Housekeepers’ Conference convened in the branch campus in Cedar City in late January, 1920, followed by a second one on the Logan campus in early February. Both events drew over 500 participants with over 300 of them being women. The College Play, the Freshman Play, and the College Opera were the cultural highlights of winter quarter. During spring term, the Oratorial Contest in pursuit of the Casto Medal for the best memorized speech was held, along with “A” Day and Commencement.

According to the 1919-1920 College Catalog, Logan itself was a city with a “population, thrifty and progressive, of about 10,700; . . . comparatively free from vice, quite orderly, clean and generally attractive, with . . . electric lights, a sewer and a water system.” The two outhouses that served Old Main, beginning in 1890, had been replaced. The street-car line extended from the railroad station to the college.

The motto of the college was “Labor is Life;” its “dominating spirit . . . is to make the common work of the world—the work that most men and women must do—both profitable and pleasant.” At that time, tuition was free, but there was an annual entrance fee of $5; out-of-state students paid $25. Additional costs included gymnasium suit and shoes of about $6 for PE classes; two white wash dresses and two white aprons for students in foods and dietetics; textbooks and stationery at about $15-30; room and board from $6-$7 a week.

World War I had provided the finances for several buildings for the “West Point of the West,” occupied for soldier training and then as hospital space for influenza victims. The nearly 30 buildings featured in the 1919 Catalog included the Women’s Building “devoted to domestic science and arts” and a new Live-Stock Building of three stories. Art rooms included six studios with model stands, easels, casts from old masters in sculpture and a valuable collection of ceramics, textiles and books on art, along with a kiln for “china firing.” The humanities and social sciences were housed in the sciences due to a 1911 legislative move that prohibited the UAC from offering degrees beyond agriculture, irrigation, home economics, commerce and mechanic arts. The institution’s land-grant mission was effectively reduced. The competition between the Agricultural College of Utah and the University of Utah had erupted in a law that was a straitjacket for the college. It managed to retain its liberal arts areas by arguing “first class departments must be maintained in practically all of the arts and sciences” in order to carry out the work of the primary fields of study. F. Ross Peterson, writing in the Centennial history of Cache County, notes that a bill of 1927 became the “Magna Carta” of the college, the Course of Study Bill, which removed almost all curriculum restrictions and passed the state senate and house very quickly (249).

The lives of the coeds were probably not affected immediately by the ratification of the 19th Amendment, as only those aged 21 or older could participate. That remained the case until 1971 when the 26th Amendment lowered the voting age from 21 to 18. On the other hand, the women faculty would have been affected. Faculty members such as Charlotte Kyle in English, Olga Carlson in Physical Education, and O. Blanche Condit Pittman, a clerk at the Experiment Station were probably delighted. Still, because Utah was a leader in making women “First to Vote,” they most likely had plenty of practice of going to the polls.

Locally, the Logan Republican newspaper featured on August 28, 1920, a picture of the “Happy Group of Suffragists Over Their Great Victory.” And a political cartoon showing Equal Suffrage having the “last strand” of rope cut from her wrists by “Miss America,” the woman from Tennessee.

A September 4, 1920 opinion piece reprinted in the Logan Republican, found that it was “an interesting circumstance that the ratification of the Nineteenth Amendment.... has been completed by a southern state. The action of Tennessee is more impressive because the amendment had already been rejected by the legislature of eight commonwealths in that part of the Union. Although the vote in the Tennessee house finally establishing woman suffrage throughout the land was very close, the distinction which that state has won will not be less glorious in the history of the long, and ardently contested struggle for equal rights of citizenship without regard to sex.”

Unfortunately, only one Seneca Falls delegate from 1848 lived to vote under the 19th Amendment. Utah suffragists had joined with Alice Paul, head of the National Woman’s Party, and other leaders to fight for voting rights for other women—rights they already had in Utah. 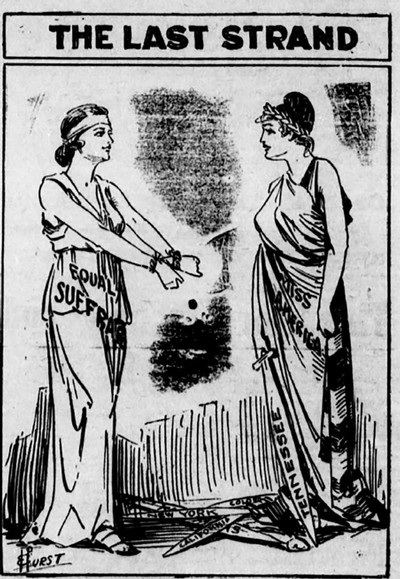 A political cartoon from 1919 showing Equal Suffrage having the "last strand" of rope cut from her wrists by “Miss America,” the woman from Tennessee. 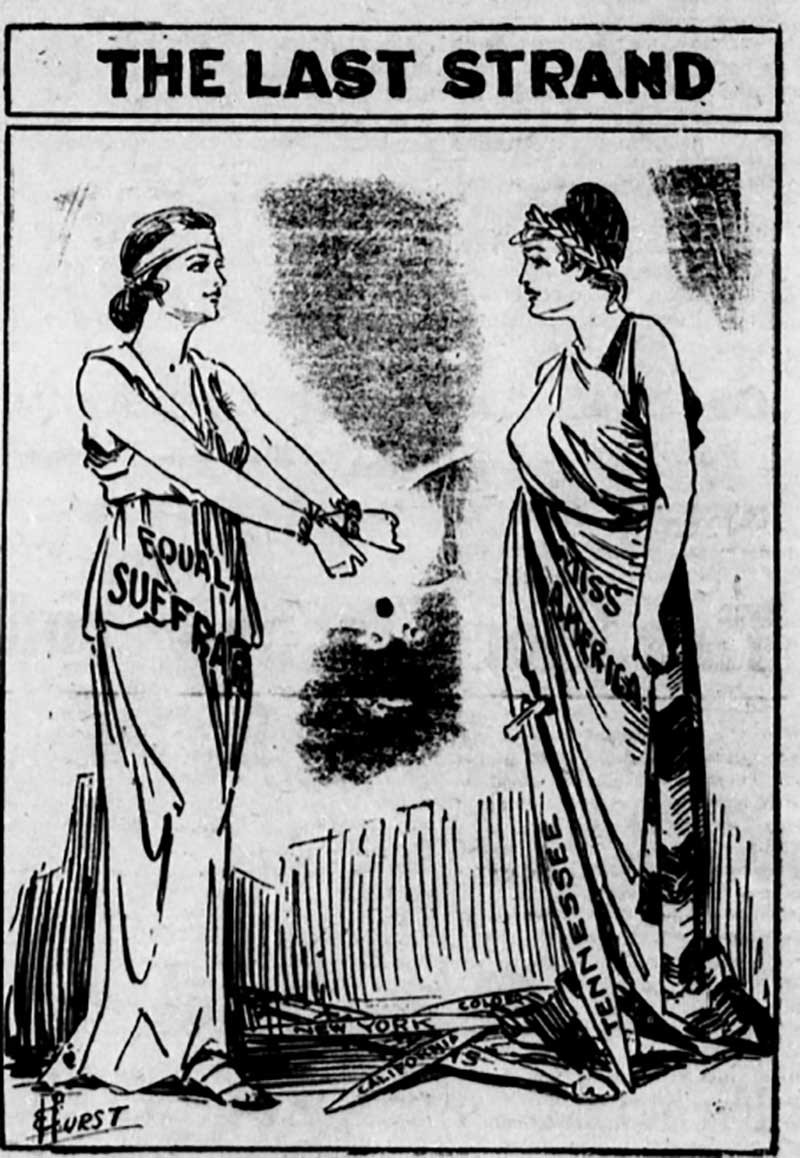