By: Holly Adams in the Utah Statesman
Issue date: 2/8/06 Section: Features
Heather Dempsey's job is 24 hours a day, seven days a week.
She's a resident assistant, or an RA.
"It is a lot of work," Dempsey, a junior in elementary education, said. "It's not constant, but you have to be ready at any time for it."
The main responsibility of an RA is community development, Dempsey said.
"The job is centered around that," she said. "Getting residents involved and getting them to know each other."
Helping to develop the community they live in is what the 60 RAs in Utah State University's on-campus housing do. This includes making bulletin boards, dealing with conflicts and planning programs the students can attend, Dempsey said.
These programs are centered on the issues that face college students, and specifically, what issues are facing those living there. They can be about critical issues, education, diversity or even religion, Whitney Milligan, assistant director for Residence Life, said.
"We will do a program for a problem area," Milligan said. "We are doing one on religious diversity soon."
Milligan, who was an RA when she was in college, said it is the RA's job to help the residents with their problems and to help them meet people and be social.
Dempsey said the hardest part about the programs is planning them around everyone's interests so they will benefit as many people as possible.
Usually students living on campus are freshmen, Milligan said. Taking six people from different backgrounds and putting them together in an apartment can be a hard transition for young students.
"They need help working through that," Milligan said.
College is where these young people need to learn assertiveness and life skills, and a good RA can help them do that, Milligan said.
RAs have several other responsibilities, including working in an office a few times a month, taking care of lockouts, checking out sports equipment and board games, making rounds to make sure everything is OK and Milligan said they have a 24-hour on-call shift a few times a month.
Whitney Stallings, an RA and a sophomore in sociology, said the worst part of being an RA is being on call.
"I hate doing lockouts in the middle of the night," she said.
Justin Mecham, an RA and a senior in biology, said he met his fiancé because they are both RAs in the towers.
"That's not why you're an RA though," he said. "It was just kind of random."
Mecham said he likes being an RA because he feels like he is helping other students. He said he likes putting on the programs for the new freshmen.
"It's pretty cool - when you feel like you have helped someone, it feels good," Mecham said.
There are several steps to qualify to be an RA.
"Our selection process is very in depth," Milligan said.
First, there is a question-and-answer session in the fall. Applications had to be submitted by Jan. 13 this year, Milligan said. The application is several pages with essay questions.
Then there is a group interview for the applicants, she said. This year, there were about 90. They look for people who work well together, have problem-solving skills and communication skills.
From there, some of the applicants are invited to attend a class every Tuesday and Thursday for five weeks, she said. The class teaches leadership and focuses on residence life.
The final RAs are chosen from those who attend the class and show their dedication and leadership skills. Those chosen will attend a more in-depth, focused training, Milligan said.
"I think it's a really valuable position," Milligan said. "Not only for the students, but also for the RA.
"The training is invaluable - you keep that for life," she said. "We are developing student leaders. And it's a fun job."
RAs get free rent and a monthly stipend. Milligan said if they are in apartment-style housing, they get $150 a month. If they are in traditional-style housing, they get all-they-can-eat at the cafeteria and $90 a month.
Stallings said they don't get too many problems or interesting situations as RAs.
"When we do rounds, the weirdest thing we ever see is people making out," she said. "Then when we come in, they jump away from each other."
All on-campus housing has an RA, even family housing. The family housing RAs have the same responsibilities as those in single housing, Milligan said.
"The people living there are still young," she said, "so they still need the same issues dealt with. [The RAs] have the same expectations placed on them."
An RA has the authority to enforce any policy that housing services has, Milligan said. They will usually tell the person what will happen next. But they can't fine or kick anyone out, she said. They have to notify a supervisor for that.
They are, however, authorized to call the police, Milligan said, and they are required to do so if they have a problem with minors and alcohol.
"We have a good working relationship with the police," Milligan said.
Residents who aren't comfortable with their living environment should let their RA know, Milligan said.
"If you don't bring it to our attention," she said, "you don't give us an opportunity to take care of it."
Stallings said anyone who wants to be an RA should do it.
"It's a good experience, you get to know a lot more people, and if you're social, it's a lot of fun," she said.
Dempsey said being an RA is worth it if you enjoy it.
"Most of my benefit is the experience," she said.
Stallings said if you have an RA, you shouldn't think of them as an RA. It is just a job and they are students too, she said.
"We're not out-of-control weird or anything," she said. "We're just normal."
-hollyadams@cc.usu.edu 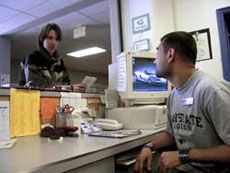 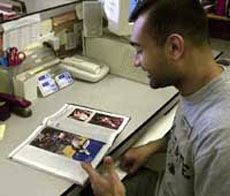 Media Credit: Jessica Alexander. Application for a RA position is open to anyone willing to apply. Applicants must take a test and attend a course before they get the job.