Utah State University and the Space Dynamics Laboratory (SDL) have donated historical space items that are featured in the Space Journey Exhibit at the Museum of Idaho in Idaho Falls Feb. 8 through Sept. 10.
“Utah State has been involved with space for more than 40 years,” said Stan Albrecht, president of Utah State University. “Being a part of this exhibit is a great opportunity for us to showcase the university’s extensive heritage and future in space.”
The exhibit opened with a press conference Feb. 7 where Brian Binnie, SpaceShipOne astronaut, Sen. Jake Garn, former NASA astronaut, and Idaho Gov. Dirk Kempthorne spoke. A reception was held prior to the official opening for friends of the museum and invited dignitaries.
"Utah State University has sent more student experiments into space than any other university," Garn told the crowd. "Utah State provides tremendous contributions to our country's space programs."
SDL donated SVET, the SDL/Russian growth chamber, as one of the Utah State displays at the museum. It was used for seven experiments on the Mir Space Station between 1990 and 2000, including growing Utah State’s Apogee Wheat in the first repeated seed-to-seed plant experiment in space. The SDL team worked directly with members of Russia’s Institute of Biomedical Problems in Moscow and the Cosmonaut Training Center in Star City, Russia. SDL/Russia’s current growth chamber, Lada, is in operation aboard the International Space Station.
“We are the pioneers in growing plants in microgravity,” said Gail Bingham, SDL chief scientist. “It is exciting to have a piece of our history displayed at the museum.”
Another Utah State project on display is the canister from the Get Away Special (GAS) program. For more than two decades Utah State has been the leading school in the Space Shuttle GAS program (1977-present). The canisters hold science experiments that are launched aboard the Space Shuttle. A total of 11 payloads have been launched to date with a variety of different research experiments aboard. No other college or university in the world has provided more payloads.
"It's an honor to be here and have our work on display alongside NASA and international space projects," said Jeff Duce, a junior and engineering student at Utah State. "It's been exciting to meet experts in my field and make contacts for the future. I've also realized what a national reputation Utah State has."
The Utah State University Wright Flyer team built a quarter-scale model of the Wright Flyer that is showcased, along with an Iridium satellite, a satellite that is one of 66 now in orbit that provide global telephone coverage. The only other Iridium satellite currently on display is at the Smithsonian in Washington, D.C. The satellite was donated to Utah State by Motorola.
“This has been a great opportunity to show the collaborative work that goes on between SDL and Utah State,” said Gayle Bowen, SDL division administrator. “The museum will be an effective outreach tool to help interest young students in space and science.”
Joyce Kinkead, vice provost for undergraduate studies and research, represented Utah State at the event and was recognized at the formal ceremony. She was thanked for Utah State's contributions to the event's success. Utah State University is the only university represented in the exhibit.
Other items on display at the museum include an Atlas rocket engine, an astronaut’s multi-axis trainer, vintage aircraft and rockets, replicas of the Apollo capsule and Mercury Spacecraft, a moon rock and many other attractions. The exhibit expects to draw more than 75,000 visitors.
For more information visit the museum's Web site.
Contact:  Whitney Wilkinson (435) 797-8286, (435) 881-4438, whitney.wilkinson@usu.edu
Trina Paskett (435) 797-4678, (435) 881-2823 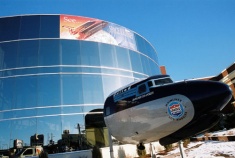 The Museum of Idaho, home of the "Space Journey" exhibit 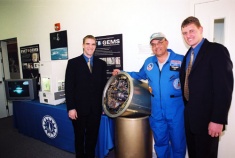 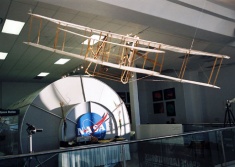 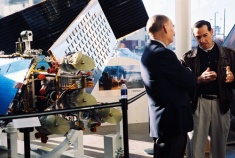 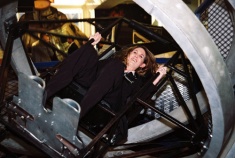 Trina Paskett takes a spin in a NASA training device 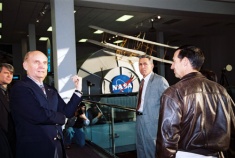