Better known as "Professor Baron" in the Aviation Technology program, Wesemann has been teaching in USU's College of Agriculture and Applied Sciences since January 2015. During that time, the program has grown from 160 students to more than 370, while adding a minor in Unmanned Aerial Systems for drone pilots, as well as a Master of Aviation Science degree.

In aviation, there’s no doubt that having good timing is imperative to being a successful pilot. So, it should really come as no surprise that after spending 27 years in the U.S. Air Force, Andreas Wesemann displayed some impeccable timing in the fall of 2014 as he was contemplating what to do after retirement.

“I realized that the draw of the airlines wasn’t there for me, not that I didn’t love flying or traveling, but I wanted to do something where I could interact with people and have a much more meaningful experience,” Wesemann says. “I remembered those early instructors I had in high school and Civil Air Patrol and the Boy Scouts that challenged me to set goals. And in the end, I realized I wanted to come back to education, and Utah State University had an opening the day I looked at their website.

“It had just posted, and I felt it was fate,” adds Wesemann, who received USU’s Eldon J. Gardner Teaching Award this spring. “I knew I was led to come here, and the last six years at Utah State have been absolutely a wonderful experience. And this award has truly validates my decision to come here to Utah State, to know that my passion for teaching is acknowledged.”

Better known as “Professor Baron” in the Aviation Technology program, Wesemann has been teaching in USU’s College of Agriculture and Applied Sciences since January 2015. During that time, the program has grown from 160 students to more than 370, while adding a minor in Unmanned Aerial Systems for drone pilots, as well as a Master of Aviation Science degree.

The master’s degree, which is available completely online, grew out of Wesemann’s own effort to complete his Ph.D at Utah State University.

“I went back to school here, so even though I’m a graduate of the Air Force Academy, I’m an Aggie,” Wesemann points out with a smile. “My dissertation was all about online and eLearning, and what did we have to do this spring? We had to transition all of our programs into an online format, except for our flight labs and some of our maintenance labs. So, I had an opportunity to apply the skills I learned from my Ph.D in a very practical way.”

A native of Utah, Wesemann grew up in Granger, which is now part of West Valley City. He says he first developed an interest in aviation as a 7-year-old boy by lying on his lawn and watching airliners fly into Salt Lake City International Airport. He joined the Civil Air Patrol at the age of 14, and secured an appointment to the United States Air Force Academy in Colorado Springs, Colorado, after graduating from Granger High School.

Wesemann spent two years at the academy, then left for two years to serve a mission for the Church of Jesus Christ of Latter-day Saints in Germany. Upon returning, he had to re-apply to the AFA, was accepted and completed a double major in International Affairs and Humanites two years later in 1991.

During his 27 years in the USAF, Wesemann served in numerous assignments all around the country and the world while becoming a certified instructor in six different types of aircraft, including the T-37 Tweet, T-6 Texan II and the C-130 and HC-130 Hercules, in addition to the Diamond DA40 and Cessna 172 civilian aircraft.

The name Baron was Wesemann’s aviator call sign, a moniker given to him – much to his surprise – during pilot training in Oklahoma.

“Baron is a great call sign to have; there’s a lot worse ones,” Wesemann explains. “You usually receive a call sign because of something you do or it’s a play on words, and you don’t get to pick it. It picks you. And it’s because I’m German.

“The funny thing is, Baron was a nickname I had in college, but they didn’t know that we gave it me at the naming ceremony,” Wesemann says. “So, I was just floored when they gave it to me. So, I go by ‘Professor Baron’ now, which is great for a student-professor relationship. It’s a reminder of who I was, and it helps me establish a relationship with these students, because as you can see, the Air Force was a big part of my life and being able to have that connection with students in that way is very unique and helps me stay connected to the industry, as well.”

Wesemann’s wife, Terri, has also furthered her education at Utah State while the couple has been in Cache Valley. Currently serving as an adjunct instructor in the aviation program, Terri completed a bachelor’s degree in American Studies and a master’s in Aviation Folklore. Married for 29 years, the couple have four sons, two of whom are currently pilots in the Air Force – one of them flies F-16 fighters, while the other is an instructor, just like his father was.

“It’s pretty hard for me to believe that my 26-year-old son is an instructor pilot teaching people how to fly and making a differnce,” Wesemann notes.

But it’s certainly something that the elder Wesemann respects. During his USAF tenure, Wesemann served as an HC-130 squadron commander at Moody Air Force Base in Georgia and helped oversee the refueling of helicopters in the aftermath of Hurricane Katrina in 2005. He says “saving the one” in search and rescue operations is not unlike helping to motivate students to continue their education in order to reach their full potential, even though sometimes that may not be in aviation.

“I always think I can teach anybody to fly, but I’ve found out I can’t teach everybody how to land,” Wesemann continues. “There’s a few students each year that we determine this is not a fit for them. But I want to make sure that we find a place for them in life; help them find out what they want to do, because if you can be paid to do something you truly love, you’re truly blessed.

“I always tell everybody I never worked a day in my life because I have the best-paying hobby.” 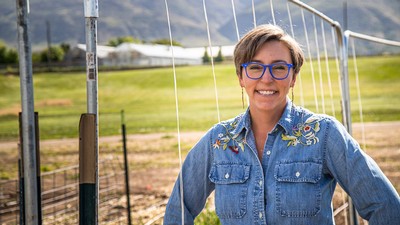 Along with all other STEM subjects, engineering is a male-dominated field. This dominance takes a huge role in USU's engineering program.