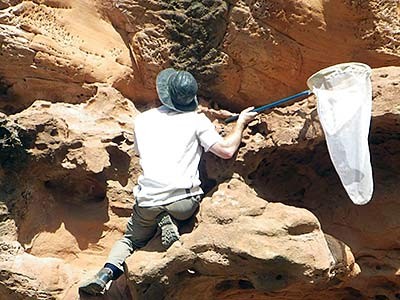 In the popular nursery story The Three Little Pigs, the prudent porker who builds his house of brick is chided by his pals, who choose much easier ways to construct their respective abodes. Only later in the cautionary tale does the reader discover the benefits of extra cost and effort in erecting shelter.

Utah State University entomologists have discovered a bee species with a similar, undeterred building drive in the unforgiving deserts of the American Southwest. According to the scientists’ findings, published Sept. 12, 2016, in Current Biology, tiny Anthophora pueblo goes to great effort to excavate nests in hard sandstone; eschewing weaker, easier-to-dig substrates and soils.

“Not much is known about this hard-to-find species and our first step was to confirm it actually prefers nesting in sandstone,” says Michael Orr, USU doctoral student in biology and lead author on the paper. “Once we confirmed this preference, the next step was to explore why the bees expend such tremendous effort and energy, limiting their ability to reproduce, to create these shelters.”

Parker discovered bees nesting in sandstone nearly 40 years ago at two sites in Utah’s San Rafael Desert, collected samples of the nests and reared the inhabitants to emergence. But his work was stored away and largely untouched until Orr begin examining the samples a few years ago and discovered five new nesting sites ranging from Ancestral Puebloan sandstone cliff dwellings at Colorado’s Mesa Verde and natural formations in southern Utah and California’s Death Valley.

“These bees are considered uncommon,” says Orr, who is a recipient of USU’s James and Patty MacMahon Graduate Research Award. “As the bees use water to help excavate sandstone, we found many sites by targeting areas near water.”

And longer examination of the bees revealed the benefits of the hard-earned homes in the xeric ecosystems.

“Sandstone is more durable than most other nesting options and any bees that do not emerge from these nests in a year are better protected,” Orr says. “Delayed emergence is a bet-hedging strategy for avoiding years with poor floral resources — especially useful in the drought-prone desert.”

Further, the tough, elevated shelters protect bees from erosion and sudden flash floods. They also help to control parasite build-up across years and may even deter growth of threatening microbes, he says.

“Because sandstone contains less organic matter than typical soils, we expect more microbes that make their own food such as photosynthetic cyanobacteria,” Orr says. “These microbes would be less likely to invade bee nests.”

On his forays into the desert to study the bees, the USU student discovered the challenges of survival through his own experiences. Traveling over rocky roads in Death Valley, his vehicle bottomed out resulting in a broken oil pan. Mindful of his limited water supply, he “booked it out of there.”

“The desert is a hard place to live,” Orr says. “Anthophora pueblo has pioneered a suitable niche between a rock and a hard place.” 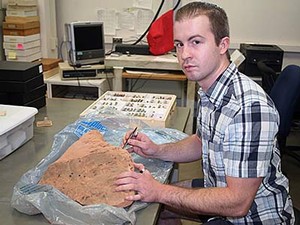 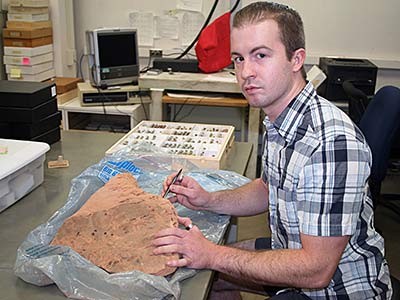