The Old Lyric Repertory Company kicks off its 2010 theatre season with the summer comedy “The Complete Works of William Shakespeare (Abridged).” The play is the first of four to open the company’s 2010 summer season.
The production opens Thursday, June 10, at the Caine Lyric Theatre in downtown Logan, 28. W. Center Street. Curtain time is 7:30 p.m.
The Old Lyric Repertory Company is a production program based in the Theatre Arts Department in the Caine School of the Arts, soon to be the Caine College of the Arts, at Utah State University.
Tickets for the production and all OLRC plays are available by calling or visiting the Caine School of the Arts Box Office in the Chase Fine Arts Center on the USU campus, 435-797-8022, or at the Caine Lyric Theatre Ticket Office, open from 1-8 p.m., Monday-Saturday. Tickets can also be purchased online at the CSA Box Office website.
The Complete Works of William Shakespeare (Abridged) features three actors who take on the herculean task of reenacting the entire repertoire of Shakespeare in less than two hours.
Jim Christian, director of musical theatre studies at Weber State University, is directing the play; it is his first time to direct for the OLRC.
“The three wonderfully creative actors are energetic, imaginative and fearless,” Christian said. “They perform Shakespeare in a fast, loose manner, they involve the audience and the show will never be the same twice.”
Christian described the performance as “structured improvisation, like what you would see if Saturday Night Live got its hands on Shakespeare — it’s wild and crazy, and may not be suitable for those younger than the junior high school age,” he said.
“It’s Shakespeare at warp speed,” Christian said, “Shakespeare purists will love it, and those who have never read Shakespeare will consider it a light, user-friendly version.”
Following its opening June 10, The Complete Works of William Shakespeare (Abridged) continues June 11 and 12. Additional performances are June 19, 23, 25 and July 10, 14, 22 and 30. Performances begin at 7:30 p.m. nightly with additional 2 p.m. matinees June 19 and July 10.
Opening next at the OLRC is Blithe Spirit, which hits the boards June 16.
For more information on the OLRC’s 2010 season, visit the Web site.
Related links:
Writer: Courtney Lewis, Caine School of the Arts, 435-797-9203, courtney.lewis@usu.edu
Contact: Sally Stocker Okelberry, Caine School of the Arts, 435-797-1500, sally.okelberry@usu.edu 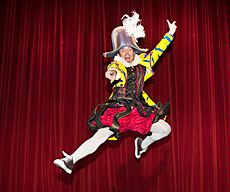 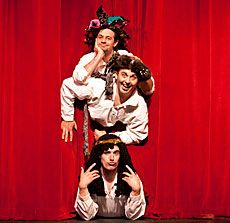