Utah State University’s Sachin Pavithran, assistive technology specialist at the Center for Persons with Disabilities, has been involved in the development of a car that can be driven by someone who is blind. That car will be featured on Sunday morning, March 6, on NBC’s Today show.

Pavithran, who is blind, is a member of the research and development committee of the National Federation of the Blind.

The vehicle, a modified Ford Escape, debuted last month in a pre-race demonstration at Daytona. Driver Mark Anthony Riccobono not only navigated 1.5 miles of the course but also avoided obstacles, some stationary, others thrown randomly from a van in front of the vehicle. Riccobono directs technology, research and education programs for the NFB.

The project grew out of NFB’s Blind Driver Challenge, which sought to apply non-visual interfaces to driving.

“The consensus was to get something that would give enough information to the driver so they could make decisions on their own,” Pavithran said. “They wanted a car that a blind person could drive, not a fully-automated car.”

The research and development committee provided feedback to a team of two graduate students and 12 undergraduate students led by Dennis Hong at Virginia Tech. The NFB committee helped the researchers to understand what would and would not work in a design — and why. Hong said one member of the student team is blind and that part of the team’s research was exploring what it would be like to be blind. They even slept over at NFB’s Baltimore headquarters to gain some valuable feedback.

The result of their research was a car that can be driven by a person who cannot see. The car has a complex, three-part system. First, it receives information from lasers, cameras and global positioning satellite technology. The next step involves computing that information in a way that identifies exactly where the car is on the road. Third, that information is transmitted to the driver in a non-visual way. This was done through DriveGrip, or gloves that vibrate on the knuckles to signal how to steer, and SpeedStrip, a vibrating seat that communicates speed information.

Both Pavithran and Hong said they don't expect a car company to adopt the technology right away. Hong said it won’t be available as a product until it’s proven to be as safe as — or safer than — a car driven by sighted people. Planes are now flown by autopilot, he said; it’s become an accepted practice. Maybe someday the technology developed by the Virginia Tech team will reach that level of development and acceptance.

For now, Hong expects spin-off technologies that will benefit all drivers, such as sensors that can detect objects through heavy fog. Other spin-off inventions may be applied to household appliances or the workplace. In these applications they can increase the employability and independence of people with visual disabilities.

“On Jan. 29 we made history,” Hong said. “I’ve been getting hundreds of e-mails from people all over the world.”

Most of them were thank-yous.

“It’s giving hope to the blind.”

“This is another breakthrough in the field of assistive technology for the blind,” Pavithran said. “It indicates that blindness could be overcome if the right tools and skills have been obtained.”

USU Center for Persons with Disabilities 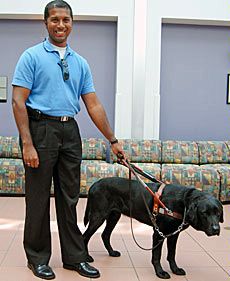 Utah State University's Sachin Pavithran, assistive technology specialist at the Center for Persons with Disabilities, has been involved in the development of a car that can be driven by someone who is blind.