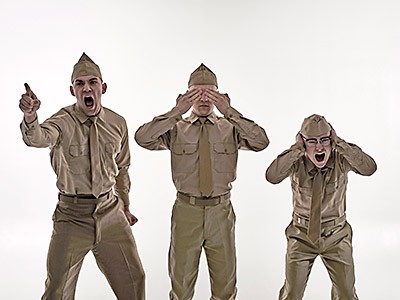 Cast Members from the Utah State University production of "Dogfight" playing April 19-23 at the Caine Lyric Theatre in downtown Logan. (from L to R) Max Falls, Zedrick Evans and Cade Peirce. The production is presented by USU's Department of Theatre Arts in the Caine College of the Arts.

Dogfight, a musical with music and lyrics by Benj Pasek and Justin Paul, takes stage at the Caine Lyric Theatre in Logan April 19-22 at 7:30 p.m. and April 23 at 2 and 7:30 p.m. The musical is based on the 1991 movie of the same title. It is presented by Utah State Theatre, the production program in USU’s Department of Theatre Arts.

The musical follows a group of marines in the 1960s who stage a “dogfight,” a competition on their last night stateside to see who can find the ugliest date the night before they go to war, which also happens to be the eve of the assassination of President John F. Kennedy.

One of the soldiers, Corporal Eddie Birdlace, meets a girl named Rose who he sets his sights on for a date to the dogfight. It backfires, as Rose breaks through Eddie’s tough exterior and causes him to rethink his stance on the competition.

“The play has themes of forgiveness and camaraderie,” director Jason Spelbring said. “People often vilify the marines without looking at the whole picture and realizing that we’re taking men who are trained for war and placing them in an urban setting. It’s their last night stateside before they ship out to Vietnam.”

Spelbring calls Rose the moral compass of the play.

“While Rose is softening Eddie’s hard shell, ironically right before he’s about to leave for war, the other marines are hardening up in preparation for their Vietnam tour,” Spelbring said. “I want audiences to be able to watch this musical and see it from both sides. Boland and Berenstein [characters in the show] are one perspective, while Rose is the other, and Birdlace begins to fall in the middle of the spectrum.”

There are two numbers in the musical where the characters are said to be walking.

“It’s a challenge for our designers to convey the action,” Spelbring said. “They created a set that has six sliding panels and a 20 foot treadmill under the proscenium. In the walking scenes, the six panels slide back and forth to create the illusion of movement.”

Dogfight is the movie equivalent of an R rating. Due to adult content, children under the age of 12 will not be admitted.

“We are producing the play that was written,” Spelbring said. “We are not adjusting it for our audiences. It is real, it is raw and it is also extremely touching and moving.”

A six-piece live orchestra accompanies the show, a return to live music for a production at the Caine Lyric Theatre.

“There is something that happens when you have a live orchestra in the room with you as opposed to the feeling of prerecorded music,” Spelbring said. “You’ll hear music and language from the 60s along with spot-on period costumes.”