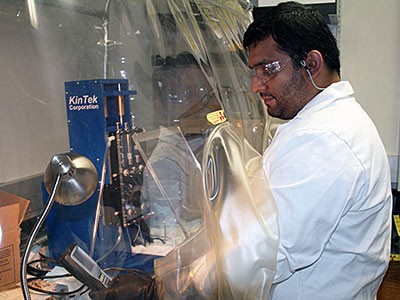 USU alum Karamatullah Danyal, PhD'15, a postdoc at the University of Vermont, in the lab of USU Biochemistry professor Lance Seefeldt. Danyal is lead author of a paper, published with Seefeldt and colleagues, in the Oct. 3 Early Edition of 'PNAS.’

Oft-repeated adages praise the virtue and added efficiency of cooperative effort: “Many hands make light work,” “Together, we’re greater than the sum of our parts” and the like. Utah State University biochemists and colleagues report a tenacious enzyme that uses a similar principle to break nitrogen’s unrelenting bonds and convert the life-critical gas into ammonia to fuel the world’s food supply.

“Scientists have long assumed the two symmetrical halves of this enzyme, known as ‘nitrogenase,’ worked independently to produce ammonia,” says Karamatullah Danyal, 2015 USU doctoral graduate, postdoctoral associate at the University of Vermont and lead author on the paper. “Our computer simulations revealed otherwise.”

“A kinetic model where the two halves of nitrogenase worked independently didn’t match new data from our laboratories,” says Seefeldt, an American Association for the Advancement of Science Fellow. “When we reconstructed the motion of nitrogenase in a simulation, we found each half worked in tandem to regulate electron movements; an unusual observation in catalysis.”

Raugei, a computational chemist at PNNL, likens the enzymatic process to a two-stage engine.

“When one half is pumping out ammonia — the ‘exhaust’ — the other half is loading the fuel in,” he says. “All of this is achieved by complex communication between the two halves.”

The team’s work is supported by a grant awarded through the U.S. Department of Energy Office of Science’s Energy Frontier Research Center program to the Center for Biological and Electron Transfer and Catalysis or “BETCy.” Based at Montana State University, BETCy is a seven-institution collaboration, of which USU is a partner.

Seefeldt and his students have long studied how nitrogenases convert nitrogen to ammonia.

“We live in a sea of nitrogen, yet our bodies can’t access it from the air,” he says. “Instead, we get this life-sustaining compound from protein in our food.”

While all living things require nitrogen for survival, the world depends on only two known processes to break nitrogen’s ultra-strong bonds and allow conversion. One is a natural, bacterial process and the other is the century-old Haber-Bösch process, which revolutionized fertilizer production and spurred unprecedented growth of the global food supply, but carries a heavy carbon footprint.

“By understanding nitrogenases, we can work toward development of less pollutive, more energy-efficient ammonia production that holds promise not only for food production, but also for development of environmentally cleaner energy,” Seefeldt says. 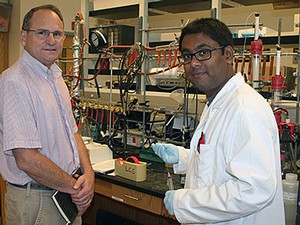 USU Biochemistry professor Lance Seefeldt, left, and doctoral student Sudipta Shaw are among authors of a paper detailing new findings about the process of nitrogen fixation. Their research is supported by the U.S. Department of Energy. 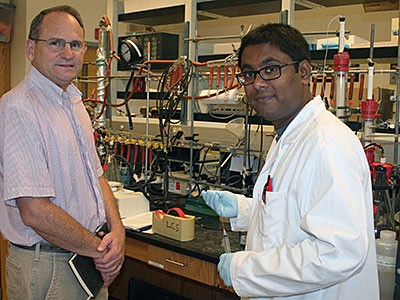