Utah State University folklorist and professor of English Barre Toelken has been awarded the Chicago Folklore Prize for his latest book, The Anguish of Snails. The award was made at the 2004 American Folklore Society meetings held in Salt Lake City October 13-17.
The Chicago Folklore Prize is given annually for the best folklore book throughout the world and is the most prestigious award for scholarly work in that field, according to University of Chicago’s Philip V. Bolman in his announcement of the award. Toelken shares the 2004 Chicago Folklore Prize with Enrique Lamadrid of the University of New Mexico for his book Hermanitos Comanchitos.
“These outstanding books underscore the tremendous importance of native American and ethnic studies to the field of folklore and beyond,” Bolman said.
“I have read Toelken’s work throughout my career, and it has influenced me in immeasurable ways,” Bolman said. “The power of Toelken’s writing lies in its everydayness, that is, its combinations of wisdom and gentleness, and the strength it displays through example.”
The Chicago Folklore Award is the oldest award of its kind, honoring since 1928 the best folklore book internationally. The award is chosen by anonymous judges. For more information on Barre Toelken, The Anguish of Snails, or the department of English at Utah State, call (435) 797-3858. 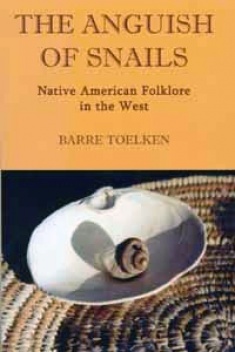