Former Utah State University President Stanford O. Cazier has died. News of his death was announced Thursday, March 14. President Cazier led the university during more than a decade of growth and expansion.

“We are saddened to learn of the death of our friend and former president Stan Cazier,” said current USU President Stan Albrecht. “He will be remembered first as a popular history professor by many. As president, he was on hand to lead the university’s centennial celebration. His contributions to Utah State University were many.”

Cazier became USU’s 12th president following the retirement of Glen L. Taggart in 1979. He had previously served as an assistant to President Taggart prior to becoming president of California State University, Chico, in 1971.

He began his teaching career at USU in 1960 as an assistant professor of history. He was named Teacher of the Year in 1966. After earning his doctorate from the University of Wisconsin, he was named head of USU’s History Department, but in 1967 he took a leave from Utah State to become an American Council on Education Fellow in academic administration at New York University. There, with the support of a Ford Foundation Fellowship, he worked as an administrative intern and assistant to the president of the university. He returned from New York University to again serve as an assistant to President Taggart, while also serving as assistant provost and department head.

"Professor Cazier gained a reputation as the premier teacher because of his capacity as a lecturer,” said Ross Peterson, a former student and later a colleague at USU. “His classes were amazingly dramatic, challenging and rewarding. I had the privilege of having five classes with him, and he convinced me to become a professor. However, I remember him more for how much he helped people. When the east winds blew trailers over in the fall of 1964, he led the faculty in raising money to help the students.  His entire mode of operation was to provide opportunities for students."

In 1971, he left Utah State to become president of California State University, Chico, where he served for eight years, then returned to Utah as Utah State University’s president in 1979. Following his retirement in 1991, the Cazier Science and Technology Library was named in his honor. That facility is now a part of the Merrill-Cazier Library at USU. Additionally, he was a member of the Old Main Society.

At the time of his retirement, The Deseret News published an overview of Cazier’s time as USU’s president.

“Cazier has been a staunch defender and advocate of USU, traveling constantly to promote the school's interests and tirelessly making known his conviction that the Logan-based institution ‘is a finer university than most people in Utah realize,’” the Deseret News wrote. “Certainly, much of what the school has become can be attributed to Cazier’s leadership since he took office in June 1979. During his tenure, enrollment has grown by 50 percent; private giving for scholarships, facilities and programs has increased three-fold; several new buildings have been constructed on campus; new distance-learning programs have been started to teach classes at sites scattered throughout Utah and a number of new on-campus education programs have been implemented.”

Following his retirement he returned to the classroom where he remained a full time professor until 1997. Since then, he continued to teach classes as a professor emeritus.

A native of Nephi, Utah, Cazier earned an undergraduate degree from the University of Utah in 1952, where he also earned a master’s degree in 1956. He earned his doctorate in history, studying under the well-known historian Merle Curti at the University of Wisconsin. He taught one year at the Bronx Community College before joining the faculty at USU. He married Shirley Anderson, who was known as a gracious and popular first lady at Utah State University. She died Feb. 16, 1999. 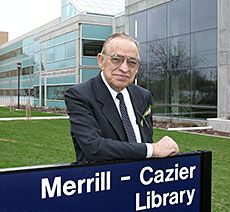