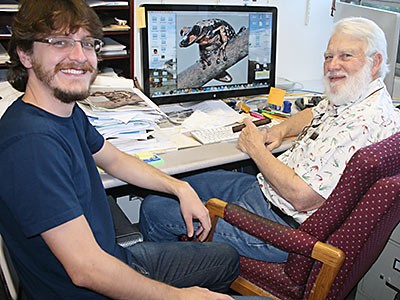 USU Biology professor Edmund 'Butch' Brodie, Jr., right, and toxinologist Pedro Mailho-Fontana of Brazil’s Butantan Institute view an image of a venomous frog, one of two species described by the researchers and their colleagues.

Utah State University biologist Edmund “Butch” Brodie, Jr. is among a team of scientists who’ve made a startling discovery about at least two species of helmeted tree frogs found in regions of Brazil: they’re venomous.

But what about the well-known poison dart frog, one might ask. Poisonous is not the same as venomous, Brodie says.

“A poisonous animal has toxins that must be inhaled or ingested by another animal to cause harm,” he says. “To be described as venomous, the organism must have a delivery mechanism — such as hollow fangs in vipers — to introduce its toxins into other animals.”

In the case of the “hylid” or arboreal frogs Brodie is studying with colleagues from the Butantan Institute, Brazil’s premier biomedical research center, and the University of São Paulo, the amphibians use sharp spines poking out of their skulls to ‘head-butt’ predators and inject deadly venom. The scientists report their findings, the first known description of venomous frogs, in the August 6, 2015, issue of Current Biology.

“This is one of those ‘once in a career’ discoveries,” Brodie says. “It’s really strange and bizarre.”

“Unlike many frogs, these species can actually turn their heads,” Brodie says. “They use this motion to defend themselves with their head spines.”

The small frogs’ venom is a formidable weapon, lying in wait in beds of granular skin glands about the creatures’ heads and ready for immediate delivery through the bony spines. The yellow-skinned C. greeningi, which favors dry, rocky crevasses, has venom twice as toxic as that of the pit viper. The orange and black A. brunoi, which lives in humid rain forests, produces venom a walloping 25 times stronger than that of the pit viper.

Jared was the unfortunate recipient of a jab on the hand from C. greeningi and spent a day in agony, with excruciating pain radiating up his arm. Doctoral student Mailho-Fontana, a toxinologist who is currently spending six months in Logan studying with Brodie, says scientists don’t know the exact composition of the venom, though it has enzymes similar to those found in snake and spider venoms.

“We don’t know of any animal that successfully feasts on these frogs,” the USU professor says. “Nothing can get past the head spines.” 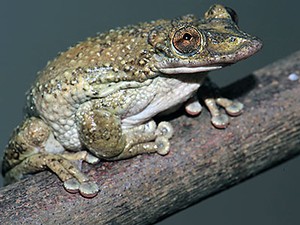 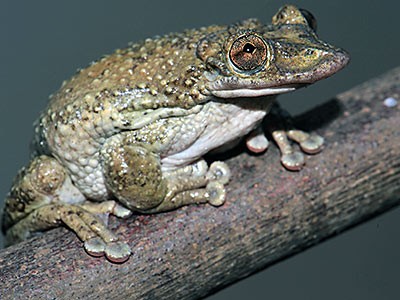 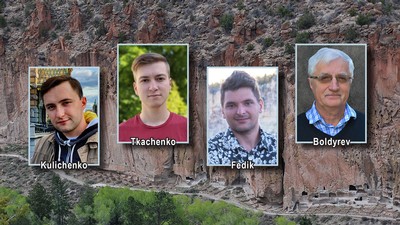 Using phylogenetics, Prehistoric Museum curator Joshua Lively describes a new genus of mosasaur that roamed the oceans toward the end of the Age of Dinosaurs.