A musical within a comedy, The Drowsy Chaperone, opens June 27 at the historic Caine Lyric Theatre in Logan, 28 W. Center Street, as part of the Old Lyric Repertory Company’s 2013 summer season.

“When I first saw this show, I knew it would be a perfect production for the Lyric,” said Dennis Hassan, artistic director of the OLRC and professor in the Caine College of the Arts. “It celebrates good, old-fashioned, musical fun with big tap numbers, funny characters and classic romance.”

The story — or plot — begins when a die-hard musical theater fan plays his favorite cast album on his turntable and the musical literally bursts into life in his apartment. The show is a rambunctious tale of flappers, gangsters, divas and Latin lovers.

“This show has an incredibly clever script with a fresh approach to old traditions,” said Jim Christian, director and musical director of the show. “With all the colorful characters regularly found in comedy present in this musical, audience members will be laughing themselves silly.”

The cast includes a list of longtime OLRC favorites, including W. Lee Daily as the man in the chair, as well as Tamari Dunbar, William Grey Warren and Lego Louis, the headlining duo seen in the OLRC’s production of The Odd Couple.

Opening June 27, The Drowsy Chaperone runs on selected dates through Aug. 10. Also a part of the 2013 season are Nunsense, The Odd Couple, James and the Giant Peach and The Woman in Black. A complete summer schedule is online.

This year marks the 100th year of the Caine Lyric Theatre and a special performance celebrating the anniversary will be held July 29.

“The Drowsy Chaperone, with its unforgettable characters, extravagant costumes and remarkably talented cast, is perfect for our 100th anniversary season,” said Hassan.

For more information and tickets, visit the Caine College of the Arts Box Office located in room 139-B of the Chase Fine Arts Center on USU’s Logan campus, call 435-797-8022 or check online at the college’s Production Services website. The Box Office is open from 9 a.m.-5 p.m., Monday through Friday. Tickets may also be purchased at the Caine Lyric Theatre Monday through Friday 1-4 p.m. and one hour prior to curtain on show nights. 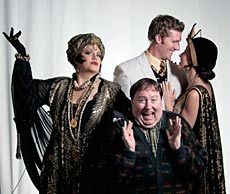 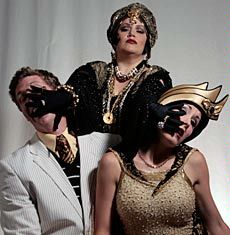 Whatever they did, they better not do it again. 'The Drowsy Chaperone' is the third of five shows presented by USU’s Old Lyric Repertory Company this summer. It plays at the Caine Lyric Theatre in downtown Logan. (photo courtesy OLRC) 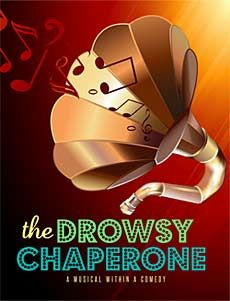