Pumpkins are a popular commodity this time of year, but those found in stores, gardens, houses and on doorsteps don’t usually weigh 200 pounds like the pumpkins grown in this year’s first Utah State University Giant Pumpkin Growing Contest.

Students who participated successfully grew four giant pumpkins, the largest of which weighed 262.5 pounds. But something so large requires a lot of work said Plants, Soils and Climate professor Scott Jones.

“There’s a lot of daily care in making sure the conditions, temperatures and all kinds of things that you don’t think about are on track,” said Jones who suggested the idea of a pumpkin growing competition last spring to students in his environmental soil and water science course.

Students first planted their seeds in April and after ten days in a greenhouse, planted them in the soil. Though cold weather threatened to kill the seedlings, students took preventative measures by either putting a heating coil in the ground or sheltering the plant with plastic houses.

Less predictable obstacles arose, however, that students weren’t quite prepared for, including the hungry bellies of local deer.

“Fear of deer did give me sleepless nights at times,” said Kashifa Rumana, a master’s student in environmental soil physics whose pumpkin took second place.

The careful watch and care of giant pumpkins is perhaps one of the reasons that Matt McConkie, record holder of Utah’s largest pumpkin weighing 1,600 pounds, told students at the beginning of the competition that most farmers don’t grow giant pumpkins. Those who do, simply do it as a hobby, he said.

“The amount of work involved in growing the pumpkin was a lot and investing at the right time was equally important,” Ramana said. “But the contest provided a platform to better understand plant growth by implementing theory taught in classes and interacting with students and professors to exchange ideas on how it’s done.”

Jones hopes to do the competition again next year. He’s even started to think of new ideas like hollowing the insides of the pumpkins and floating them on First Dam or maybe challenging another college or department. 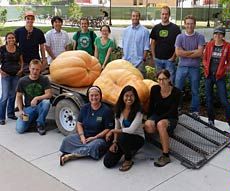 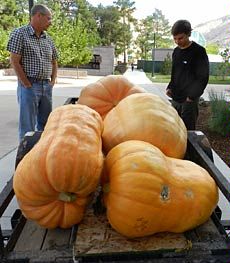