The Old Lyric Repertory Company opens the final season production Relative Values Thursday, July 13. The production continues July 14 and 15, then joins the OLRC’s three other productions in a rolling repertory schedule that concludes Aug. 5.
The English satirist Sir Noel Coward wrote Relative Values in 1951 as a comedic look at the British class system as it collides with Hollywood.
During the play the Countess tries to convince herself that “nowadays all social barriers are swept away and that everybody is as good as everybody else … and that the suggestion of class distinction is laughed at.”
No one believes her.
In this high-class comedy where everything is relative, Nigel, the Earl of Marshwood, falls in love with a glamorous movie star. Nigel brings his fiancée to his ancestral home to the horror of his mother and the servants. Not only is the fiancée a Hollywood star, but she’s also the lost sister of a long-time servant in the household, Moxie. Charades to hide the truth fall to pieces, as past flames return and shocking revelations come to the surface.
In the Noel Coward tradition, farcical situations combine with sharp wit to keep the audience entertained while also giving them something to think about, director Adrianne Moore said.
Moore has moved the setting of the show from 1950 to the 1960s, a time that is most associated with social change.
“This comedy of language is set in the 1960s when social change was happening and there was real examination of the norms,” said Moore. “The characters in Relative Values explore the serious issues in a witty and comedic way.”
Stylish and contemporary costuming and scenery set the stage for an enjoyable evening of comedy and an examination of societal issues, Moore concluded.
Tickets are available at the Caine Lyric Box office at 28 W. Center Street in Logan. From July 19 until Aug. 5, the OLRC will present the four season productions in true rolling repertory, with the four season productions alternating.
The Old Lyric Repertory Company was founded by Vosco Call in 1967 to be a professional company and as a training ground for advanced theatre students. Located in Logan, Utah, the OLRC is one of the last theatre companies in the West to offer a season in rolling repertory. The company is based in the department of theatre at Utah State University. The OLRC is supported by grants and gifts from the Marie Eccles Caine Foundation, the George S. and Delores Dore Eccles Foundation, the College of Humanities, Arts and Social Sciences at Utah State University, the Cache County Restaurant/RAPZ Tax, the Utah Arts Council and the Bridgerland Travel Council.
Season Performance Schedule:
Evening performances begin at 7:30 p.m. and Saturday matinees begin at 2 p.m.
Noises Off: Saturday, July 1 (matinee and evening); Thursday, July 20; Friday, July 28; Friday, Aug. 4.
Route 66: Friday, June 30; Saturday, July 22 (matinee and evening); Thursday, July 27; Wednesday, Aug.  2.
Postmortem: Thursday, July 6; Friday, July 7; Saturday, July 8 (matinee and evening); Friday, July 21; Saturday, July 29 (matinee and evening); Thursday, Aug. 3.
Relative Values: Thursday, July 13; Friday, July 14; Saturday, July 15 (matinee and evening); Wednesday, July 19; Wednesday, July 26; Saturday, Aug. 5 (matinee and evening). 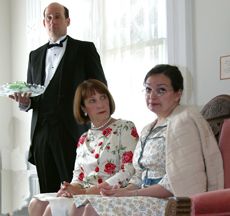