The Opera Theatre program at Utah State University, based in the department of music, presents four performances of Copland’s The Tender Land Nov. 9, 10 and 11 at the Caine Lyric Theatre, 28 West Center Street, Logan.
Originally written for young artists and commissioned by Rodgers and Hammerstein for the League of Composers’ 30th anniversary, the opera premiered in 1954.
Thirty-seven undergraduate opera theatre participants present this folk-like drama about a young Iowa farm girl, Laurie Moss, who is graduating from high school in the 1930s.
Lynn Jemison-Keisker, director of opera theatre at USU, described the plot for the opera.
Feeling overprotected by her mother and grandfather, Laurie longs to see what lies beyond her quiet, rural midwest home.
Two itinerant farmhands, Martin and Top, bring excitement into Laurie’s world when they arrive looking for work on her grandfather’s farm during the late spring harvest. Laurie falls in love with Martin and plans to elope with him. But the two workers decide to leave, and Martin regrets not having a proper life to offer Laurie.
Although disillusioned and hurt, Laurie leaves home, feeling that she must make her own way in the world. Her mother seeks consolation in the upbringing of her younger daughter, Beth, renewing a rural cycle of life.
Dancing, fiddling and great singing highlight this American opera to be enjoyed by all ages, Jemison-Keisker said.
Performances begin each evening at 7:30 p.m., as well as a matinee on Saturday, Nov. 11, at 1 p.m. Tickets can be purchased at the door one hour before performances. General seating is $10, seniors $5 and all students, Utah State University faculty and staff free with ID.
Guest director is Rachel M. Harris, returning after great success with the 2005 USU opera production of Smetana’s Bartered Bride. Costume designer is Diane Lee.
Production costs are supported in part by the Marie Caine Foundation, and the performances are given by permission with the international music publishers Boosey and Hawkes.
Contact: Lynn Jemison-Keisker (435) 797-3038, cell: (435) 770-4248 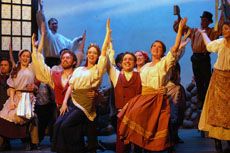