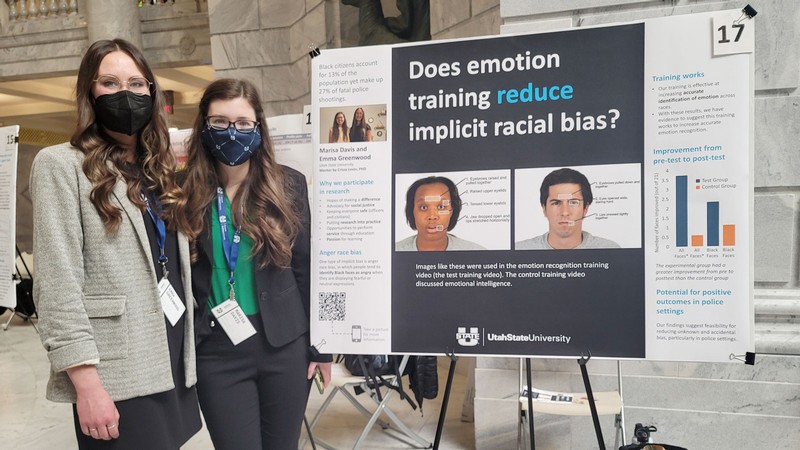 Emma Greenwood and Marisa Davis present their research at the Utah State Capitol in February. Greenwood and Davis are taking their findings to the national event. 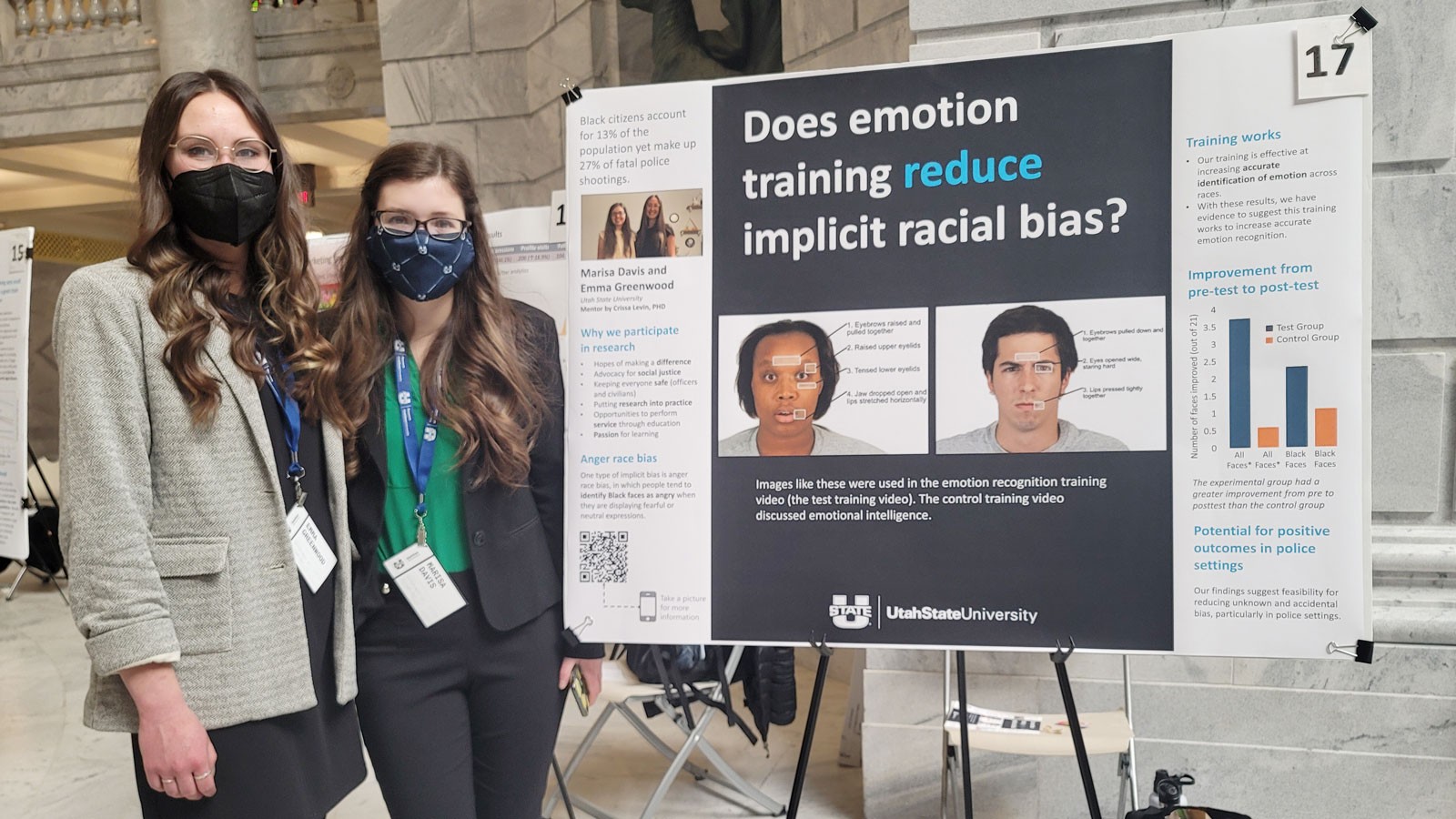 Marisa Davis and Emma Greenwood, undergraduate students in the Psychology department of the Emma Eccles Jones College of Education and Human Services at Utah State University, will present at the Council on Undergraduate Research’s Posters on the Hill 2022. Davis and Greenwood are among only 60 students across the nation who have been accepted to present at Posters on the Hill.

Davis and Greenwood’s project studies anger race bias, which is a tendency to misinterpret an individual’s facial expressions due to their race. For example, a Black person who is displaying an expression of fear or neutrality is more likely to be perceived as displaying anger or hostility. Davis and Greenwood are studying anger race bias as it relates to police brutality toward Black individuals, who are shot and killed by police more often than other demographics.

“I chose to participate in this project because it was a way for me to personally make a difference when it comes to police brutality,” Greenwood said. “The project has allowed me to contribute to a safer and more just community.”

The student researchers presented their work to legislators at the statewide Research on Capitol Hill conference and are excited to represent USU at the national level.

According to Alexa Sand, associate vice president for research, USU has sent at least one student researcher to the national event every year for the past 15 years.

“It’s an enormous honor,” she said. “Only one or two projects from each state are selected each year.”

Under the mentorship of Psychology Professor Crissa Levin, Davis and Greenwood have developed a brief training on interpreting facial expressions and have tested its effectiveness with undergraduate students at USU. They hope that this research can eventually be used in training for police departments, potentially decreasing police shootings of unarmed Black civilians.

Levin stated that this research is unique because rather than identifying or confirming known problems, it focuses on exploratory research concepts in search of potential solutions.

“We’re looking at solutions that tie directly to the problem, which is something I’ve never seen in the literature before,” she said. “We’re developing something really novel to see if it's worth chasing, to see if we have an idea that could actually keep communities safe instead of just explaining why communities aren’t safe.”

Posters on the Hill is an important opportunity for student researchers to connect their work to policymakers who can use it to make more informed decisions. The event also helps reinforce the value and impact of undergraduate research, something that Levin counts as equally important to the continued support of research and growth of students.

“Emma and Marisa have grown so much as critical thinkers and engaged citizens in doing this research,” Levin said. “Their engagement in this project has given them the opportunity to advocate for what we all hope might be a better future. They are able to display passion and compassion while maintaining scientific integrity, as well as critical thinking and thoughtful dialogue when faced with opposition or dismissal of their research.”

Davis also stated that her participation in this project has brought considerable growth.

“I have learned how the research process works, used my knowledge to help others, and developed my confidence as a student and a researcher,” she said.