Steven Folkman, a USU professor of mechanical and aerospace engineering, has completed a pipe materials study that involved 188 utilities representing approximately 10 percent of the nation’s installed water main pipe network. Water main break rates are calculated for all pipe materials used in the transport of water to create a measurement and to judge pipe performance and durability. The study will help prudent decision-making as it relates to repairing and replacing underground pipes.

A major finding of the study is that PVC pipe has the lowest overall failure rate when compared to cast iron, ductile iron, concrete, steel and asbestos cement pipes. Another major finding is that corrosion is a major cause of water main breaks.

Other findings include a new national metric of 264 people per 1 mile of pipe connections regardless of utility size. The average age of the failing water mains is 47-years old and 22 percent of all water mains are over 50-years old. The study also found that eight percent of all installed water mains are beyond their useful life and that the use of trenchless technologies will continue to increase with directional drilling as the most widely accepted technology with a higher satisfaction rating. In fact, 74 percent of utilities are considering directional drilling in the near future, said Folkman.

Folkman’s study contributes to the continuing efforts of the EPA’s Aging Water Infrastructure research and the American Water Works Association (AWWA). The study can be found on the web.

Folkman is a registered professional engineer, a member of American Society for Testing and Materials (ASTM) F17 Plastic Piping Systems, a member of AWWA and a member of the Transportation Research Board Committee on Culverts and Hydraulic Structures. He has oversight of USU’s Buried Structures Laboratory which been involved in analysis and testing of all kinds of pipe and associated structures for more than 50 years and is recognized as one of two laboratories in the United States for performing large scale tests on buried pipes. Folkman’s expertise includes structural dynamics, linear and nonlinear finite element analysis utilizing soil/structure interaction and testing.

USU is also home to the Utah Water Research Laboratory that has significantly contributed to water and wastewater research internationally for the last 50 years. 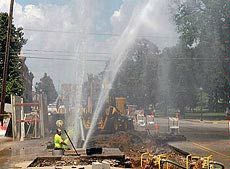