The Utah State University Opera Theatre program presents “Radio Soap Opera,” a performance of scenes from various operas written by Gian Carlo Menotti, April 13-14 at 7:30 p.m. The performance will be held in the Caine Lyric Theatre, located at 28 West Center Street in Logan.

“This performance is exciting because a great variety of works will be presented in a wonderfully entertaining way,” said Lynn Keisker, director of opera theatre and associate professor in the Caine College of the Arts.

Some of the operas that will be performed were originally written for radio broadcasts and  adapted to the stage for this performance. Scenes chosen for this performance come from Menotti’s works, including “Amelia Goes to the Ball,” “The Medium” and “The Telephone” among others.

The first half of the program will be various scenes both comedic and dramatic, showcasing Menotti’s earlier works. The second half will feature the performance of “The Old Maid and the Thief,” a radio opera written in 1939. Each scene will be preceded by a short commentary written by the composer, explaining the upcoming scene.

“The Old Maid and the Thief” is an especially comedic opera about a spinster named Miss Todd and her young maid who convince an attractive younger gentleman to stay with them. The two ladies are quite attracted to the gentleman and convince him to stay longer at no charge. The ensuing results to pay for his room and board lead to comedic occurrences as these ladies will do whatever it takes to keep the gentleman there.

“‘Radio Soap Opera’ is a really exciting idea and different from everything else I have done at USU,” said Worthington. “This show presents a great variety of operatic works to the audience and has a fun atmosphere to it.”

These scenes were directed by guest Daniel Helfgot, who arrived to work with cast members March 26. Helfot often directs for Utah Festival Opera & Musical Theatre in the summer in Logan and has previously worked with Keisker. He has directed internationally and he received the Opera Director of the Year award in 2009. Helfgot has been a part of more than 200 productions and brings an extensive repertoire to USU’s “Radio Soap Opera” production.

Menotti was born in Italy and immigrated to the United States in the late 1920s. He composed many operas, working closely with NBC to produce them. “The Medium” and “The Telephone” paired together for an unprecedented run on Broadway in 1947. Menotti received a Kennedy Center Honor in 1984 for his work.

Tickets are $10 general admission, $8 for seniors and youth, $5 for USU faculty and staff and free for USU students with ID. For more information and tickets, visit the CCA Box Office located in room 139-B of the Chase Fine Arts Center on USU’s campus, call 435-797-9022 or go online to the Caine College website (arts.usu.edu). 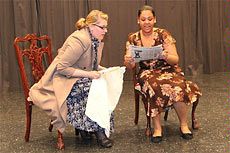 Scene from The Old Maid and the Thief by Gian Carlo Menotti: Karyn Handy as Miss Todd, and Shalayna Guisao as Miss Pinkerton. Photos by Richard A. Keisker. 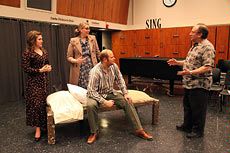