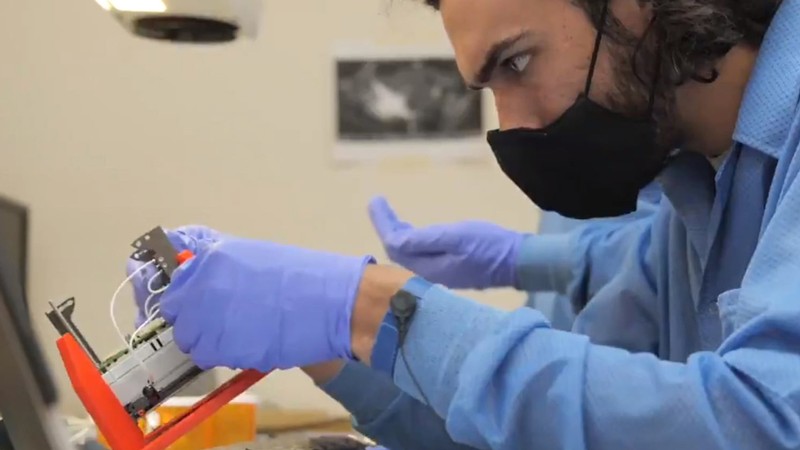 In USU's 2021 episode of 'The College Tour,’ student Jack Danos examines the GAS team’s GASPACS cube satellite. The CubeSat launches Dec. 21, to the ISS and is scheduled to deploy into space the first week of Jan. 2022. (Courtesy: The College Tour) 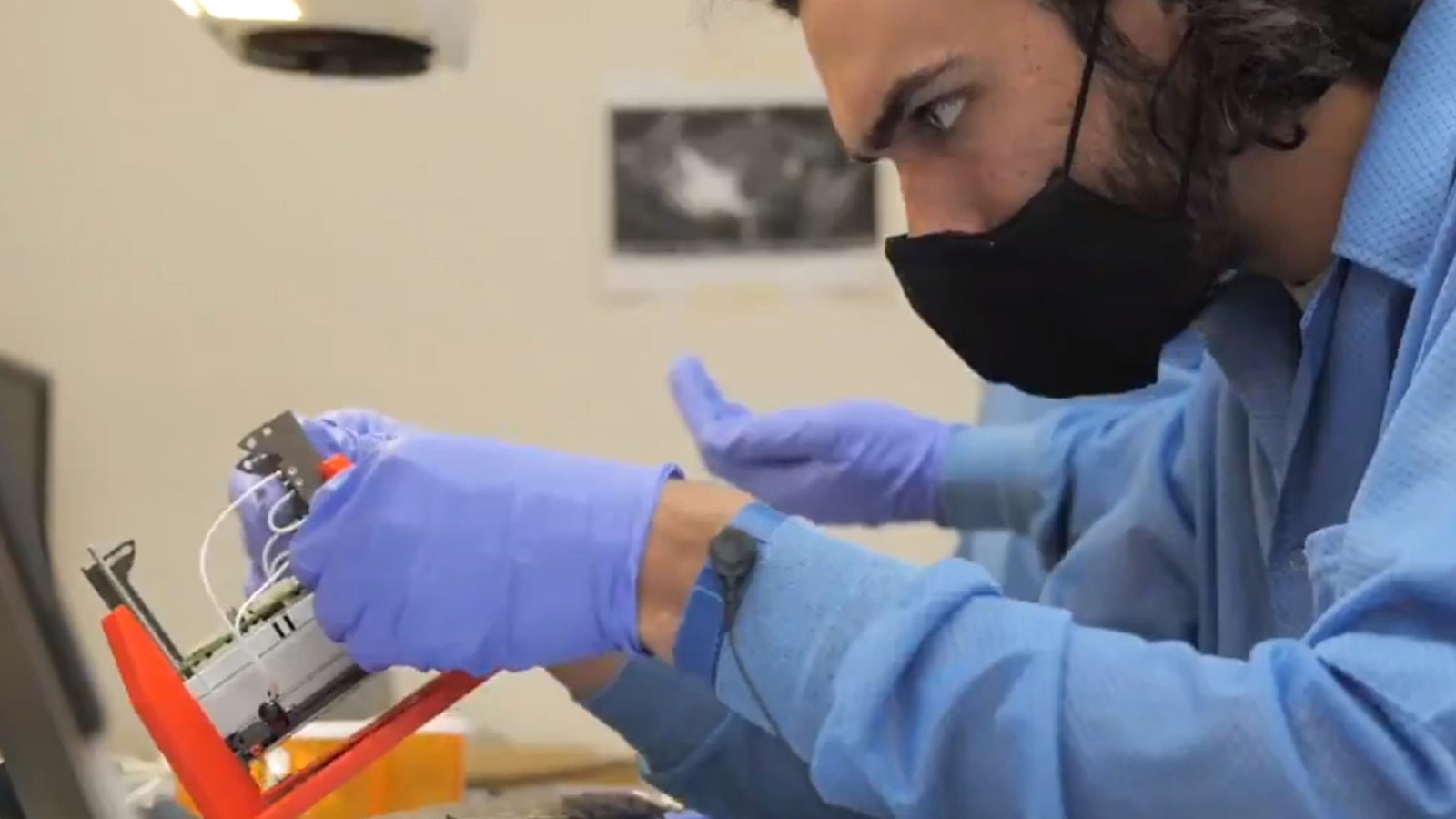 Excitement is building as 10 members of Utah State University’s renowned Get Away Special “GAS” student research team head to Florida’s Kennedy Space Center this week to watch the Dec. 21 launch of SpaceX CRS-24. The rocket is scheduled to carry the team’s GASPACS cube satellite to the International Space Station.

“Our team is set, once again, to make history,” said student GAS team coordinator Jack Danos. “This is not only the GAS Team’s first CubeSat sent into space; it’s Utah’s first, solely undergraduate-built CubeSat, as well as one of the first student-built CubeSats in the nation, to launch into orbit.”

Named GASPACS (Get Away Special Passive Attitude Control Satellite), the roughly four-inch-square spacecraft features a novel inflatable boom that addresses key challenges with deploying structures in space. GASPACS is scheduled to deploy from the ISS into orbit during the first week of January 2022.

“It takes tremendous energy and expense to get an object into space, meaning that size and weight are large limitations on satellite designs,” said Danos, an undergraduate mechanical and aerospace engineering major, who’s led the team for nearly two years. “Our CubeSat attempts to solve these problems with a compact boom, tucked into the satellite, that expands in space and acts as a passive-control mechanism.”

Danos said GASPACS will fly much like an arrow on Earth, with the inflated boom trailing behind the main body of the satellite.

“Without the boom, the satellite would slowly spin as it orbits, but the small amount of air still present in low-Earth orbit allows the satellite, equipped with the boom, to aerodynamically stabilize,” he said. “You can imagine these principles – a compact design that expands in space and a passive control solution that requires no power sources – being applied to much larger structures needed for space exploration and research.”

Launch of GASPACS marks about 20 years since the GAS Team has sent an experiment into Earth’s orbit. The team is largely responsible for USU sending more student-built experiments into space than any other university in the world. From 1982 to 2001, the team sent at least 11 payloads containing more than 30 projects into space aboard NASA’s space shuttles.

Unlike the shuttle-carried experiments, which were encased in cargo canisters and returned to the students after each mission, GASPACS will not return from space.

“With previous missions, GAS team members had the opportunity to retrieve their experiments and download and analyze the data,” Danos said. “That won’t be the case for us, so we had to build communications capability inside the satellite to transmit data back to us, while it’s still in space. We have been working hard on our ground station equipment and software to ensure we are ready to communicate with our satellite once it's deployed.”

The primary goal of the satellite, he said, is to transmit a photograph of the inflated boom back to the researchers. To accomplish this, the student team has erected an antenna on top of USU’s Dean F. Peterson Engineering Laboratory Building, from which they’ll capture data from the satellite for analysis.

“It’s been a huge undertaking and a lot of work to meet NASA’s stringent deadlines,” said Danos, who leads a team of about 20 undergraduates. “Our team members are busy with demanding classes, as well as jobs to support themselves. They’re performing professional-level space research on top of all of that.” 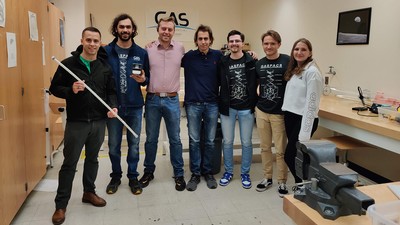 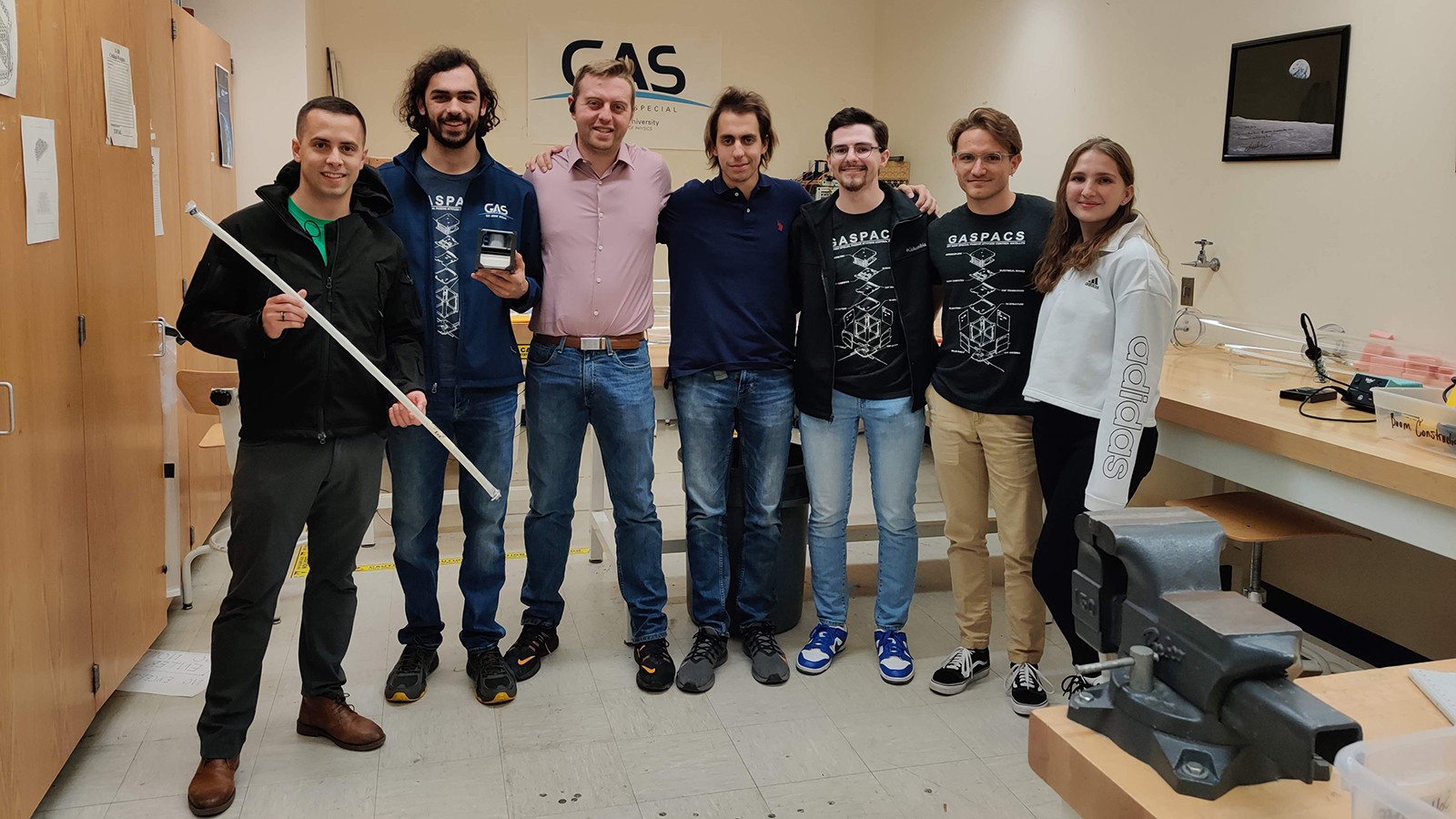