The arena looks like an iceless hockey rink with an obstacle course where coffee table-sized robots smash into each other and kick soccer balls as the crowd screams. Matches take place in dozens of arenas each year to select the top robotics teams, and Salt Lake County's 4-H robotics team has been no stranger to these events.
The team, 3230 Prototype X, placed 39th at the national championships this spring by winning five out of ten rounds at the FIRST (For Inspiration and Recognition of Science and Technology) Championships at the Georgia Dome in Atlanta.
The team won the regional championship in Las Vegas earlier in April, earning the right to compete in Atlanta.
The Salt Lake area 4-H club-based team includes coach Jim French, mentors Marcelle Smith, Jim Cook and Ed Gouffax and team members Heath French, Jake Nelson, Danny Jackman, Kevin Smith, Mason McFarland and Brennan Beecher.
FIRST robotics gives high school-aged youths the opportunity to learn about engineering while developing skills in communication, business, team work and web design.
“The kids are learning about real-world applications,” said team coach Jim French. “They get a project, complete with deadlines, and are able to create a functional robot and have fun while doing it.”
The team received a letter from Utah Gov. Gary R. Herbert congratulating members on their achievements as a rookie team building a championship competition robot.
“Placing well in the FIRST Robotics Salt Lake Regional and then winning first place in completion at the FIRST Robotics Las Vegas Regional, as well as the Rookie All Star and the Highest Rookie Seed Awards, speaks well of the quality of youth and education in our state,” he said.
The team was one of nine 4-H robotics teams selected to compete in the FIRST Championships at the regional level and is supported by a J.C. Penney Afterschool Fund grant.
Video – How the game is played.
Related links:
Utah 4-H
USU Cooperative Extension
Contact: Marcelle Smith, 4-H programming agent, (801) 468-2695, Marcelle.Smith@usu.edu
Writer: Dennis Hinkamp, (435) 760-0926, dennish@ext.usu.edu 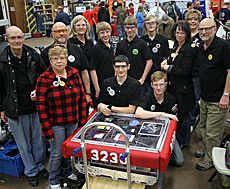 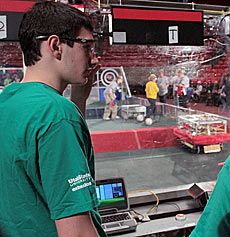