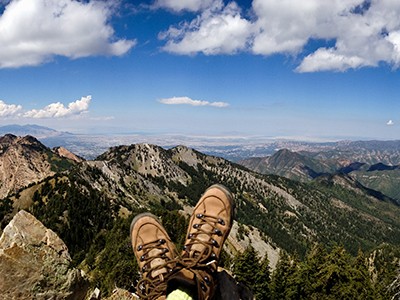 A view of Mt. Raymond, one of the areas being considered to include a fee usage. Image by USU's Jordan Smith.

It’s less than the cost of bug spray – but to some people and their wallets, that amount still matters – and affects where they visit outdoors, recent research by Chase Lamborn, and others at Utah State University’s Institute of Outdoor Recreation and Tourism has found.

Recreation fees change how people use public lands, even when the actual cost seems insignificant. Millcreek Canyon, for instance, charges just $3 per day per vehicle. This high-mountain retreat of meandering mountain bike routes, narrow hiking trails and simple picnic areas in the Central Wasatch Mountain of northern Utah has plenty of paying visitors. There are also other spots nearby to wander through the wildflowers or pump a bike up a rocky path without handing over cash. The question that Lamborn posed was this: Do the same kind of people use both places?

No, it turns out they don’t. Although there wasn’t any difference in the makeup of the overall race, ethnicity, age or even the types of recreation the two groups were interested in, there were significant differences in annual household income. A fee – even a $3 one – displaced low-income recreationists. In fact, low-income people (who earned less than $25,000 per year) drove out of their way to avoid the fee. They traveled three times as far to reach the “cheaper” alternative.

The majority of recreation areas in the Central Wasatch Mountains don’t require a fee. But that may change. As the burgeoning population around nearby Salt Lake City expands, so does demand on recreation sites. The Uinta-Wasatch-Cache National Forest is considering a $6 per-vehicle fee to access areas that have up to know been free of charge.

Charging fees for access to recreation on public lands makes sense on many levels, Lamborn said. Extra cash helps land management agencies maintain natural areas with direct help from the people who use them. It helps sites be less vulnerable to the whims of federal and state budget allocations. Fees can even be used as a tool to constrict the number of people flocking to overused areas. But for many people, it feels philosophically wrong. Some recreation planners believe the benefits you get from fees are irrelevant because public lands should be public … open to all members of a community, not just those who can afford it. And that on-site fees are actually demanding double payment for a single service (after personal income tax).

Both sides are right, which makes it such a sticky scenario for land managers to negotiate. Since user fees are actually under consideration at these sites, managers should expect a shift in the socioeconomic composition of visitors and should anticipate displacement and increased use at nearby non-fee settings, according to Lamborn. They should work to ensure that displacement does not become exclusion. After all, money doesn’t grow on trees.

The article, COVID-19 in Rural America: Impacts of Politics and Disadvantages, shared information from the study showing that counties with high percentages of Donald Trump voters had higher per-capita cases of COVID-19.

The 2021 theme is "Prepare to Protect. Preparing for disasters is protecting everyone you love."