Picture the disheveled genius who worked on relativity and “the Big One” meeting the obscure, stylistic painter and getting together for a few drinks and friendly conversation. Just imagine the topics and confusion that fill the pub. Imagine the misunderstandings, the confused looks and the laughter that are included. Imagine the possibility.
Utah State Theatre realizes this scene with the production of Steve Martin’s Picasso at the Lapin Agile. The Caine Lyric Theatre stage (28 W. Center Street) welcomes two iconic characters Feb. 9–11 and 15–18 at 7:30 p.m. Utah State Theatre is the production arm of the department of theatre at Utah State University.
Actor and comedian Steve Martin is easily recognized for his film roles in Hollywood or his multiple stints on Saturday Night Live. What he is not noted for is his talent in writing, said production co-director Kevin Doyle.
“A lot of people think of Steve Martin and they think slapstick,” Doyle said. “But he has been writing essays for The New Yorker magazine for years, and there’s a wit and cleverness behind that work that we don’t often see in his films. With film we know he’s writing to his fan base, but his plays are more sophisticated, comedically and thematically.”
According to Doyle, Picasso at the Lapin Agile is an exemplary illustration of this.
Doyle said the production is charged with laughs and a bittersweet aura of hope and tragedy.
“It’s about the coming together of the potentially major shakers of the 20th century at the very beginning of that period,” he said. “Picasso meets Albert Einstein and about nine other people who, while not being quite as famous, all have a stake in the new century and something to add to it. We find out how there’s art in science and science in art. We see the hopes for the next century and the dangers that may (and do) lie ahead. We see people who care, are involved, are witty and smart, and who have just as much to offer as Einstein does to science and Picasso to art. It begs the audience to think like those at the Lapin Agile — what will be the next major movement? How will what we say, do, think now affect events in the next century? Are we on the cusp of some of the greatest achievements in world history or will the next century be cursed by war and trouble?”
Utah State Theatre’s production of Picasso at the Lapin Agile is also an opportunity for undergraduate director Richie Call to take the helm of a mainstage production, which is also a first for UST. Call, studying theatre with an emphasis in performance, is on the verge of graduate school and is pursuing directing as a course of study. Call has taken on the major tasks and artistic direction with Picasso, while Doyle has served as the advisor on the project. Call has directed numerous small, studio stage productions, but this production is a task he is ready for, with help from Doyle.
“I honestly can’t remember the last time we had a student so intent on getting a graduate degree in directing,” Doyle said. “I wish we had more students interested in pursuing a graduate degree in acting and directing, but we have a small percentage. We’ve had a good record of
students getting into great programs and getting large, full-paid scholarships the past few years, but they have all been in acting. I wanted Richie to have a capstone project that would boost his chances when interviewing with the leading theater schools he has applied to.”
Doyle said he trusts Call’s work and said he has the skills to direct a show at the level of others in the theatre department — mainstage or otherwise.
“I have been with him through the rehearsals, and I don’t question the decision to let him direct in the least,” Doyle said. “My role is to challenge him, ask him why he might be choosing to do this or that, let him run his thoughts and preparation past me. But he ran the auditions and he runs the rehearsals. He’s the lead in the production meetings and he’ll carry the process all the way through. I haven’t felt this strongly about a student’s potential in a long time, and I don’t know how long it may be before it happens again. Our stages should be extensions of our classrooms, and this is an opportunity that Richie deserves. His work and efforts prove that.”
Picasso at the Lapin Agile is the fourth Utah State Theatre production of the 2005–2006 season. Information and general inquiries about the production and Utah State Theatre are available by calling (435) 797–1500. Tickets for the production are available by calling (435) 797–0305. Prices range from $6 to $9, with group discounts available.
Picasso at the Lapin Agile is suited for patrons ages 13 and above. Please, no children. Visit the Utah State Theatre Web site for more information. 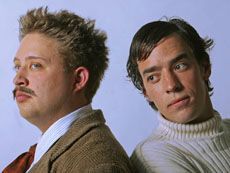 Jed Broberg as Einstein (left) and Luke Bybee as Picasso (right) can be seen in the Utah State Theatre production "Picasso at the Lapin Agile," Feb. 9-11 and 15–18.