Timema, also known as “walking sticks,” are cryptic, meaning they visually blend into their surroundings to avoid detection by predators. The multi-university research team studied two specific ecotypes of the insect; that is, distinct varieties within species that are adapted to specific environmental or ecological conditions.

“The insects we studied have repeatedly evolved two ecotypes adapted to two different host plant species,” says Gompert, assistant professor in USU’s Department of Biology and the USU Ecology Center. “The ecotypes feature different back stripes and shades of green. They also have mating differences.”

The divergent ecotypes provided an ideal model for Gompert and colleagues to explore natural selection’s role in parallel speciation — a type of parallel evolution in which certain traits that cause reproductive isolation evolve repeatedly in independent, closely related populations, as they adapt to different environments. The researchers published their findings in the May 15, 2014, issue of Science.

“To conduct our study, we analyzed whole-genome divergence between 160 stick insects from four pairs of natural populations on different host-plant species,” says Gompert, an evolutionary geneticist, who joined USU in August 2013. “We then re-sequenced 449 additional partial genomes from ecotype pairs experimentally transplanted to different host plants.”

Stick insects make cooperative test subjects, he says, because “they generally stay put (on a specific plant) for their entire lives.”

The researchers documented a genetic basis of adaptive changes in genes, along with changes in functions of genes.

“We noted a whopping, whopping enrichment in binding metal ions within these organisms,” Gompert says. “Whether the insects store specific metals for future needs or employ a mechanism to protect themselves from too much of these metals, we don’t know. This will be an interesting area for future study.”

The team’s study touches on the long-held argument of determinism versus randomness and historical contingency in evolutionary biology, he says.

“We asked ourselves: ‘If you rewound life as if it was a videotape and played it back, would you get the same results?’” Gompert says. “Our results suggest, at least partially, yes. Despite some idiosyncratic outcomes, there may be a repeatable component driven by selection — even at the genome-wide level and during the complex process of speciation.” 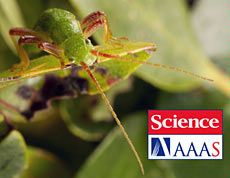 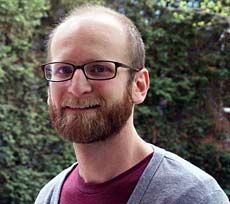 USU geneticist Zach Gompert is an assistant professor in the Department of Biology and the USU Ecology Center.