On Oct. 7, 1998, Matthew Shepard was discovered bound to a fence in the hills of Laramie, Wyo., savagely beaten and left to die in an act of brutality and hate that shocked the nation. His death provoked national attention on hate crimes and intolerance. For the town of Laramie, this became personal.
Moises Kauffman and fellow members of the Tectonic Theater Project made six trips over the course of a year and a half to Laramie. They interviewed more than 200 residents, and from these interviews Kauffman and the project members compiled these interviews and their own experiences to formulate a theatrical experience that became The Laramie Project.
The Laramie Project relates the details of the year following the murder with 10 actors who depict more than 60 people ranging from ranchers to university professors. The story shows that there are no typical stereotypes and explores the depth to which humanity can sink and the heights of compassion which we are capable, according to production director Kevin Doyle.
Utah State Theatre at Utah State University brings the project to the Caine Lyric Theatre in downtown Logan Oct. 5 through Oct. 9. The Laramie Project curtain time is 7:30 p.m., with tickets available by calling (435) 797-0305. The play contains adult language and adult themes, so viewer discretion is advised. Children under the age of 6 are not admitted.
Directing the piece is department of theatre arts professor Doyle (Antigone and A Funny Thing Happened on the Way to the Forum), who stresses The Laramie Project is a popular production that doesn’t focus on the act of murder itself.
“The Laramie Project is the most produced play in America for the last three years,” Doyle said. “That includes professional productions, college/university productions and high school productions. I think it’s significant that there were more high school productions of The Laramie Project than any other play. That means it has significance in the lives of audiences of all ages and all economic, social, cultural and religious backgrounds. The main reason it’s so popular, I believe, is that it isn’t about the young man who was killed. It’s about the people in the town he was living in at the time — friends, acquaintances, strangers and his killers — who all were affected by the young man and the events that occurred. That speaks to all audiences.
“It’s a play about community, about dealing with tragedy and trying to recognize the strength that exists in any community,” Doyle continued. “People of all backgrounds, beliefs and types rallied to come together to say ‘this wasn’t right and this is not what we stand for. We will work to see that it doesn’t happen here again.’”
Doyle said he believes the play will be received positively. “I think most patrons are used to everything this play says and tells,” he said.
“The difference is that patrons have a switch turned on in their minds that tells them they are watching fiction and so they can sit back and know that no one will really get hurt. They can suspend their beliefs for a short period of time and have some fun. The difference with this play, and other events like it, is that the audience comes into the theater understanding that everything that is said and told was and is real. These were real people grappling with these thoughts and issues. There was a real person killed. That immediacy is a very different experience than a fictional story. Plus, this happened only a few years ago so the circumstances haven’t really been played completely out. We don’t know what the real result of life in Laramie and other places will be for years to come. We have to consider our feelings and thoughts on the matter now. That’s asking a harder question of an audience than, say, a World War II story where we’ve had almost 60 years to see what the result of everything has been.”
The Utah State production of The Laramie Project is performed by 10 actors who portray a number of different, and sometimes, conflicting characters. Richie Call, Lucas Bybee, Lee Anderson, Arminta Johnson, Mindy McKinnon, Amber Dawn LaBau, Tyson Smith, John McReynolds, Melissa Thoreson and Lacey Jackson have all taken on the project with excitement and reverence, the director said.
According to actor Richie Call the process is difficult.
“It’s a challenge to play such a variety of characters, especially when some of them have such strongly opposing views,” he said. “I find myself having sympathies with all of the characters, even though some of their beliefs challenge my personal beliefs.”
“I worked with Moises Kaufman the past two summers at the Sundance Institute Theatre Lab,” Doyle said. “Since The Laramie Project he has emerged as one of the top theater directors in America today. Moises stressed that I keep it as honest as the people he interviewed were. There doesn’t need to be a great deal of affected theatricality. The audience is seeing this production in their hometown performed by other community members and its strength lies a great deal in that. There is an understanding among locals that out-of-towners may not always match.”
Doyle said Kaufman has seen hundreds of productions of his play and mentioned how it has always touched the community in a positive way.

“It is not a sensationalizing play,” Doyle concluded. “It is simple by design, making it as honest as possible. That was his biggest piece of advice to me — it has to stay honest and it has to be performed as written. There is some language in this play, some of it strong, because those were the words the people he interviewed used. It is a real event, told by real people in their own words. Keep it real and keep it honest.” 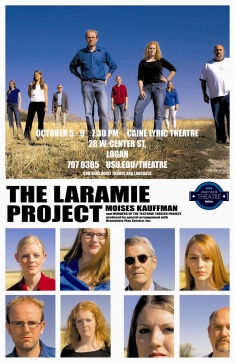