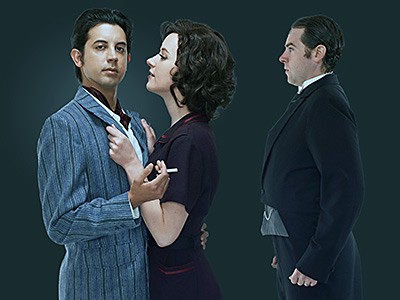 Cast members from the Lyric Repertory Company's production of "And the There Were None" include (l. to r.) Stefan Espinosa (Philip Lombard), Savannah Hubbard (Vera Claythorne) and Chris Klinger (Rogers). The mystery opens July 1 at the Caine Lyric Theatre in Logan and joins three other Lyric Rep productions in repertory though Aug. 1. (photo by Andrew McCallister, Caine College of the Arts)

The last show in the repertory rotation at the Caine Lyric Theatre this summer, And Then There Were None, opens Wednesday, July 1. The production is the final of four presented by the Lyric Repertory Company and Utah State University.

“When I picked up the script for the first read, I remember making a prediction about who the murderer was going to be from page one,” Chris Klinger, who plays the role of Rogers, said. “I figured I was well-versed in suspense and would see through the formulaic tropes I’ve come to expect and recognize so easily in today’s movies and television shows. Something peculiar began to happen as I became engrossed in the story: I found myself shifting suspicion between the characters every few pages until I had eventually suspected every single person in the play.”

Agatha Christie is a master of mystery, and she keeps the tension and suspense mounting until the very last moments, Klinger said.

Directed by Richie Call — also a Lyric Rep co-artistic director and performer in The Mystery of Edwin Drood — said And Then There Were None features ten people enticed into coming to an island under different pretexts.

“I’ve never directed a murder mystery ever before,” Call said. “Everyone should seem like they are potential suspects but you can’t just tell all the actors to be suspicious. It’s a matter of investigating each character to determine what’s going on in their minds because, while they may not be guilty of murder, they have secrets or characteristics that make them suspicious for other reasons.”

Cast member Arika Schockmel said the Lyric Rep has put together a fantastic cast, coupled with a wonderful director, Richie Call. The actress plays Emily Brent in the production.

“I am so happy to have his creative eye guiding this murder mystery,” Schockmel said.

“We have an incredible cast,” Call said. “Not to say that other versions of the show have not, but what often happens when putting together a single show is some of the peripheral characters are just ‘filled in.’ When working in a repertory situation, there are many strong actors who could be leads. Even the characters who die earlier are fantastic actors.”

Opening July 1, And Then There Were None continues July 2-3, and then on select dates through July 29. As the final production in repertory, it joins the Lyric Rep’s other three productions in rotation with Noises Off, Last Train to Nibroc and The Mystery of Edwin Drood.

For more information and tickets, visit the Caine College of the Arts Box Office located in room L-101 of the Chase Fine Arts Center on USU’s Logan campus, call 435-797-8022 or see the Lyric Rep’s website. The box office is open 9 a.m.–noon Monday through Friday. Tickets may also be purchased at the Caine Lyric Theatre in downtown Logan at 28 West Center Monday through Friday 1-4 p.m. and one hour prior to curtain on show nights.