The Old Lyric Repertory Company, part of the Caine College of the Arts at Utah State University, presents Tons of Money, opening June 19 at the historic Caine Lyric Theatre in downtown Logan.

Written by Will Evans and Arthur Valentine and revised by Alan Ayckbourn, Money is a British farce about a broke inventor who inherits tons of money, only to discover he won’t see a penny of it due to his massive debts.

“Money was originally written in 1922,” said W. Vosco Call, director of the show and founder of the Lyric Rep. “Alan Ayckbourn prepared a new version in 1986 while retaining the spirit and most of the text of the original. Tons of Money is in the true tradition of British farce.”

A British farce is a humorous play or film where the characters become involved in unlikely situations.

Co-artistic director for the Lyric Rep and grandson of W. Vosco Call, Richie Call, remembers Tons of Money being one of the first shows he saw at the Caine Lyric Theatre.

“To this day I’ve never laughed as hard as I did when I was 11 years old watching Tons of Money,” said Richie Call. “This is the year I get to play the very role that made me laugh so hard, and to top it off, my grandfather is directing me.”

In the farce, Aubrey Henry Maitland Allington is an unsuccessful inventor with a list of debts longer than his name. When financial relief arrives in the form of a large inheritance, Aubrey’s exuberance is quickly quashed when he realizes his creditors will certainly snatch up all of his newly acquired “tons of money” before he lays a hand on it. In order to escape creditors, the deeply in-debt Allington, and his wife, Louise, cook up an elaborate scheme to retain their fortune.

“Richie Call and Dennis Hassan [artistic directors for the Lyric Rep] decided to bring Money back because it was so successful last time it was at the Caine Lyric Theatre,” said W. Vosco Call. “When they asked me to direct again, I said I would be happy to.”

Opening June 19, Tons of Money continues June 20 and 21 and then on select dates through July 31. Also part of the Lyric Rep 2014 season are A Funny Thing Happened on the Way to the Forum, The Musical of Musicals, The Musical and The Elephant Man.

“I’m very pleased with this year’s season line up and with how things are going at the Lyric Rep,” said W. Vosco Call. “We’ve been running for 47 years, and I hope there’s another 47 in our future.”

For more information and tickets, visit the CCA Box Office located in room 139-B of the Chase Fine Arts Center on USU’s Logan campus, call 435-797-8022 or see the Production Services website. The box office is open 9 a.m.- noon Monday through Friday. Tickets may also be purchased at the Caine Lyric Theatre in downtown Logan at 28 West Center Monday through Friday 1-4 p.m. and one hour prior to curtain on show nights. 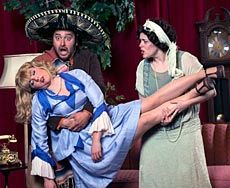 'Tons of Money' is the second production to open as part of the Lyric Rep season and plays June 19-21 and select dates through July 31. (left rear) Richie Call, Emilie Starr with (right) Lacy J. Dunn in the spirited English farce.