Utah State University’s Caine College of the Arts and Eastern Utah Theatre open the 2011-12 theater season with Kaufman and Hart’s classic American comedy You Can’t Take It With You.

Written in the mid-1930s, the play tells the story of the Sycamore family, an eccentric and loving family living life to its fullest despite having the world tell them to live according to their dictates.

This is one of the most delightful plays of the American theater, according to Corey Ewan, USU Easter associate professor of theater. The play is fast paced and features interesting characters and fireworks.

“At its heart it is a story about the importance of balancing life and work and accepting the difference and eccentricities of others,” Ewan said.

He first saw this play in 1976 as part of a theater tour from the Promised Valley Playhouse, in Salt Lake City, and played the part of Paul in a production at the Caine Lyric Theatre in Logan.

“I believe the timing for this play couldn’t be better considering the economic climate and the general sense of fear and unrest in the world and our community,” Ewan said. “It is a feel-good play and really very charming and funny.”

Eastern Utah Theatre has added three additional performances to its roster of plays in an effort to give everyone a better chance of seeing the plays, Ewan said. Rounding out Eastern Utah Theatre’s Season is Shakespeare’s Romeo and Juliet directed by Todd Olsen, See How They Run by Philip King, directed by guest director Martin Kelly, and The School for Scandal, a restoration comedy by Richard Brinsley Sheridan directed by Ewan.

“This is a solid season of comedy, farce and tragedy and we hope to see you at the theater,” Ewan said. 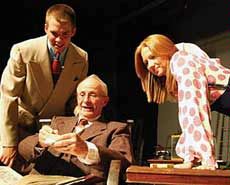