Since 2001 Utah State University aquatic ecologist Phaedra Budy has monitored the Bonneville cutthroat trout in Utah’s Logan River, home to one of the largest remaining populations of the Utah state fish. This month [January 2008], she travels to Spain to study one of the imperiled species’ key competitors for survival – Salmo trutta – or the brown trout.

Working with colleagues at the University of León in northwestern Spain, historic habitat of the brown trout, Budy will spend six months examining long-term data sets collected throughout Europe to gain more knowledge of the factors that limit these fish.

Her studies here in Utah reveal that brown trout tend to congregate in the lower reaches of the Logan River, while the Bonneville cutthroat trout favors higher elevations.

“We speculate that a combination of winter temperatures and the spring spate (floods) may limit the ability of brown trout to survive at higher elevations,” Budy says. “But climate change – global warming – could expand their habitat, which would further impact the Bonneville cutthroat trout.”

Budy’s research in Spain is funded by the USGS, the University of León, USU’s Department of Watershed Sciences, the USU Water Initiative and an ADVANCE grant from USU.

While in Spain, Budy and colleagues will compile and analyze data and prepare a proposal to the National Science Foundation to fund a meta-analysis of long-term data collected across Europe and the United States for future field studies.

“Ultimately, our goal is to understand the effects of climate change and other anthropogenic impacts on the persistence of native fishes,” she says.
Related Links: 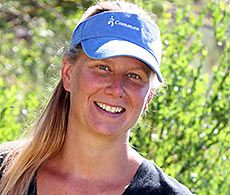 USU aquatic ecologist Phaedra Budy travels to Spain this month to study the brown trout in its native habitat.

The brown trout, an exotic species introduced to North America in the 1800s, threatens Utah's state fish, the Bonneville cutthroat trout. Photo by Dale Hepworth, courtesy of the Utah Division of Wildlife Resources.