Spending two summers snorkeling in the scenic Pacific Northwest may sound like a relaxing vacation, but the reality is a little less glamorous.

“I spent up to 12 hours each day lying face down in a stream, literally crawling across rocks, working against the current in freezing water, pulling off leeches and occasionally pushing cow poop out of my way,” says Ericka Hegeman, a master’s student in Utah State University’s Department of Watershed Sciences and Ecology Center. “But the effort was worth it. We gathered information about organisms very little is known about.”

Hegeman was further rewarded for her perseverance with an award from the Society for Freshwater Science. At the society’s 2012 conference held May 20-24, in Louisville, Ky., her paper was selected from 279 student presenters as runner-up (second place) for the best oral presentation in applied research. The award includes a certificate for book purchases and registration fee for the 2013 conference in Jacksonville, Fla.

“This is a very prestigious honor,” says Scott Miller, director of the USU-based Bureau of Land Management’s National Aquatic Monitoring Center and Hegeman’s faculty mentor. “Ericka has an unparalleled work ethic, a sharp intellect and the ability to write well. This is a well-deserved award.”

With Miller, Hegeman is studying freshwater mussels in tributaries of the Columbia River in northeastern Oregon. In a research project funded by the Confederated Tribes of the Umatilla Indian reservation, the ecologists are modeling mussel distribution in relation to multiple habitat variables.

“Mussel populations have dwindled in the Pacific Northwest due to a number of factors, including dams, agricultural activities and irrigation, grazing and timber harvesting,” says Miller, assistant professor in USU’s Department of Watershed Sciences. “The Confederated Tribes are taking a progressive approach to restoring native habitat, including habitat for mussels, which have historical and cultural significance for the Tribes.”

Less than six species of mussels exist in the western United States; an area in which they were historically common. The mollusks, which produce a bi-valved shell, range from about the size of a quarter to a half-dollar coin, are native to watersheds in the West and can live as long as 100 years. Important to food webs, water quality and nutrient cycling freshwater ecosystems of the Columbia River basin, the small creatures are efficient in filtering suspended materials such as algae, bacteria, zooplankton and sediment from streams, rivers, ponds and lakes.

“Mussels play a critical role in maintaining a healthy freshwater ecosystem, yet we know surprising little about how they live,” Miller says.

What is known, Hegeman says, is mussels depend on salmon and other fishes for successful reproduction.

During breeding, she says, female mussels take in sperm released by males into the water. The females release larvae, called “glochidia,” into the water column where they encounter unsuspecting host fish, which carry the developing offspring in their gills for several weeks. At the right stage of maturity, the young mussels release themselves from the host and burrow into sediment as they continue toward adulthood.

“In several places, we found mussels in quite high numbers,” she says. “But just a few watersheds to the north, in the Umatilla River watershed, mussels have been essentially extirpated. This has prompted restoration efforts.”

The findings about areas where mussels are plentiful are significant, Hegeman says, as these habitats are becoming increasingly important resources for understanding mussel ecology and learning about how to restore them to areas where they’ve disappeared.

“Very few people spend as much time underwater as Ericka,” he says. “Her study will be very important for the region’s river restoration efforts, in discovering where mussels live and why.” 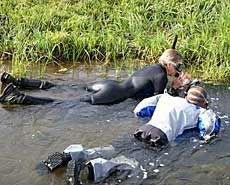 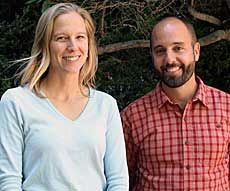 Hegeman, left, was honored for a presentation she delivered at the 2012 Society for Freshwater Science annual meeting. Her talk was based on a paper she authored with Scott Miller, right, and Karen Mock of USU's Department of Wildland Resources.