By: David Sweeny in The Utah Statesman
Issue date: 10/18/06 Section: Campus News
Eventually everyone must decide.
Utah State University had its third annual Major Fair, themed "Think Exploration," Friday [Oct 13] in the Taggart Student Center Sunburst and International Lounge.
Between 1,000 and 2,000 USU students were expected to have attended the event in which every university major was represented, said Becki Broadbent, academic adviser and chair of the fair planning committee. Nearly 500 high school students also attended.
The Major Fair was designed, Broadbent said, to help undeclared students by bringing faculty to them in a "one-stop-shopping" manner. Representatives from campus programs, including Financial Aid, Honors, Housing and Study Abroad were available to answer students' questions. Students were also able to learn about many different minors and certificates.
"You can't graduate undeclared," Broadbent said. But undeclared students have a wonderful opportunity to explore, she said, and the fair served as "an avenue to explore.”
The fair was valuable to both students and advisers because it brought the groups together "on the same day in the same place," Broadbent said.
Nicki Beus, a junior majoring in math education, said the fair was valuable to her because, while she could look on the Internet to find major requirements, the fair gave her a chance to speak directly to people.
Students were asked to fill out evaluation surveys and were entered into a drawing for an iPod Shuffle. Broadbent said the surveys would be used to gauge the effectiveness of the fair. She also pointed to the typical increase in the number of major forms that come through the Registrar's Office after the fair as an indication of the fair's success.
"We've actually found that in October there's an influx of change-of-major forms," Broadbent said.
The fair exposed students to possibilities they hadn't considered and brought attention to some lesser-known majors. Stacey King, a peer adviser from the family and consumer sciences education major, said the fair helped steer students toward the major. "Most people don't know we're in the College of Ag," King said.
Though the fair was geared toward USU freshmen and sophomores, it was open to all USU students and was used as a recruitment tool for high school seniors.
The event coincided with Utah Education Association's fall break and was incorporated into Preview Day so high school students could attend, said Sally Peterson, academic adviser from the College of Humanities, Arts and Social Sciences.
Peterson said the fair was more about USU student retention, however, than high school recruiting. "We want students who start their education here to finish it here," she said.
Utah State has between 2,500 and 3,000 undeclared students, Broadbent said, and the first advice she would offer them is "to learn more about themselves" and discover how their "skills, interests, and abilities relate to the world of work.
Academic Adviser Susie Parkinson said, "Students need to start asking questions instead of assuming their advisers know what the students want," referring to undeclared students who were not at the fair. "We have the resources. Students need to start using them." 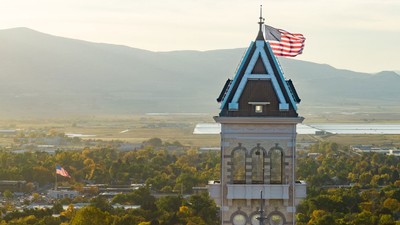