Kerry Jordan, a Utah State University faculty member in the Department of Psychology, and doctoral student Joseph Baker, report that coyotes are capable of reliably discriminating between different quantities of items.

Their findings were published in August 2011 in the journal Behavioural Processes. The research was conducted in conjunction with faculty from USU’s College of Natural Resources.

Working at the USDA National Wildlife Research Center’s Logan Field Station at USU, Jordan and her colleagues tested 16 coyotes in their abilities to choose the larger of two food options.

“As is the case with many other animal species, we found that coyotes are capable of discriminating large versus small quantities of food, so long as the quantities are appropriately distinct. For example, the coyotes only performed near chance expectations (a 50:50 ratio) when their choice was between 3 and 4 food items. However, for choices between 1 and 4 food items, their probability of success rose to near 80 percent,” Jordan said.

“These abilities and error patterns are very similar to those of humans when we are estimating or making rapid quantitative judgments,” Jordan said. “This work is further evidence that comprehension of quantity is not a uniquely human attribute but is, instead, an attribute we likely share with many other species.” 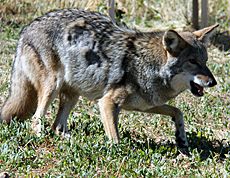 A coyote approaches food at the USDA National Wildlife Research Center's Logan Field Station at USU. Here, researchers observe coyotes in habitats similar to natural ones; coyotes have behavioral repertoires similar to those documented in the wild. 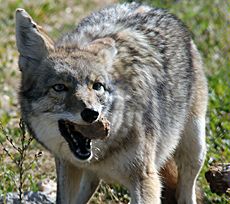 Baker and colleagues identified systematic, rudimentary quantitative skills in coyotes. Here, a coyote in the study has just made a choice between one of two food quantities, and is eating its chosen quantity.