Utah State University physics professor Farrell Edwards, along with the USU team that developed the internationally renowned National Library of Virtual Manipulatives, received the State of Utah’s highest science honor in a Jan. 5 ceremony in Salt Lake City. Gov. Gary R. Herbert and State Science Advisor Tami Goetz presented 2009 Governor’s Science Medals for Science and Technology to Edwards and to NLVM team members Lawrence Cannon and Robert Heal, mathematics professors; education professor James Dorward and instructional technology research scientist Joel Duffin.
Both awards were presented in the science education category of the annual program, which recognizes individuals and groups for outstanding contributions to the advancement of scientific knowledge, education and industry in Utah and beyond.
“I am delighted I’ve been selected as a recipient of a Governor’s Medal for the work I’ve done in the past,” said Edwards, who celebrated his 50th anniversary as a USU faculty member this past year. “I look forward to more years of teaching and contributing to the training of the next generation of scientists and engineers, and developing devices that will impact Utah’s economy for years to come.”
In 1963, a few years after earning his doctorate in low-energy nuclear physics from the California Institute of Technology, Edwards published a modification of Einstein’s “Special Theory of Relativity.” The paper was selected in 2001 as a chapter in 100 Years of Relativity a book commemorating 100 years of Einstein’s theory.
Edwards was instrumental in the formation of USU’s Space Dynamics Laboratory and is contributing to research at USU’s recently established Energy Dynamics Lab. Douglas Lemon, a former student of Edwards and executive vice president and director of laboratories at Utah State University Research Foundation, said Edwards’ current USTAR and U.S Department of Homeland Security-funded research on renewable energy, including investigation of plasma containment and the possible development of a fusion neutron generator, will play a key role in the new lab’s future.
Lemon noted that SDL is full of Edwards’ former students, ranging from seasoned scientists and engineers who took his classes decades ago to current undergraduates.
“His students, past and present, describe him as caring, enthusiastic and a terrific teacher,” Lemon said.
The National Library of Virtual Manipulatives [http://www.mattimath.com/], created by Cannon, Heal, Dorward and Duffin, is a collection of more than 115 interactive, Web-based computer manipulatives and concept tutorials designed to enhance the teaching of mathematics in elementary and secondary schools. Developed with the support of a three-year, $1.2 million grant the team received from the National Science Foundation in 1999, the library is used by students and teachers throughout the world.
“In October 2009, our Web site recorded 828,702 visitors and more than two million page views,” said Dorward, associate dean in the Emma Eccles Jones College of Education and Human Services. “The figures do not take into consideration the numbers of students and teachers who access the applets via our offline and commercial licenses. It is probably fair to say that the library is the most widely used and freely accessible mathematics education software in the world.”
NLVM’s impact is spreading worldwide. The governments of Australia and New Zealand arranged for special library access through their own educational network, which serves some four million students. The USU team collaborated with a Danish publishing company to create a Danish version of NLVM now being marketed throughout Scandinavia. Separate translation efforts have produced versions in French, Spanish and Chinese, and an Arabic version is nearing completion. A multilingual version of NLVM that allows students to easily click between different language versions is available to better serve students who may face a language barrier in public schools.
“The NLVM development team is so much more than the sum of its parts: mathematics, instructional technology, elementary and secondary education,” Heal said. “Individually, we could have achieved only a small fraction of the success of the entire team. We also greatly appreciate the numerous undergraduate and graduate students at USU who made so many significant contributions to the project.”
The two USU medals were among seven presented at this year’s ceremony. More than 35 Aggie faculty members and alumni have received the medal since the award program’s inception in 1987.
Related links:
“‘Fearless Farrell’ at 50 in Physics,” Utah State Today
“Bottled Sun,” Utah State Greats
“Virtual Math Tutor,” Utah State Today
Writers:
Jacoba Poppleton, 435-797-9608, jacoba.mendelkow@usu.edu;
Mary-Ann Muffoletto, 435-797-3517, maryann.muffoletto@usu.edu
Contacts:
Farrell Edwards, 435-797-2855, farrell.edwards@usu.edu;
Robert Heal, 435-797-2853, robert.heal@usu.edu 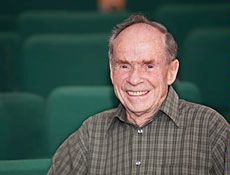 Physics professor Farrell Edwards, who recently celebrated his 50th anniversary as a USU faculty member, is a 2009 recipient of the Governor's Medal for Science and Technology. 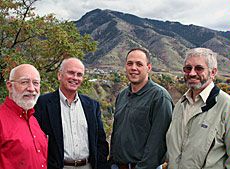 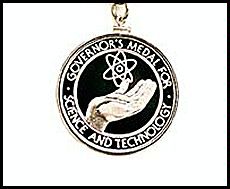