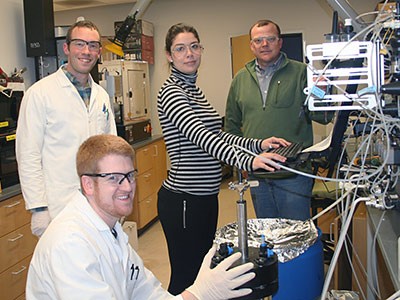 In the lab of USTAR Professor Randy Lewis, USU biologist Justin Jones, right, with team members, from left, Kyle Berg, Richard Decker and Paula Oliveira, report a breakthrough in use of water as a solvent to produce synthetic spider silk.

Synthetic spider silk holds promise as a leading biomaterial of the future with its unrivaled combination of strength and elasticity. Utah State University researchers, guided by USTAR Biology Professor Randy Lewis, have led efforts to create recombinant spider silk proteins through the Lewis Lab’s novel use of transgenic goats, bacteria, alfalfa and silkworms.

But two major challenges to commercial-scale production of affordable, reliable synthetic silk remain. The first involves mastering the means of producing enough of the right stuff — a challenge partially addressed by the Lewis Lab’s success with transgenic bacteria and ability to produce mass quantities with the lab’s newly built USTAR Bioproducts Scale Up Facility on the university’s Innovation Campus.

The second hurdle is the required “solvation” of the synthetic spider silk proteins — that is, the chemical process that enables manufacturers to craft usable forms of the protein, such as fibers, gels, coatings, adhesives and more.

“Until now, this process was thought to require use of expensive, noxious solvents, many of which degraded the strength and elasticity of the spider silk protein,” says Justin Jones, senior research scientist in the Lewis Lab. “This made manufacture of the silk too costly, its consistency unreliable and posed a danger to workers.”

But Jones and colleagues found a solution by going back to the original manufacturer: the spider.

“Spiders spin fibers from an aqueous solution, but initial attempts to replicate this process with synthetic protein were unsuccessful,” says Jones, who completes his doctorate in biology at USU spring 2015. “A spider’s web doesn’t disintegrate in the rain, so this led to the assumption that water couldn’t be used as a solvent. Instead, researchers turned to other organic solvents.”

But Jones wasn’t entirely convinced. He and his colleagues continued to experiment with water as a solvent.

“We found that our aqueous — water — method, that involves generating high pressure and temperature accomplished 100 percent solvation and recovery of the protein,” he says. “To do this, we used a conventional microwave oven.”

Jones admits a number of microwaves were “harmed in the process.”

“We blew holes in about eight ovens before we perfected our method,” he says. “But a microwave is a relatively inexpensive tool to produce a commercially scalable and environmentally friendly way of producing consistently high quality spider silk.”

Further, the new method enabled the researchers to easily generate the silk proteins in a wide variety of materials.

“We’ve produce fibers, gels and coatings,” Jones says. “We also made surprisingly absorbent sponges, adhesives that grip both wood and plastics, as well as transparent films you can read through.”

With such versatility, Jones and Lewis envision multiple applications.

“Spider silk is biocompatible, isn’t rejected by the human body and can be treated with antibacterial compounds for use as a coating for surgical steel instruments, implants and catheters,” Lewis says. “With its strength and elasticity, it also holds great promise for use as artificial tendons, ligaments, skin and bone.”

Lewis’ research is also featured in a March 25, 2015, summary Outlook article in the journal Nature. 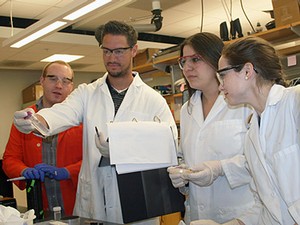 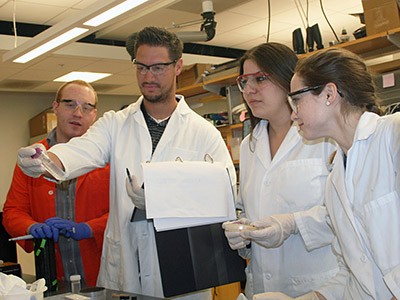