Old Lyric Repertory Company in the Caine School of the Arts at Utah State University opens its third show with Oscar Wilde’s trival comedy for serious people, The Importance of being Earnest. The production opens Thursday, July 2, with a 7:30 p.m. curtain time. Performances continue July 3 at 7:30 p.m. and July 4 with a matinee performance only at 2 p.m.
Other OLRC shows in rolling repertory this season are The Foreigner, You're a Good Man, Charlie Brown and the yet to open, An Inspector Calls. Performances are June 11-Aug. 1 in the historic Caine Lyric Theatre (28 West Center Street, Logan).
Tickets range from $19-$25 and senior/youth/USU faculty and staff discounts are available by calling the Caine School of the Arts Box Office at 435-797-8022 or 435-752-1500, visiting the box office online or at the door.
The Importance of Being Earnest is directed by USU Theatre Arts Department faculty member Lynda Linford and stars W. Lee Daily as Lady Bracknell. Other actors include Phillip Lowe as Algernon, Casey Allen as Jack, Fred Willecke as Rev. Canon Chasuble, Aubrey Campbell as Cecily and Felicia Stehmeier as Gwendolen. Willecke appears courtesy of the Actors’ Equity Association, the Union of Professional Actors and Stage Managers in the United States.
Wilde’s final and perhaps most recognized play, “Earnest,” is by all accounts, a masterpiece of modern comedy. A century after it was written, it strikes a wonderful balance by remaining both a respected and studied piece of literature, as well as a favorite with audiences.
“Earnest” tells a tale of Jack Worthing and Algernon Moncrieff. Both young men have taken to bending the recipe for truth in order to add a dash of excitement to their lives. Jack invents an imaginary brother, Ernest, whom he uses as an excuse to escape from his dull home in the country to frolic in town. Algernon uses the same technique, only in reverse; his imaginary friend, Bunbury, provides a convenient and frequent method of taking adventures in the country. Their deceptions eventually cross paths, resulting in a series of crises that threaten to spoil their romantic pursuits: Jack of his love Gwendolyn Fairfax, and Algernon of his belle Cecily Cardew.
Following its opening, The Importance of Being Earnest joins the rotating OLRC calendar with performances July 15, 17, 23, 25 (evening and matinee) and 28. The next, and final production to open, is An Inspector Calls, with a July 9 opening night.
The Old Lyric Repertory Company is an advanced program in the Department of Theatre Arts and the Caine School of the Arts at Utah State University, as well as the College of Humanities, Arts and Social Sciences.
For information on the OLRC, including group ticket sales, call Public Relations and Marketing Director Sally Okelberry, (435) 797-1500, or email sally.okelberry@usu.edu.
Related links: 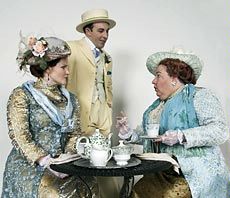 The Old Lyric Repertory Company's production of "The Importance of Being Earnest" opens at the Caine Lyric Theatre July 2. (left to right) Felicia Stehmeier as Gwendolyn Fairfax, Phillip Lowe as Algernon and W. Lee Daily as Lady Bracknell.