Utah State University political science students will find out Nov. 6 if their forecasts for the 2002 U.S. congressional and gubernatorial elections are as accurate as they are confident in their predictions.
Political science students confidently predicted the outcome of 32 of the most competitive political races in the United States, whose outcome will determine the majority in the House of Representatives and United States Senate next week.
Professor Michael Lyons created this project for students in his "Political Science Research Methods" class (Poli Sci 3000) to encourage them to make educated predictions based on careful research and political intuition.
"This election has been the most analyzed congressional race in history," said Lyons. "It is exceedingly difficult to forecast this year’s election results where there are so many factors that will affect voter decisions. I suspect the student’s predictions are as accurate as any other analysts could be in a year like this."
Students, in their research, discovered that Democratic or Republican control of the U.S. Senate could hinge on the election in Minnesota, where incumbent Democrat Paul Wellstone died in an airplane crash Friday, Oct. 25. Otherwise, the Democrats appear likely to control 50 Senate seats after the election, with the Republicans controlling 49, the students predictions show. Several Senate races are, however, excruciatingly close and are still described as "too close to call" by analysts, including congressional election expert Charlie Cook.
In addition to Minnesota, Senate races warranting particularly close attention include South Dakota, where Democratic Senator Tim Johnson faces Republican Rep. Tom Thune; Colorado, where Republican Senator Wayne Allard could lose his seat to Democrat Tom Strickland; and New Hampshire where Democratic Gov. Jeanne Shaheen and Republican Rep. John E. Sununu appear to be locked in a dead heat.
If class predictions for the other 30 Senate races hold up, Republican victories in three of these four contests would result in a 50-50 partisan division of the Senate, handing the Republicans control by virtue of Vice President Cheney’s tie breaking vote. Currently, the students give the nod to Thune, Strickland and Sununu, leaving Minnesota as the state to decide the majority.
These conclusions were drawn from independent research conducted by each student. Students in Lyons’ class began their research by evaluating the political history and demographic composition of their assigned districts or states. They then assessed personal strengths and weaknesses of the candidates; their finances, their campaign strategies and their use of television. Their assignment involved 8-10 pages of writing plus the compilation of an extensive appendix of newspaper articles and source materials. Students familiarize themselves with the use of political science research sources and organized the information into cogent political analysis.
Student Jamie Nelson has been studying Minnesota and the political race surrounding the Senate between Republican Norm Coleman and Democrat Paul Wellstone. Many feel this race will most likely determine whether Democrats or Republicans will have the majority in the Senate, which will affect how the U.S. government will function over the next two years.
Nelson explains that Coleman was St. Paul’s mayor, and Wellstone has been the Senator for Minnesota for the past 12 years, up until his recent death.
"Before his tragic death in a plane crash, Wellstone had gained a slight lead in the polls that have been neck and neck," said Nelson. "My personal opinion is that the Democratic party will run Walter Mondale in his place. Historically sympathy votes have given dead candidates and their parties significant leads. Missouri’s Carnahan was also very close in the polls to his competitor in 2000. When he died in a plane crash a few days before the election, his support base expanded significantly, and he was, although dead, still elected in 2000."
After voicing her prediction of Mondale’s appointment, Nelson was proven correct Oct. 31, when former Vice President Walter Mondale accepted the Minnesota Democratic Party’s nomination. So far Nelson has been right on the money with her predictions and, if she is correct, Mondale will win his electoral race. This prediction echoes Lyons’ statement that "dead congressional candidates seldom lose."
Nelson is not alone in her predictions. Other students see daily polls that coincide with their predictions.

"I have excellent students in my class," said Lyons. " “They have demonstrated enthusiasm that has both surprised me and inspired me ."
Lyons and his students have made tentative plans to throw a pizza party the night of elections so that they can compare their predictions to actual results. They all have a feeling they will be right on.
Writer: Mykel France, (435) 797-1351
Contact: Public Relations & Marketing, (435) 797-1351 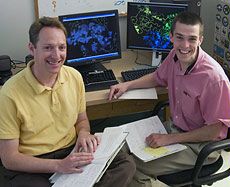