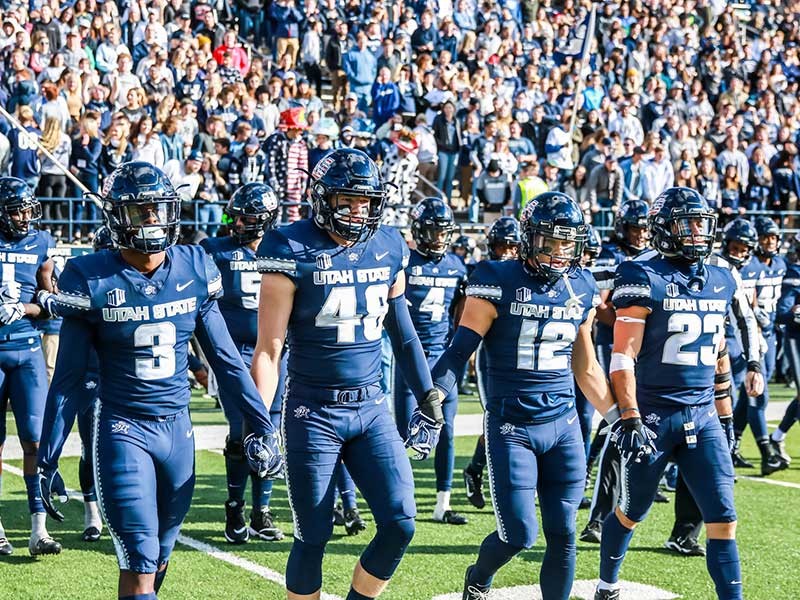 Utah State is ranked 23rd in the third College Football Playoff (CFP) Rankings of the 2018 season, it was announced Tuesday night on ESPN. It is USU's first-ever appearance in the CFP poll.

Utah State is one of two teams from the Mountain West in the CFP poll this week, along with Boise State at No. 25, and is the second-highest ranked team from the Group of Five, trailing UCF at No. 11.

Utah State is also currently ranked 14th in The Associated Press poll with 689 votes and 13th in the Coaches poll with 698 votes.

Utah State's 9-1 start to the season is the tied for the second-best in school history, trailing only Merlin Olsen's 1961 team that started its year with a 9-0-1 record and finished with a 9-1-1 mark. No Aggie team has won 10 of its first 11 games, something USU can accomplish this weekend with a win at Colorado State. USU is also 6-0 in Mountain West play for the first time in its six years in the league and with a win this weekend will tie the 2014 team for the most conference wins in school history.

Utah State's current nine-game winning streak is tied with the 1960 team for the best in school history and is tied for the fifth-longest active streak in the nation.

On the season, Utah State is one of just 14 teams in the nation with one or fewer losses, and one of nine teams that has not lost a conference game.

Utah State ranks among the top 10 teams in the nation in 16 different statistical categories and leads the nation in six of those categories, including scoring offense (51.3 points per game), scoring drives under one minute (23), kickoff returns (29.83 yards per return), turnovers forced (26), defensive three-and-outs forced (6.0 per game) and non-offensive touchdowns (8).

Utah State continues Mountain West play this weekend with a road game at Colorado State on Saturday, Nov. 17, at noon (MT). The game will be televised regionally on AT&T Sports Net (Comcast Ch. 52, DISH Ch. 414, DirecTV Ch. 683). Overall, USU has won eight of its last nine Mountain West games dating back to last season and five of its last six on the road.

The Mountain West Championship game, which pits the two divisional winners against each other, will be played on Dec. 1 at 5:45 p.m. MT. The host site will be determined by the divisional champion with the highest winning percentage (conference games only).

How to Follow the CFP Rankings
The College Football Playoff selection committee will continue to reveal its weekly rankings, each Tuesday, with each episode beginning at 4 p.m. PT from the network's Bristol, Conn., studios, except the Nov. 6 episode which will be live from Bankers Life Fieldhouse, at approximately 6 p.m. PT, in between games of the State Farm Champions Classic. The third (Nov. 13) and fourth (Nov. 20) weekly reveals will be an hour, with the second (Nov. 6) and fifth (Nov. 27) shows being a half-hour. The College Football Playoff selection committee weekly rankings will build momentum toward Sunday, Dec. 2, when the committee will reveal its final rankings, College Football Playoff matchups and the New Year's Six participants. ESPN will have complete coverage of the sport's Selection Day, including the exclusive announcement beginning at 9 a.m. PT.