As you read this, Todd Crowl could be sipping maté cocido in Argentina’s Patagonia with Victor Hugo Wright-Igoleft as the two discuss a vanishing lake. Or he could be investigating spatial and temporal patterns of coexisting species in Puerto Rico’s Luquillo Mountains. Perhaps Crowl and mate Hardley Worthit are polishing off vegemite sandwiches while catching a rugby match in Australia. Then again, he might be dashing through Auckland International Airport or strolling across Notre Dame’s DeBartolo Quad or observing highway construction in southern China.

Like the fictional, globe-trotting Carmen Sandiego and her ridiculously monikered accomplices, it’s hard to keep up with Crowl. The Utah State University quantitative ecologist has carved out a unique career of international research and teaching that shuttles him between continents year round.
“I’m not bothered by jet lag,” says Crowl, a professor in USU’s Department of Watershed Sciences. “I travel light and get a lot of work done on airplanes.”
His current whereabouts? Crowl is at Harvard University, where he is a recipient of a Charles Bullard Fellowship in Forest Research. The prestigious award includes a $30,000 honorarium. The focus of his six-month fellowship is working with a group of collaborators to examine the impact of hurricanes on forests – a project that involves simulation of hurricane force winds.
How do you do that?
“With a Huey helicopter – or a bulldozer,” Crowl says.
Since 1988, Crowl has served as a principle investigator for National Science Foundation-funded research at the Luquillo Experimental Forest Long-Term Ecological Research site in eastern Puerto Rico. Since joining USU’s faculty in 1990, his fall semesters – with the exception of this year – are spent teaching ecology in Logan. During winter, Crowl heads south to conduct research at Luquillo.
“A central goal of our studies is to understand the long-term dynamics of tropical forest ecosystems,” he says. “We’re monitoring large-scale, infrequent disturbance, rapid processing of organic material, along with high habitat and species diversity.”
With his colleagues in Cambridge, Crowl is exploring ways to analyze and synthesize large experimental data sets – a key challenge of long-term ecological studies, which yield overwhelmingly huge amounts of information. During his fellowship, Crowl is also hosting short analysis and writing sessions with Puerto Rican colleagues and completing the manuscript of a book on tropical rainforest ecology.
“Among the things we’re looking at are comparing the impact of hurricanes on forests in the northeastern U.S. with tropical forests in the Caribbean,” he says. “We’re developing algorithms to deal with the disparate data sets.”
And if that isn’t enough to keep him busy, Crowl also collaborates on an NSF-funded, multi-institution biocomplexity project aimed at modeling overlapping river and road networks and is pursuing research involving modeling of the long-term ecological impacts of China’s massive Kunming-Bangkok Highway project, along other projects in Argentina and New Zealand.
Oh, and during summers, Crowl serves as an adjunct professor at the University of Notre Dame. This past summer, he managed to squeeze in a presentation at an academic conference in Australia as well.
Crowl’s research focus involves investigation of multiple factors that impact ecosystems.
“Everybody talks about climate change. I prefer to talk about global change,” Crowl says. “Climate change is driven by long-term forces. To really understand what’s happening on a global scale, you have to do large-scale studies over long periods of time.”
In contrast, he says, changes in species diversity in response to natural and human-driven impacts occur almost instantly.
“For example, when an exotic species is introduced to a new place – whether intentionally or unintentionally – the impact is immediate,” Crowl says.
“Looking at species on different continents, you can see that humans are homogenizing the species pool by bringing species of animals and plants from their homelands to new destinations,” Crowl says. “My colleagues and I are investigating the ramifications of these practices.”
One of the great challenges of ecology, he says, is determining why some species are successful and why others fail.
“To tackle this challenge, you have to conduct research from a global perspective,” Crowl says. “And collaborate with scientists with expertise in a wide variety of disciplines.”
Related Links
USU Department of Watershed Sciences
Luquillo Experimental Forest
NSF Biocomplexity Project
USU Ecology Center
USU College of Natural Resources
Contact: Todd Crowl
Writer: Mary-AnnMuffoletto, 435-797-1429 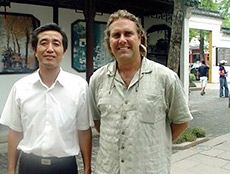 Professor Todd Crowl's teaching and research schedule takes him around the globe throughout the year. Crowl, right, meets with a government official in southern China to discuss the ecological impacts of the massive Kunming-Bangkok Highway project. 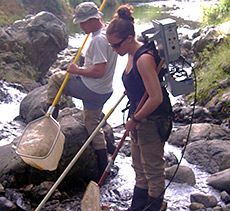