The Old Lyric Repertory Company, part of the Caine College of the Arts at Utah State University, presents The Musical of Musicals, The Musical! opening June 25 at the historic Caine Lyric Theatre in downtown Logan.

Written by Eric Rockwell and Joanne Bogart, The Musical of Musicals, The Musical! borrows from some of Broadway’s most notable productions to make one standing ovation to musical theater.

“Musical is a very clever show,” said Jim Christian, director, musical director and choreographer for the show. “You take one of the most simple plots in the world and retell it five times with a nod to some of the most popular productions to ever be performed.”

“This show is fun, fast-paced, light and refreshing,” said Christian. “Each performer has to be a chameleon, and all the roles are like a big game played with the audience.”

Cast members Tyson Baker, W. Lee Daily, Lacy J. Dunn, Jonathan McBride, Emilie Starr and Camille Van Wagoner journey through variations on characters beginning with Corn!, a Rodgers and Hammerstein roundup that takes its notes from Oklahoma!, The King and I and The Sound of Music. Next the cast changes into ‘70s-style street clothes for A Little Complex, a Stephen Sondheim mashup that parodies Into the Woods, Sweeney Todd and A Funny Thing Happened on the Way to the Forum, to name a few. Next, Dear Abby parodies Jerry Herman’s Hello Dolly and Mame.

The Musical of Musicals, The Musical!  is a comic valentine to musical theater and was the longest running show in the York Theatre Company’s 35-year history before moving to Off-Broadway.

“If you know musical theater, this show will be incredible for you,” said Christian. “If you don’t, it will still be a blast with humor that works on every level.”

The second act takes on the style of Andrew Lloyd Weber in the Aspects of Juanita, reminiscent of Phantom of the Opera, Jesus Christ Superstar and Cats. In the fifth and final musical, Speakeasy, the work of John Kander and Fred Ebb’s Chicago and Cabaret close out the show with a kick.

“Musical is poking fun at iconic musical theater,” said Dennis Hassan, co-artistic director of the Lyric Rep. “We have a strong cast who are adapting to five different styles of singing and dancing.”

Opening June 25 and continuing June 26 and 27, The Musical of Musicals, The Musical! will then run on select dates through July 29.

The Lyric Rep’s 2014 season also includes A Funny Thing Happened on the Way to the Forum, Tons of Money and The Elephant Man.

For more information and tickets, visit the CCA Box Office located in room 139-B of the Chase Fine Arts Center on USU’s Logan campus, call 435-797-8022 or see the Caine College’s Production Services website. The box office is open from 9 a.m.-noon Monday through Friday. Tickets may also be purchased at the Caine Lyric Theatre in downtown Logan at 28 West Center Monday through Friday 1-4 p.m. and one hour prior to curtain on show nights. 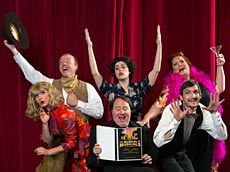