By Dr. Courtney Flint and Team

Ephraim City is one of 33 cities participating in the Utah Wellbeing Survey Project in 2022. This project is designed to assess the wellbeing and local perspectives of city residents and to provide information to city leaders to inform their general planning process.

We are grateful to all participants who took the survey and to our city partners who helped to make this possible. Additionally, we are grateful to the Utah League of Cities and Towns and USU Extension for their financial support.

What is in this report?

This report describes findings from the 2022 Ephraim survey and some comparative information with other project cities. Feedback from city leaders, planners, and residents is welcome.

How was the survey conducted?

Starting in March of 2022, Ephraim City advertised the survey via social media, at City Hall, email lists, the city website, and print and electronic newsletters. All city residents age 18+ were encouraged to take the online Qualtrics survey.

How many people responded?

Overall Personal Wellbeing in Ephraim was below average among the 33 study communities, whereas Community Wellbeing was above average.

Top concerns for the future of Ephraim were:

What do people value most about Ephraim?
Positive social climate with small-town feel, good environmental quality, and a peaceful and quiet place to live.

Demographic characteristics of the survey respondents are compared below with U.S. Census information from the 2016-2020 American Community Survey. As the table shows, 2022 survey respondents were not fully representative of Ephraim. People with at least a 4-year college degree, those who are married, age 30-39 and 60-69, own their home, have children under 18 in household, and those with incomes between $50,000 and $74,999 were particularly overrepresented. People age 18-29 and those with incomes under $25,000 were particularly underrepresented. Not all respondents provided demographic information. Weighting was not used in any of the analysis for the findings presented below. 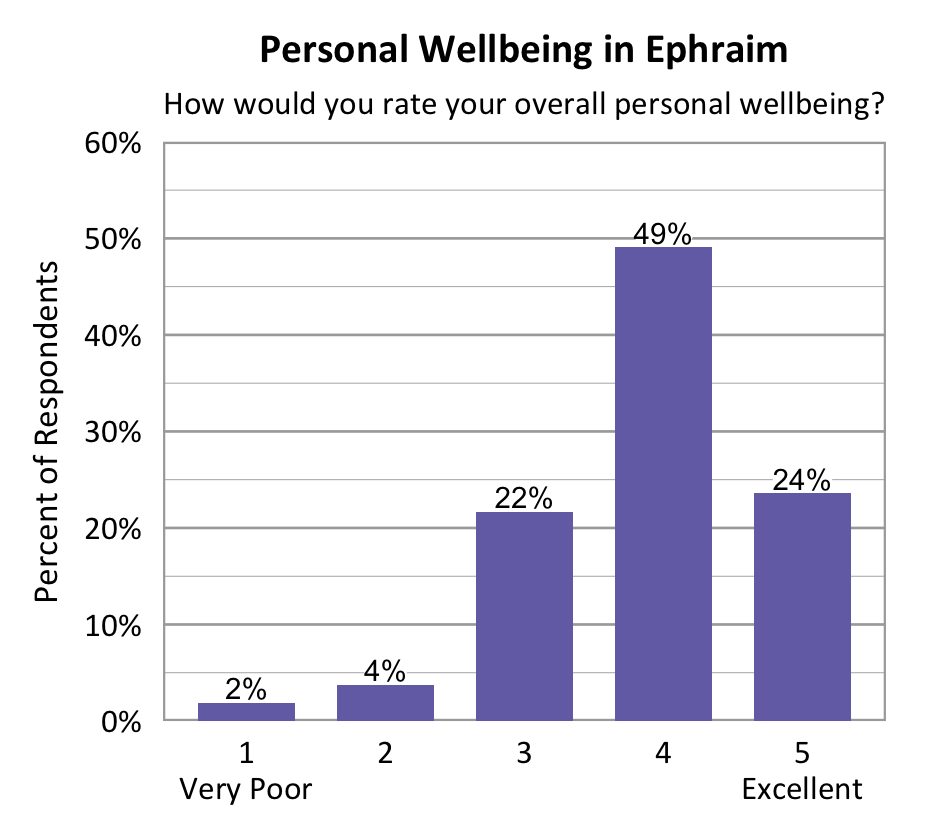 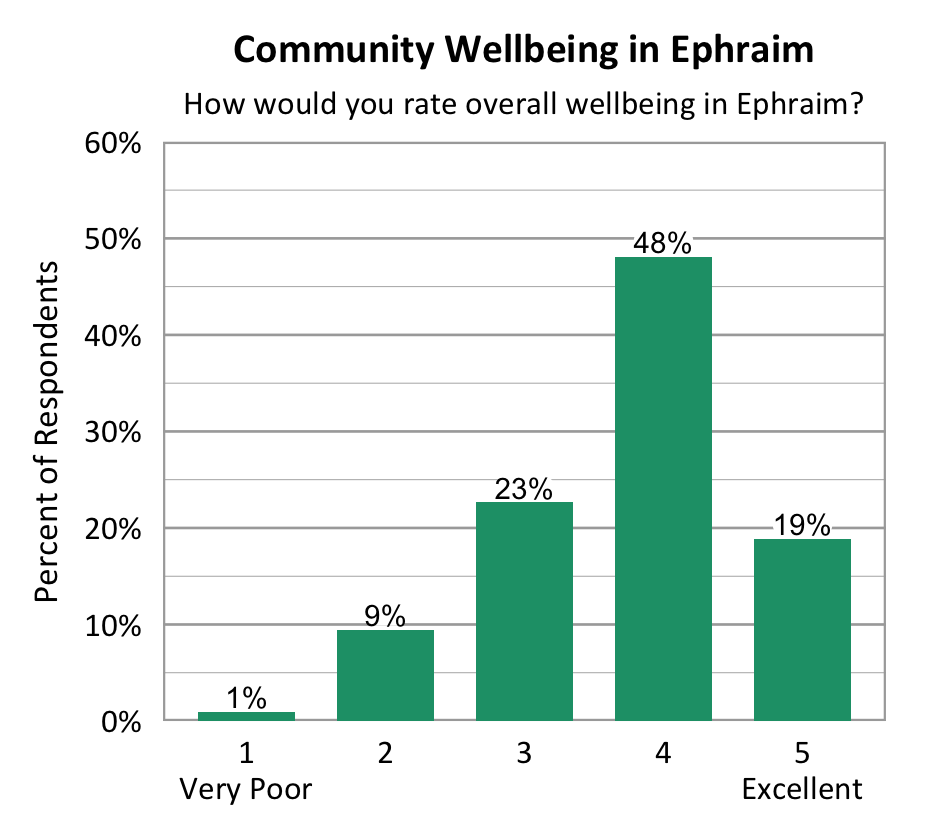 Comparing survey data from Ephraim over the years as shown in the information below, we can see that both the average personal wellbeing score and the community wellbeing score increased. Note that the number of respondents differed between years and there is no tracking of individuals from one year to the next. 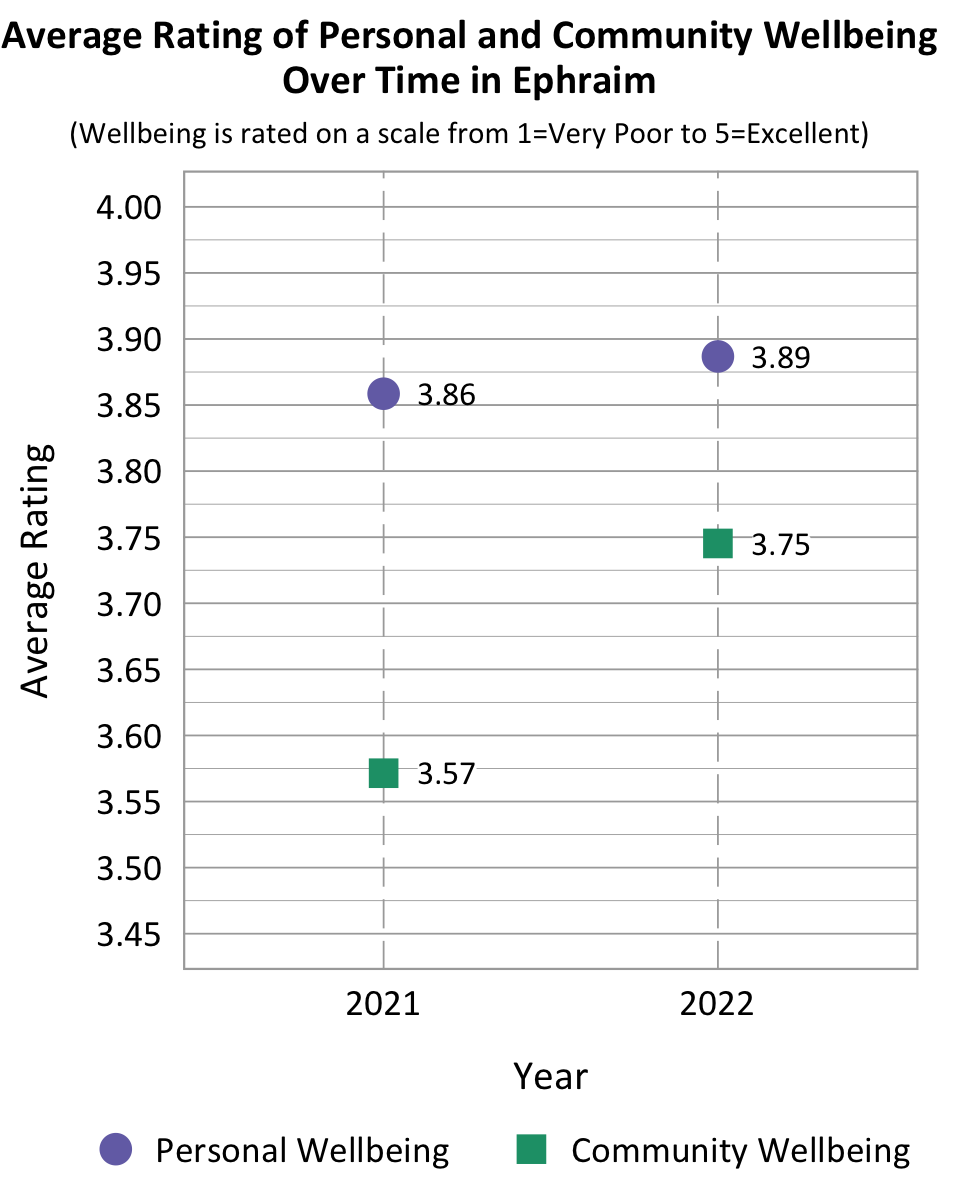 The Utah League of Cities and Towns classifies Ephraim as a Rural Hub/Resort Community (and we have combined these with the Traditional Rural Communities). Some cities may fit within more than one cluster. Note that in the 2021 reports, Ephraim was placed in the Rapid Growth cluster.

Within the Rural city cluster, Ephraim fell below the cluster average in terms of the average overall personal wellbeing score and above average in terms of the community wellbeing score. Ephraim was only statistically significantly higher than Moab in terms of overall personal wellbeing. In terms of overall community wellbeing, Ephraim was significantly higher than Moab, East Carbon, Price, and Tremonton. Margins of error are particularly high for Delta, Helper, Midvale, and Santaquin due to low survey response.

According to national and international entities that track wellbeing, there are a number of common dimensions or domains of wellbeing. In this survey, respondents rated ten domains on a 5-point scale from poor to excellent, suggesting how their wellbeing was doing in each area. They were also asked to indicate the importance of each domain to their overall personal wellbeing on a 5-point scale from not at all important to very important. The top four highest rated wellbeing domains for respondents in Ephraim were Safety and Security (76%), Local Environmental Quality (74%), Education (71%), and Connection with Nature (70%). The four most important wellbeing domains were Mental Health (97%), Safety and Security (96%), Physical Health (94%), and Living Standards (89%). 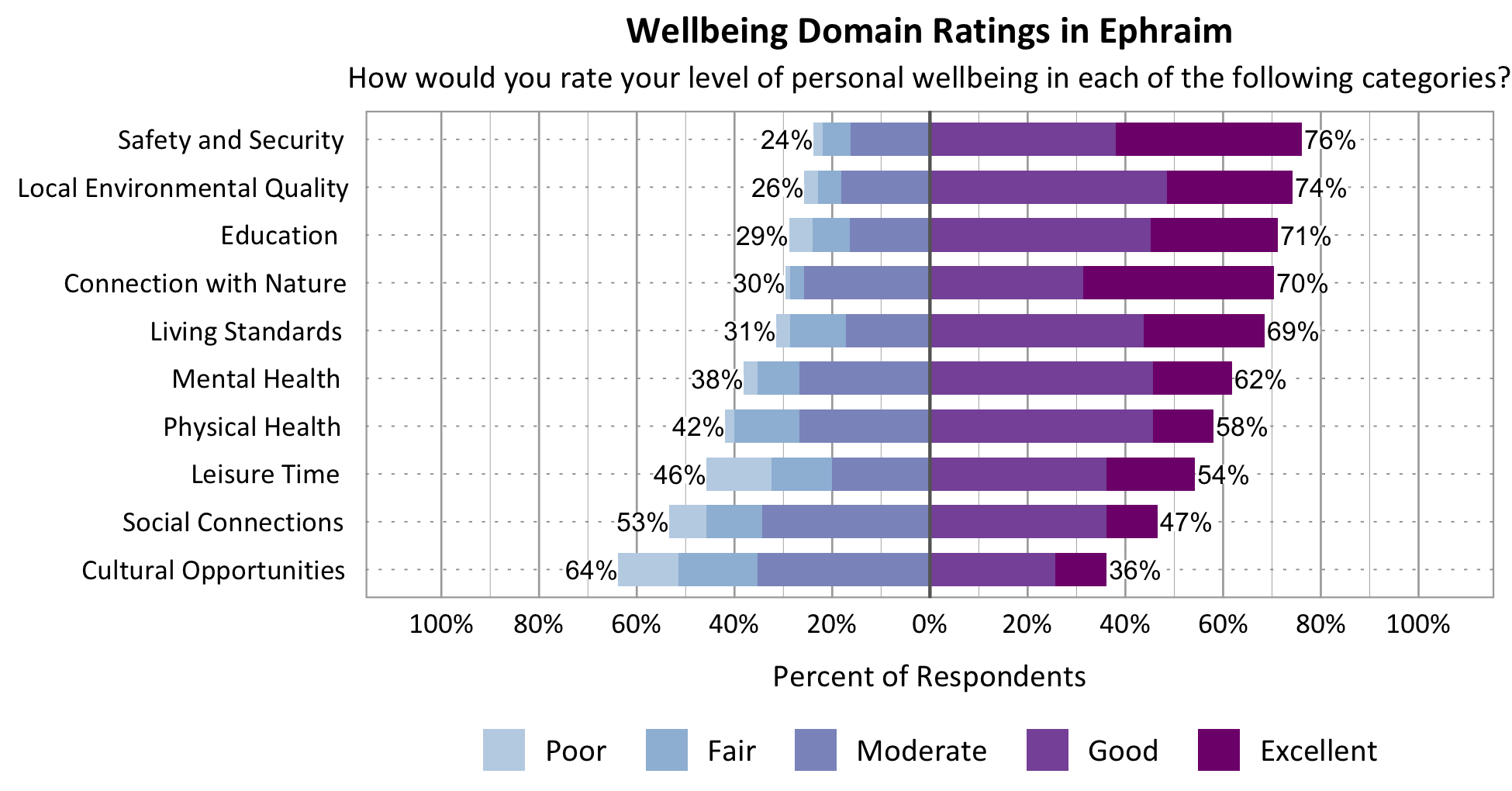 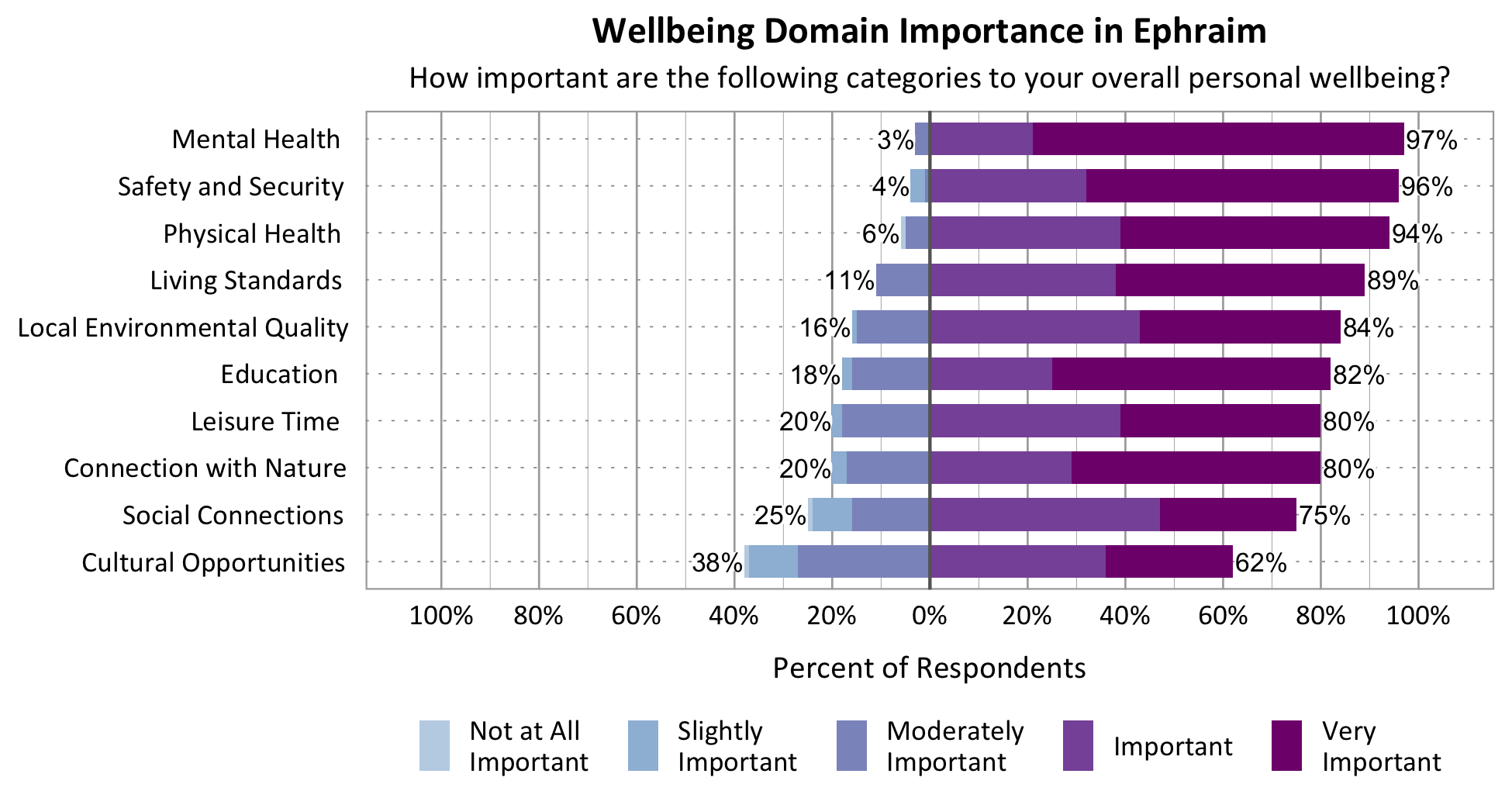 The graph below illustrates the relationship between the average rating and the average importance of wellbeing domains for survey respondents from Ephraim. Safety and Security, Living Standards, and Education were highly important and rated above average among the domains. Physical Health and Mental Health fell in the “red zone” of higher importance, but lower ratings. 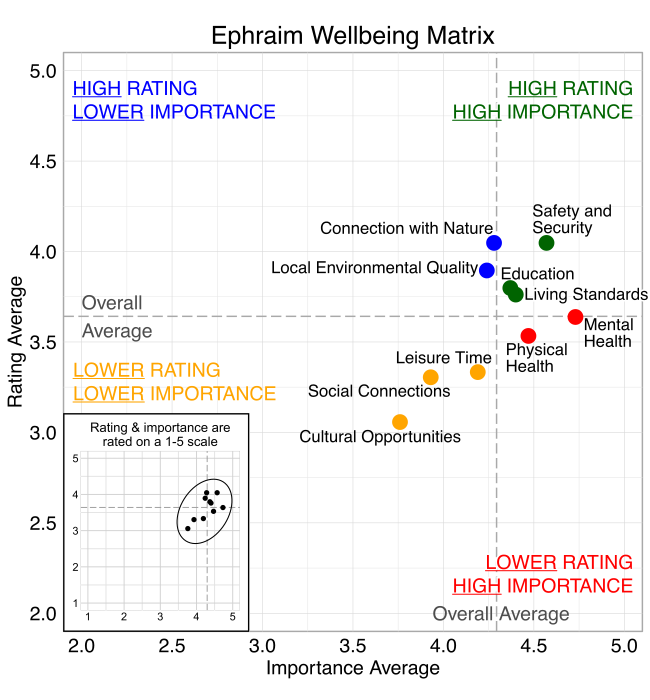 Wellbeing Domains Over Time in Ephraim

The graphs below show how the domains were rated over the years by Ephraim residents. The number of respondents changed over time. 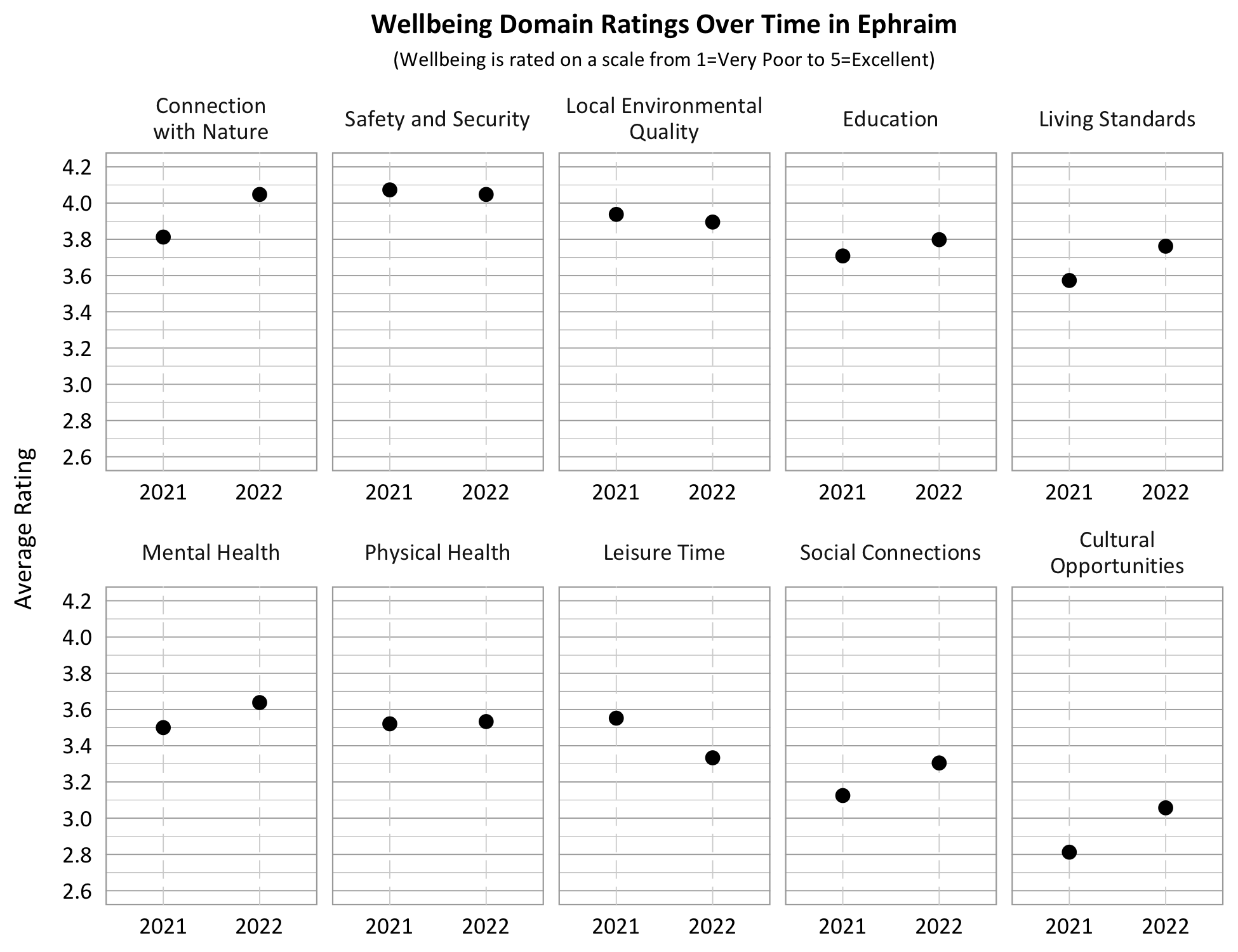 How are Demographic Characteristics Related to Wellbeing?

The demographic variables for age, gender, college degree, religion, income, and length of residence were found to have varying relationships among Ephraim respondents as shown in the table below based on a generalized linear model with unweighted data. The +/- sign indicates whether the wellbeing score in the specific demographic group was significantly higher or lower than the reference group in each demographic variable (p<.05).

Table 3
Relationship Between Demographic Characteristics and Wellbeing Domains in Ephraim

Community Action and Connection in Ephraim 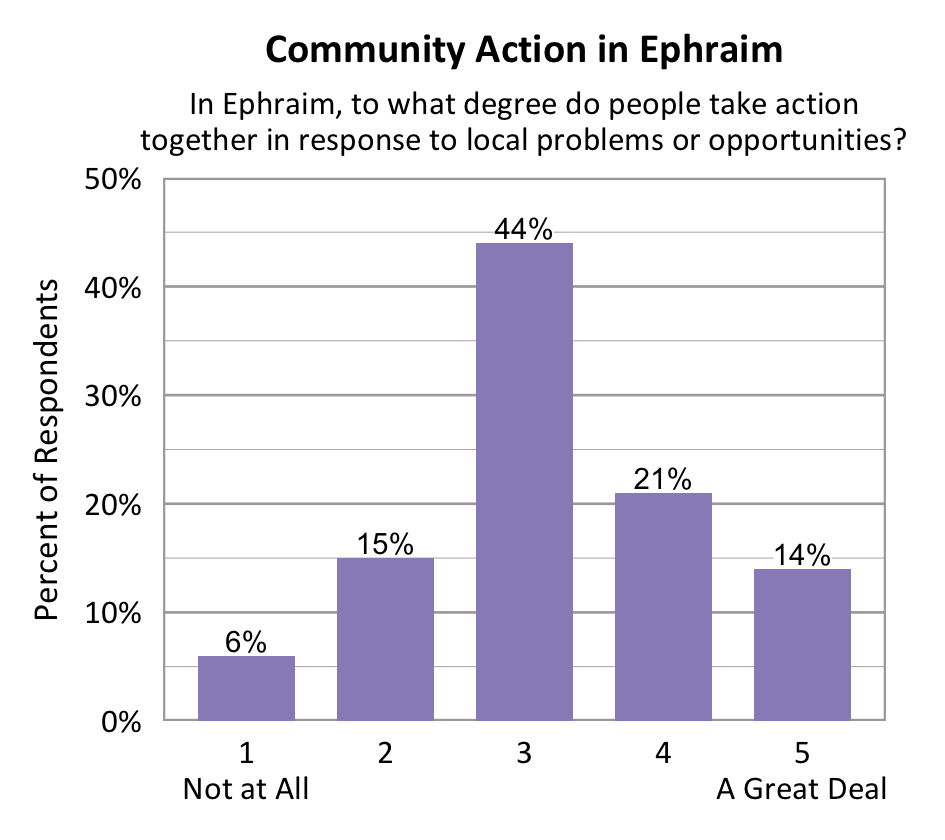 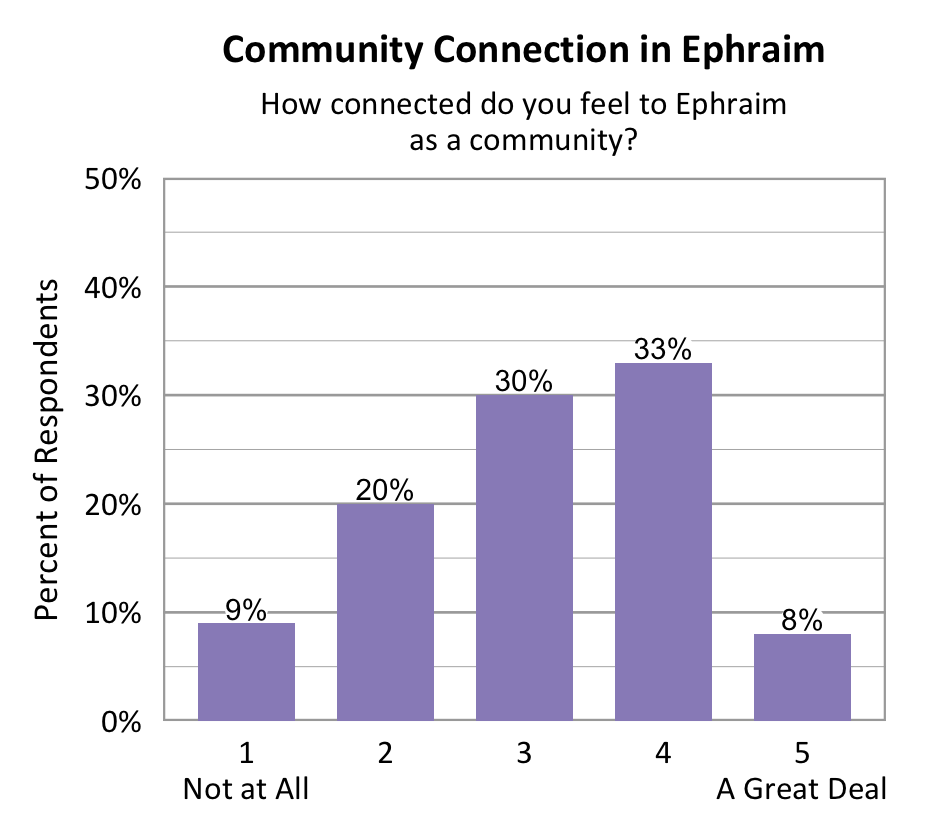 The graphs below show how Wellbeing Project cities compare on the degree to which people take action in response to local problems and opportunities and how connected people feel to their city as a community. Ephraim was in the lower half on perceived community action and the upper half on community connection based on the number of people indicating a 4 or 5 on a 5-point scale. Margins of error are particularly high for Delta, Helper, Midvale, and Santaquin due to low survey response. 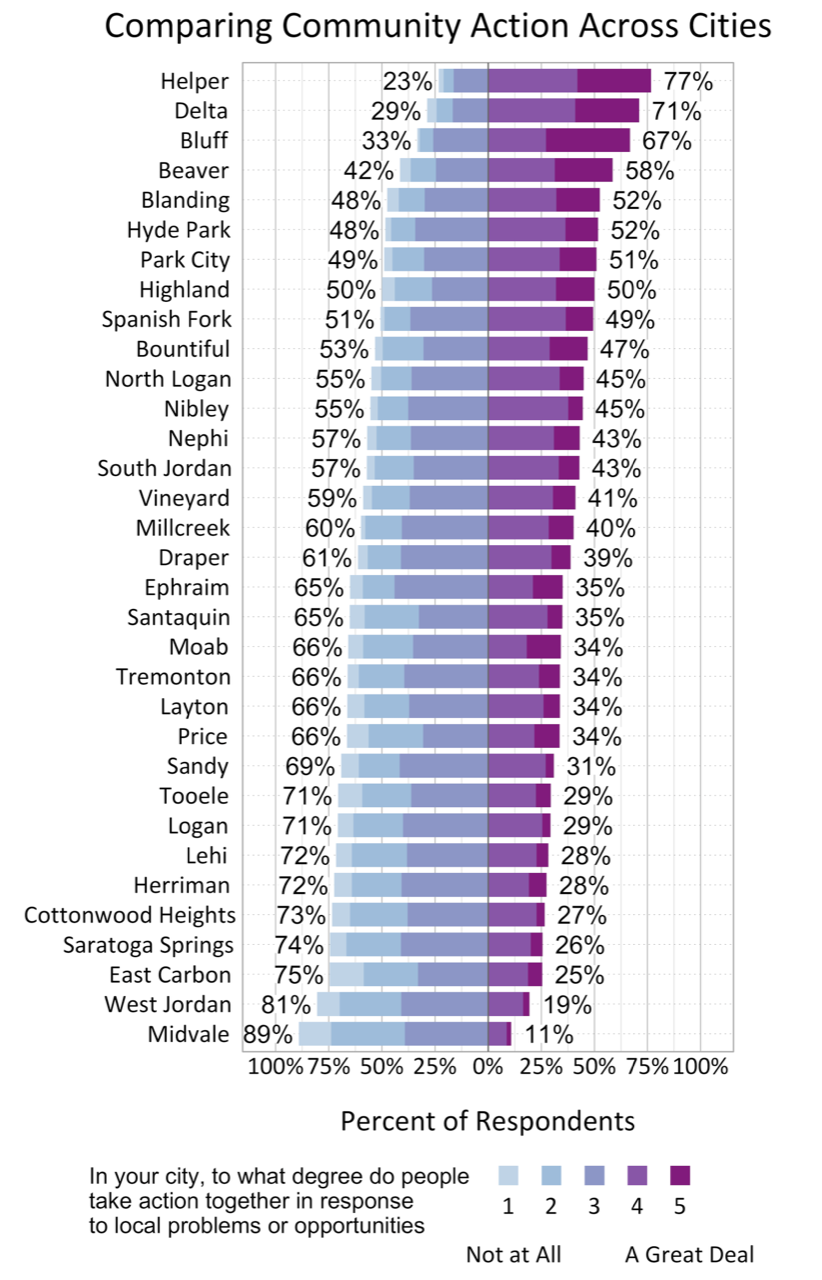 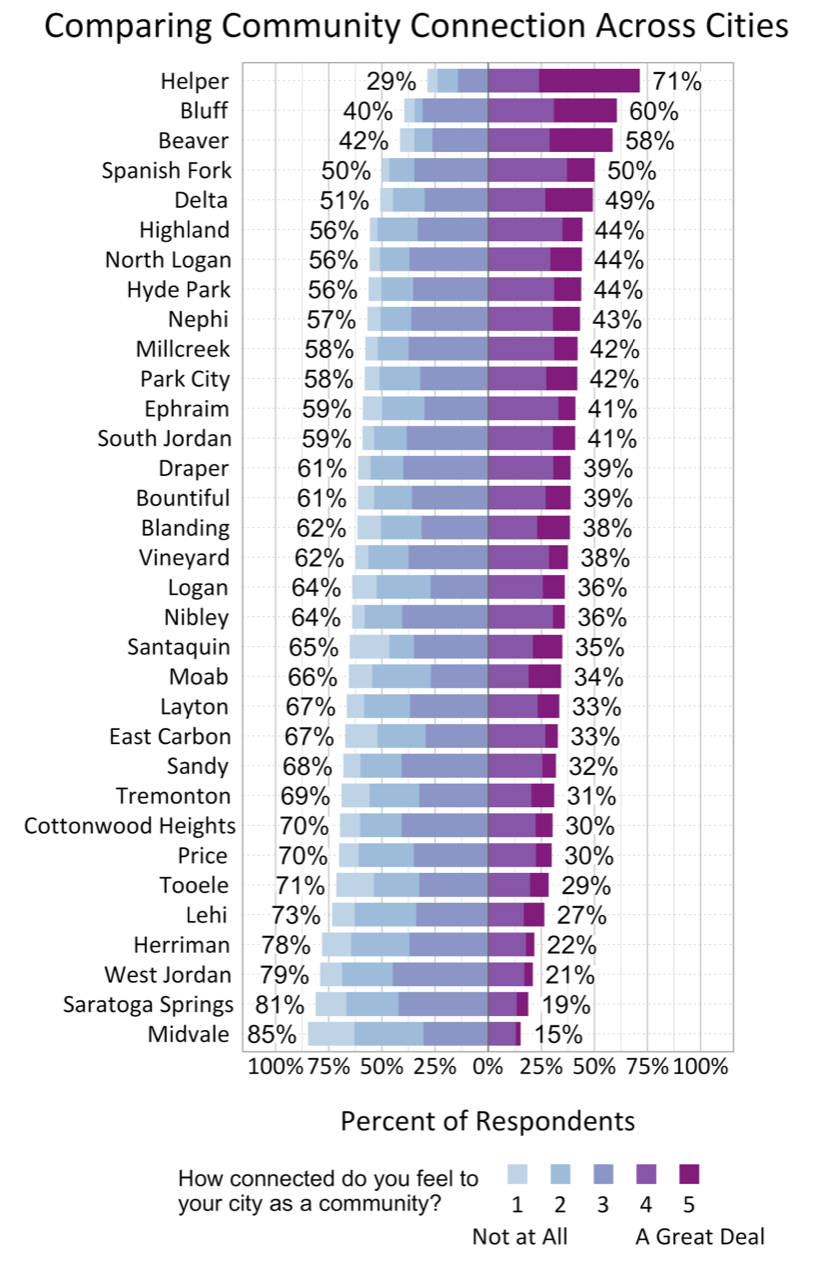 Participation in Recreation and Nature-Related Activities

Respondents were asked to indicate whether or not they participated in eight different recreation or nature-based activities in the past 12 months. Enjoying wildlife and birds in your yard or neighborhood (84%) was the most common activity for respondents, followed by non-motorized recreation on public lands or waters (77%) and gardening (74%). 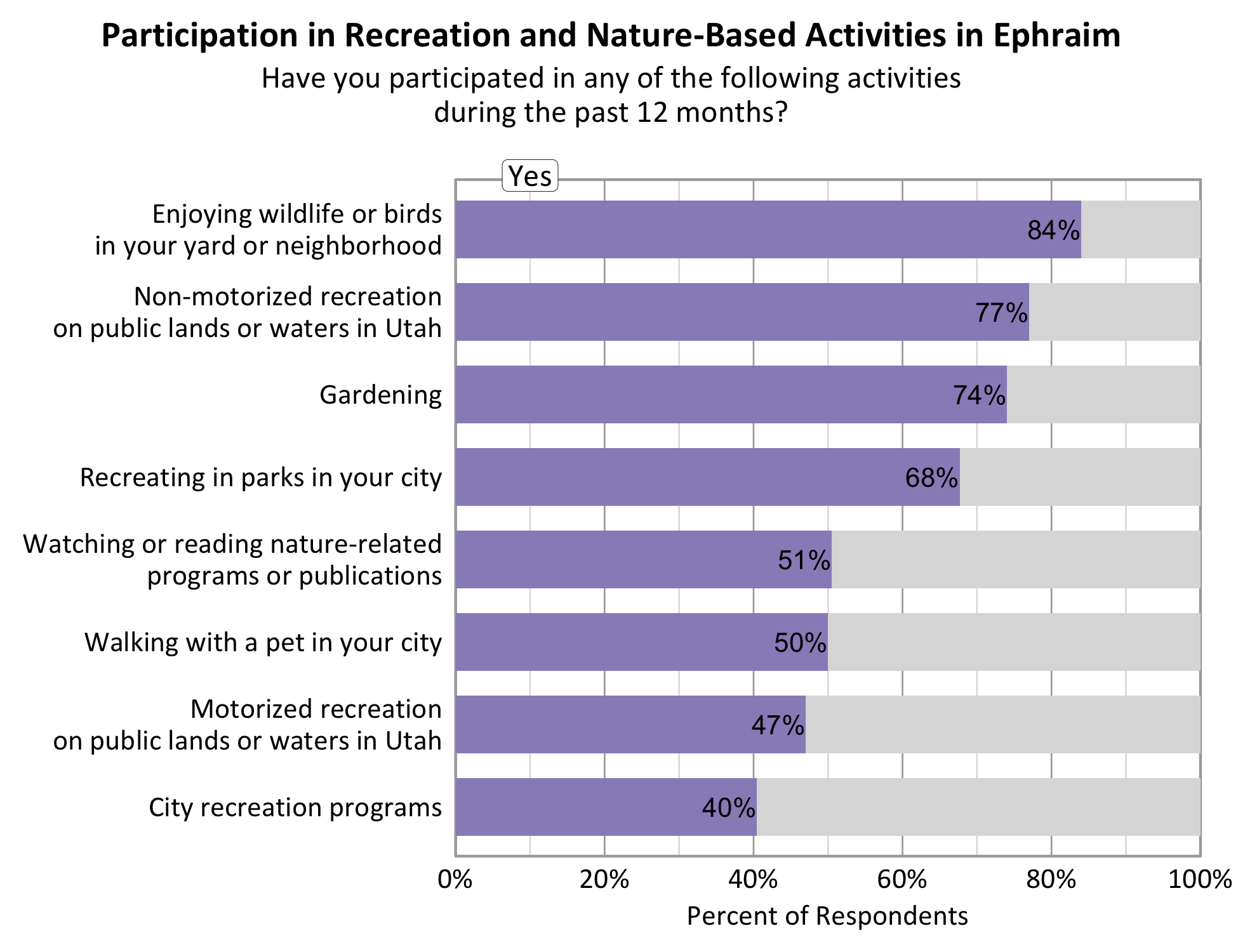 For Ephraim respondents, none of the above activities were significantly related to overall personal wellbeing or community wellbeing.

Recreating in city parks and gardening were positively and significantly related to community connections.

Survey participants were asked about the influence of landscape features on their wellbeing. Natural landscapes including mountains, rivers and streams, lakes, and city parks were found to have an overwhelmingly positive influence on wellbeing. In terms of development and industry in the landscape, respondents were more divided. 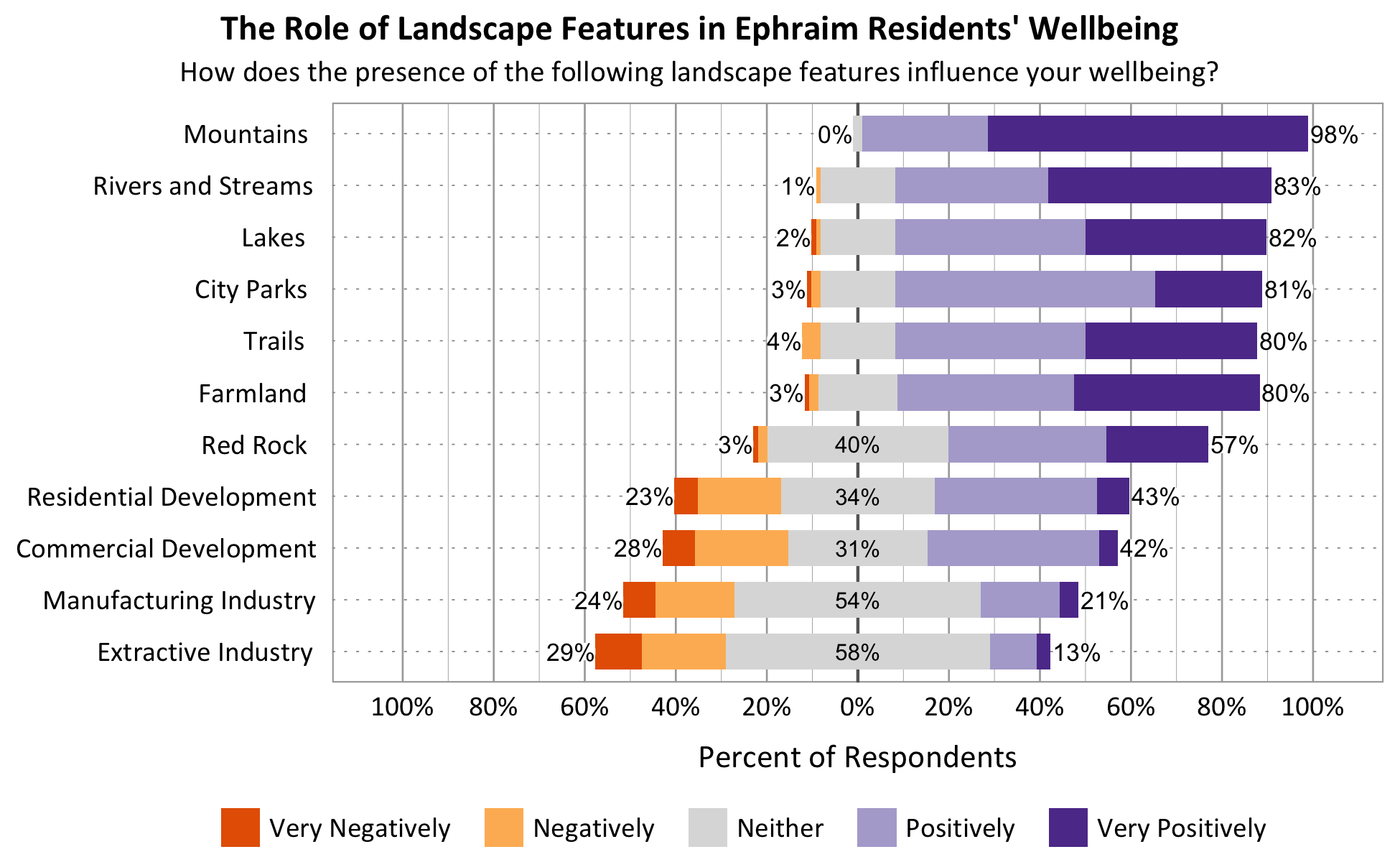 The majority of Ephraim survey respondents indicated they felt population growth was too fast (53%). On the pace of economic development, 36% indicated it was just right, 32% too fast, and 26% too slow. 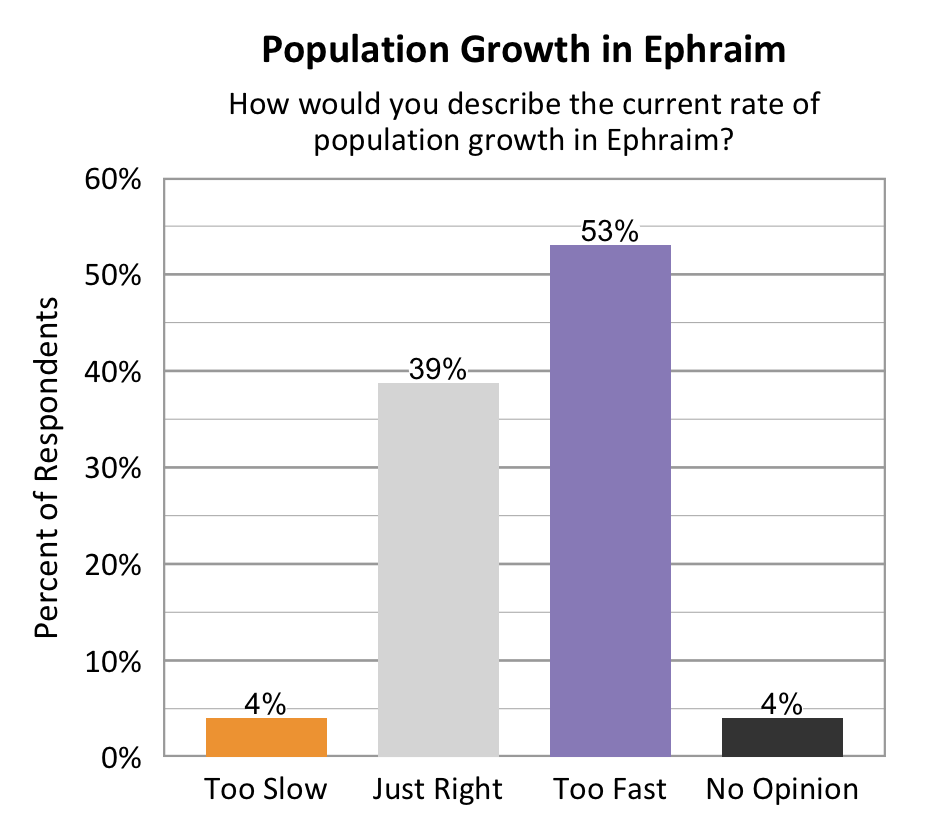 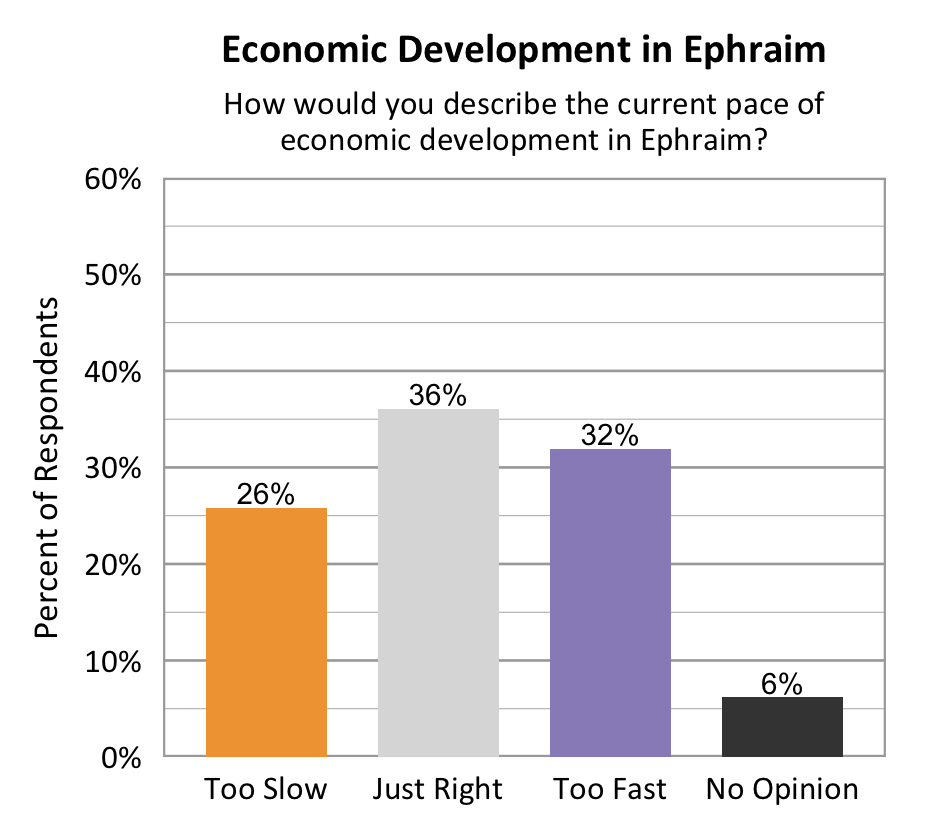 The graphs below show how Ephraim compares to other participating cities in the Wellbeing Project on these perceptions of population growth and economic development in 2022. Margins of error are particularly high for Delta, Helper, Midvale, and Santaquin due to low survey response. 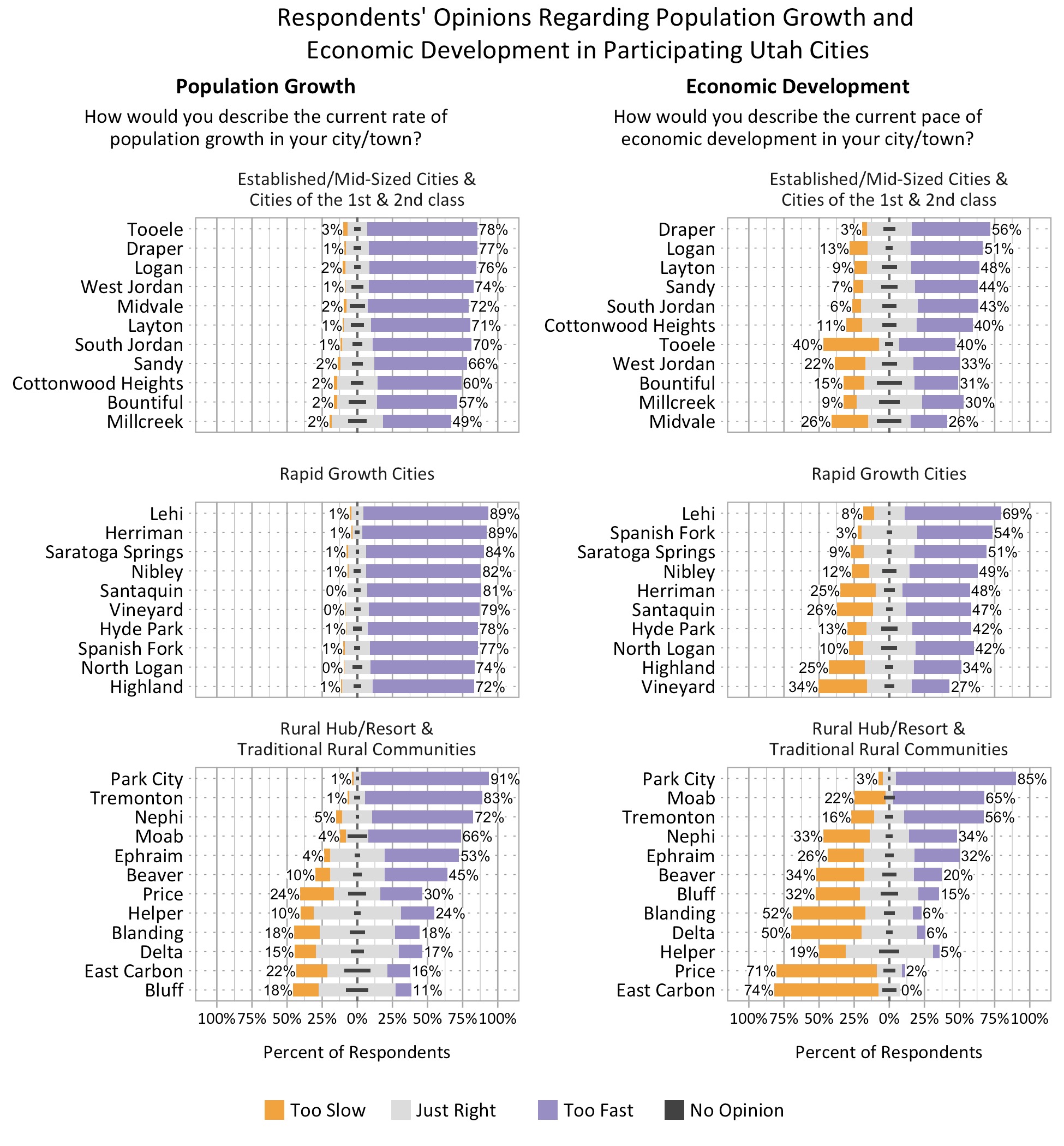 Survey respondents indicated the degree to which a number of possible local issues were a concern as they look to the future of Ephraim. Water Supply, Affordable Housing, and Access to Quality Food were the top three concerns with over 80% of respondents indicating these were moderate or major concerns. 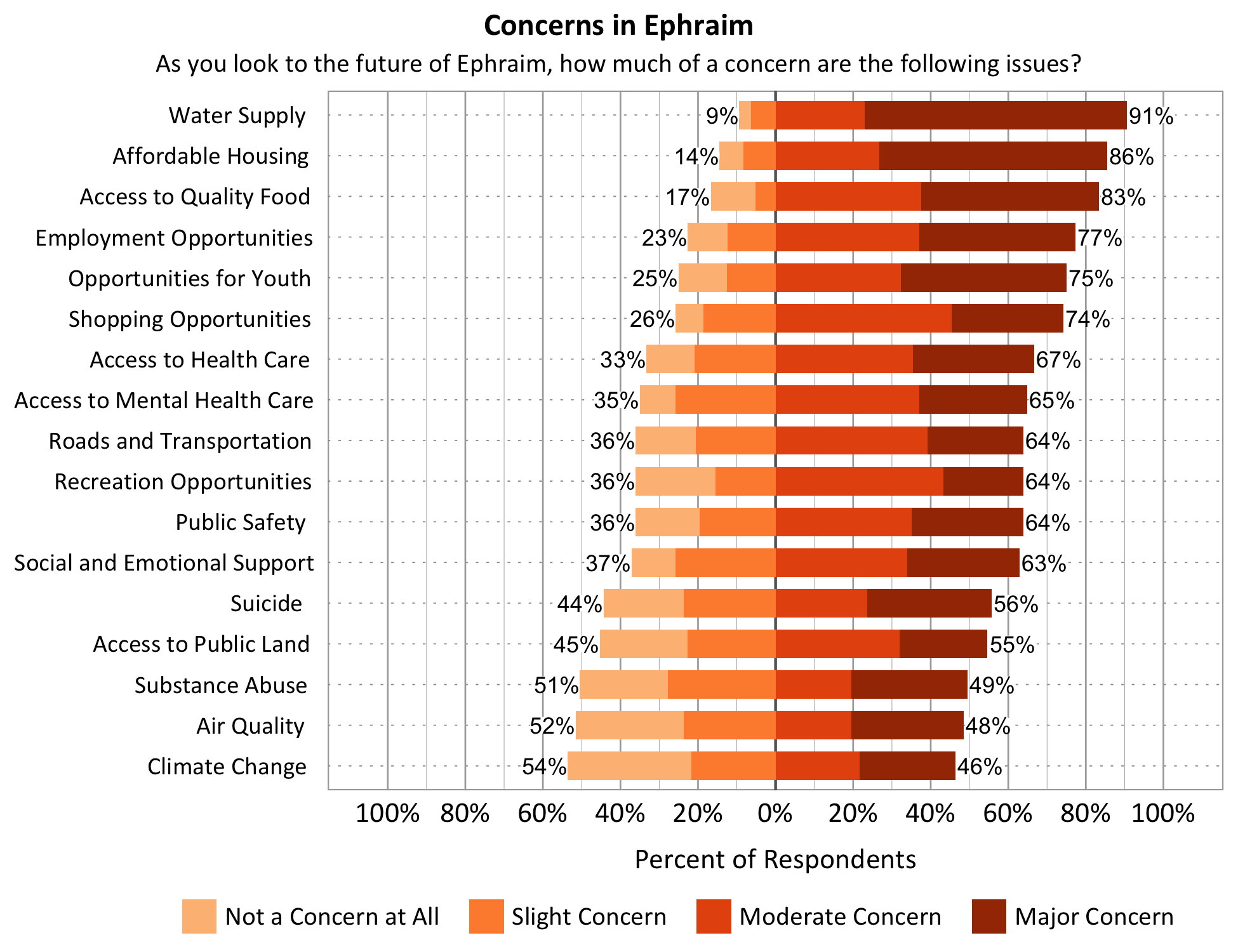 Other concerns were raised by 20 respondents who filled in the “other” category. Responses identical to the categories above are not included in the table. Table 5

Survey respondents were asked to comment on what they value most about Ephraim and to provide any additional comments about wellbeing in Ephraim. Comments have been shared with city leaders. In summary, the social climate in Ephraim was highly valued by residents, including the small, rural community. Ephraim also valued the local environmental quality, valuing the clean air specifically. The peace and quiet were also valued in Ephraim. The section with additional comments included many mentions of retail and business in Ephraim, many wanting more grocery store options. There were also comments concerning growth and development as well as housing, being worried about both of these categories.