Sorting through photographs of herself from childhood, Utah State University professor Michelle Baker notes that in virtually every picture she’s holding a cat.

“If someone had asked what I wanted to be when I grew up, I probably would have said ‘veterinarian,’” says Baker, who joined USU’s Department of Biology and Ecology Center faculty in 1999. “I didn’t know any women scientists and didn’t know women could be scientists.”

It wasn’t until the she started university studies at Pennsylvania’s Lafayette College that the southern California native, who spent part of her childhood in the Phoenix area, began to consider a scientific career.

Baker shared her professional journey through a talk entitled “How I Became a Woman in Science instead of a Crazy Cat Lady” with family and friends Feb. 16 at the USU President’s Home. Her presentation was the 11th talk in the university 2011-12 Inaugural Professor Lecture Series. Coordinated by the Provost’s Office, the series highlights the accomplishments of faculty who have been promoted to full professor in the past year.

Baker began her undergraduate career as a chemical engineering major, but felt like “a fish out of water in a FORTRAN class filled with pimply nerds.”

She soon switched to biology and, by her sophomore year, the aspiring scientist was employed as a research assistant in an environmental microbiology lab. An opportunity to participate in aquatic ecology research at a nearby reservoir followed.

“I couldn’t believe I was actually paid to play in the mud — it was great,” Baker says.

Graduate studies followed at the University of New Mexico, where Baker continued to develop her interests in aquatic sciences ranging from oceanography and limnology to stream ecology, hydrology and geochemistry.

After earning a doctorate, she was off to Toulouse, France, for a postdoctoral assignment.

“My field site was at the edge of Bordeaux’s wine growing region,” Baker says. “It was a beautiful, quaint area — even going to the grocery store was a source of entertainment.”

During that period, she learned of a faculty opportunity at Utah State, which turned out to be an ideal fit.

“I’ve had a surprisingly flexible choice of research activities here at USU,” Baker says. “I’ve had interesting opportunities that I never thought would be possible.”

Her current research activities focus on biological and hydrological controls of water quality. The ecosystem ecologist is studying processes that control nutrient transport and retention in streams and rivers, including the effects of land use on these processes. She’s devised innovative experiments that allow her to perform studies on large rivers that were previously conducted only on relatively small streams.

“We’ve figured out a way to study nutrient dynamics in rivers that require boats,” Baker says. “Previous studies have only been conducted in streams researchers can wade in.”

She has conducted research, funded by the National Science Foundation, in sections of the Snake, Salmon, Buffalo Fork, Green and Henry’s Fork rivers in Idaho and Wyoming and in rivers of the American Midwest, including Indiana’s Tippecanoe and White rivers. Her research findings are helping state and federal agencies identify sources of water quality problems, devise solutions, recommend policies and comply with federally mandated water quality regulations.

This summer, Baker and her student research team, comprised of both undergraduate and graduate students, head to research sites in eastern Utah along the Yampa, Green and Colorado Rivers. The students, she says, are the “lifeblood” of her research efforts.

“Not only are they out in the field carrying out the work, they’re stretching the boundaries of our thinking,” Baker says. “Students bring in fresh, new ideas and perspectives.” 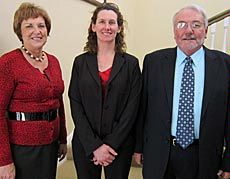 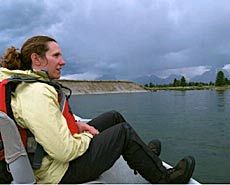