Utah State University Extension Specialist Linda Skogrand did not learn how to deal with gang members when she was in college. Working in inner city communities taught her.

“I had to learn new things that were not taught to me in the ivory tower,” said Skogrand. “You don’t get a background at a university on how to interact with gang members.”

After earning her bachelor’s from the University of Minnesota, Skogrand worked as a social worker in inner city St. Louis.

“I decided to visit a client and she called and said I probably shouldn’t come. She and her children were lying on the floor because snipers were shooting in her windows,” said Skogrand.

Moving back to Minneapolis, Skogrand was in charge of providing AIDS education to high-risk populations. She chose to focus on gang members, street kids and people in prison. She was asked by a lead gang member to present at a gang meeting consisting of ten gang members representing the top five gangs in Minneapolis.

“I pointed out that HIV was something that could kill you, and could spread HIV to others around you and not even know it,” said Skogrand. “One guy interrupted and asked ‘I don’t even know if I will live when I leave this building today, why should I care about what happens five years down the road?’”

Skogrand’s background in working with gang members gave her the knowledge to respond firmly.

“You may not care about what happens to you, but you do care about unborn children you might infect, your girlfriend or wife, or the sorrow you will cause your mother,” said Skogrand.

The gang member realized the value of her lessons, and Skogrand provided education to more than 900 gang members about AIDS.

After 30 years of working in inner cities and universities, Skogrand came to USU as an extension specialist.

“Utah State provided me the opportunity to use my background of working in the community, while living in a place with mountains and cows,” said Skogrand.

Skogrand gave her Inaugural Lecture Series presentation Jan. 29, the sixth lecture of this academic year’s installment. Her lecture, “Learning Beyond the Ivory Tower,” described her roots and path to success at USU.

Skogrand works with Cooperative Extension at USU working to bring resources to communities throughout all of Utah.

“Utah State gives me the opportunity to perform research to hear the voices of those who haven’t been heard,” she said. “I am allowed to continue to do things I have passion for.”

Skogrand’s research has been focused on helping the Navajo create better couple relationships. She has also done work with Latino’s and low-income families.

“One of the counties in Utah is 55 percent American Indian, and the county agent had no resources to bring to Navajo people because of a lack of research,” said Skogrand.

Skogrand conducted research and created resources over four years that provided information to the Navajo people about to enhancing couple relationships from a cultural perspective.

“The booklet that was created based upon the research has been distributed to more than 3,000 Navajo couples,” said Skogrand.

“My only regret about my professional path is that I didn’t come to Utah State University sooner,” said Skogrand. 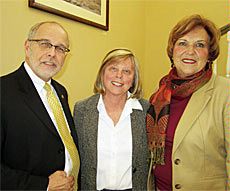