As Americans ponder the missteps that toppled insurance giants and major investment banks, Utah State University professor Dan Coster surmises that well-educated, ethical actuaries could help prevent future financial debacles.
“Properly trained actuaries could help us avoid the next recession,” Coster told family and friends who joined him Feb. 2 at the USU President’s Home for the sixth talk in the university’s 2009-10 Inaugural Professor Lecture Series. The series, coordinated by the Provost’s Office and hosted by President Stan Albrecht and First Lady Joyce Albrecht, highlights the accomplishments of faculty who have been promoted to full professor in the past year.
Coster, who joined the faculty of USU’s Department of Mathematics and Statistics in 1990, coordinates the university’s actuarial science program, in which about 12 undergraduates are currently enrolled.
“Actuarial science, which involves applying mathematical and statistical methods to assess risk in the insurance and finance industries, is kind of a best kept secret,” he says. “It’s a wonderful career path. Two of our undergrads have already passed the first two qualifying exams for professional certification.”
A native of New Zealand, Coster completed his undergraduate and master’s studies at England’s Cambridge University and earned a doctoral degree from the University of California at Berkeley. At Berkeley, he first crossed paths with New Zealand-schooled friends Richard and Adele Cutler, who currently serve as department head and professor, respectively, in USU’s Department of Mathematics and Statistics.
After earning his doctorate, Coster accepted an assistant professorship at Purdue University, where he began a now 20-year research collaboration applying experimental design and statistical analysis to varied public health studies. His most recent research involves development of survey instruments for screening of eating disorders in elite female athletes.
“We developed two different screening tests that are ready for the marketplace and available to end users,” he says.
After a few years at Purdue, the Cutlers convinced Coster to return to the American West and join USU’s team.
“I liked the idea of a mixed mathematics and statistics department and Utah is a very attractive destination,” Coster says. “Bottom line: you can’t ski in Indiana.”
After a few years in his new home, he met his wife, USU Family Life alumna Sherri Maley Coster, whom he married in 2000.
In addition to his research endeavors, Coster enjoys the challenges of teaching, which he describes as a craft one is always trying to perfect.
“You never get it quite right,” he says. “You’re always tweaking the way you teach material. Teaching is something that is always evolving.”
One of his current teaching pursuits is mastering the interactive broadcast system through which he instructs public school teachers throughout the state as part of the Utah Mathematics Endorsement Program, known as “UMEP.”
“This is an exciting project led by my colleague Jim Cangelosi,” Coster says. “The aim is to alleviate Utah’s shortage of mathematics teachers. We’re retraining teachers from other fields to teach math at the secondary school level.”
Coster acknowledges that math and statistics often get a bad rap and many find the subjects intimidating.
“That’s unfortunate,” he says. “Because each is applicable to every other field and each provides a path to rewarding careers.”
Related links:
USU Department of Mathematics and Statistics
USU College of Science
Contact: Dan Coster, 435-797-2815, dan.coster@usu.edu
Writer: Mary-Ann Muffoletto, 435-797-3517, maryann.muffoletto@usu.edu 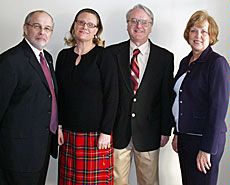 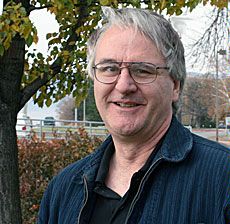