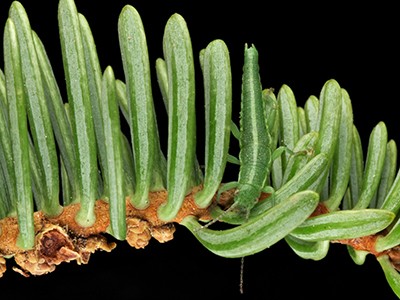 At what point on the journey along the branches of the evolutionary tree does a population become its own, unique species? And is a species still distinct, if it mates with a different, but closely related, species? Evolutionary biologist Zach Gompert of Utah State University explores these questions and more, using plant-eating stick insects of the Timema genus as a research model.

With colleagues from ten universities in North America and Europe, Gompert published ecological and genomic insights into stick insect speciation in the Feb. 17, 2017, issue of Nature Ecology & Evolution. His research is supported by the National Science Foundation and the Division of Research Computing in USU’s Office of Research and Graduate Studies.

Timema, commonly known as “walking sticks,” are cryptic, meaning they visually blend into their surroundings to hide from hungry predators.

“Our work on these insects suggests speciation can be initiated by a few genetic changes associated with natural selection on cryptic color-patterns,” says Gompert, assistant professor in USU’s Department of Biology and the USU Ecology Center. “While speciation is much more complicated than these changes, Timema’s color-patterns provide a window for studying the early phases of the formation of a species.”

For the study, the researchers combined field experiments with genomics. They sequenced more than 1,000 stick insect genomes – the genetic material of each organism. Gompert says the size of their study is a research scale rare outside of human population genetic studies.

“Having sequenced the genomes of a thousand individuals, we were able to pick up signals and variations that might have been missed in a smaller sample,” he says.

The overall process of generating a new species involves mate choice and the accumulation of genetic differences across the genome in geographically isolated populations, Gompert says. Rapid reversals of speciation can occur when distinct species, long separated, once again cross paths and mate.

“When you look at places where two populations co-occur, they are either quite distinct across the entire genome or only distinct in a few regions of the genome,” he says. “This could be viewed as an evolutionary gap. However, when you look across space, where populations don’t co-occur, you can span this gap because intermediate stages of genetic differentiation are observable.”

So, what makes a species its own species?

“We still have a lot of unanswered questions,” he says. “While color variations in organisms, such as stick insects, can be striking and inform us of phases of evolution, they’re one small aspect of a multi-faceted speciation process.”

Gompert is the USU College of Science’s 2017 Faculty Researcher of the Year. He and USU colleague Lauren Lucas are upcoming speakers for Science Unwrapped’s spring 2018 “Science of Art” series during the university’s “Year of the Arts.” 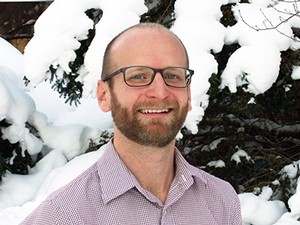 USU evolutionary biologist Zach Gompert is the College of Science's '2017 Faculty Researcher of the Year.’ He and colleagues published findings from a recent study in ‘Nature Ecology & Evolution.’ 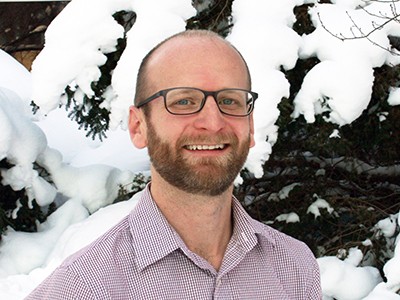