Nearly every weekday for the past four years, Utah State University student Cody Tramp has shown up at a biology lab before 7:30 a.m. to work on varied research projects. And he rarely took a break on weekends, says his faculty mentor Dennis Welker.
“Frankly, Cody has demonstrated greater motivation, attention to detail and desire than many of the graduate students who have worked with me,” says Welker, a professor in USU’s Department of Biology. “He definitely has the drive and intellectual capabilities to become a successful research scientist and he’s a considerate and engaged human being, as well.”
Tramp, who graduates this May capping off a stellar undergraduate career, is the recipient of  a 2010-11 Phi Kappa Phi Graduate Fellowship. Offered by one of the nation’s oldest honor societies and awarded to only 57 grad school-bound seniors each year, the honor includes a $5,000 award toward the recipient’s first year of graduate study.
“I’m excited about the award and excited to get started,” says Tramp, who will pursue graduate study here at USU, albeit in a new discipline.
The Wyoming native, who is completing a bachelor’s degree in molecular biology and biochemistry, has set his sights on the emerging field of synthetic biology and, shortly after doffing his cap and gown, will begin new research with faculty mentor Charles Miller in USU’s Department of Biological Engineering.
“It’s a different mindset and a very new field — wide open for discovery,” Tramp says.
Tramp and Miller will pursue research using BioBrick technology, a standardized system of biological building blocks that enable engineers to assemble synthetic DNA circuits.
“With this technology, engineers are developing life-saving drugs, biosensors to detect toxins, bioplastics, biofuels and tools for bioremediation,” Tramp says. “We’ll be working on circuit design in Synechocystis, a type of bacteria that gets its energy from light and uses carbon dioxide from the air as its carbon source.”
As he enters graduate study, Tramp has a solid research resume, including a published paper in the journal Plasmid and a completed Honors thesis. With Welker, Tramp conducted experiments to identify the specific DNA sequences and proteins involved in controlling replication of a DNA plasmid in a lactic acid bacterium used as a probiotic and in the production of fermented dairy products.
Tramp was named a Utah Governor’s Scholar in 2009 and a Goldwater Scholar in 2009. The Honors student was among fewer than 30 undergraduates selected nationwide for the 2009 Harvard Stem Cell Institute Internship Program. Tramp spent 12 weeks in summer 2009 conducting research at the Massachusetts General Hospital Center for Regenerative Medicine and attending twice-weekly seminars led by USU alum Willy Lensch, a faculty member of Harvard Medical School.
In the coming year, Tramp says he looks forward to USU’s participation in the 2010 International Genetically Engineered Machine competition — known as iGEM — hosted by the Massachusetts Institute of Technology in November. More than 125 university teams have registered for the competition that offers participants a simple challenge: if you could make a bacterium do anything, what would you have it do?
“Coming from a biology background, I think I’ll be able to offer a unique perspective as I begin work with a team of engineers,” Tramp says.
Related link:
USU College of Science
Contact: Cody Tramp, c.a.tramp@aggiemail.usu.edu
Writer: Mary-Ann Muffoletto, 435-797-3517, maryann.muffoletto@usu.edu 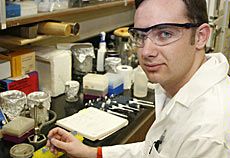 Graduating senior Cody Tramp, who was named the College of Science's 2010 Scholar of the Year, is the recipient of a 2010-11 Phi Kappa Phi Graduate Fellowship. 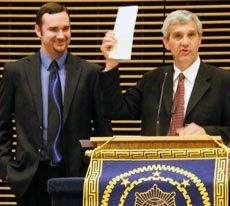