Ask undergraduate computer scientists about their most vexing programming challenge and they’ll sum it up in one word: bugs.
Utah State University computer science majors Alison Cooley, Elise Derr and Nare Hayrapetyan have “been there, done that.”
“It’s so frustrating when you know the code you’ve written should work but it doesn’t,” says Hayrapetyan, a third-year USU Huntsman Scholar from Armenia.
“Then, you’ll often discover that it’s just one character — maybe a semicolon is missing — that’s causing the problem,” sophomore Derr says. “There have been times when I’ve looked for a problem for hours.”
“There’s not just one right way to implement a solution to a programming assignment,” says Cooley, a third-year student. “And sometimes it’s hard to find a correct path.”
Budding programmers who follow in the trio’s footsteps are in luck because the team, with faculty mentor Renee Bryce, was awarded a grant this month to research the causes of student programming bugs and to develop learning materials to ease the exasperating obstacles that often discourage fledgling learners.
Bryce, who joined USU’s Department of Computer Science in August 2008 as an assistant professor, learned June 9 that she and her students received a Collaborative Research Experience for Undergraduates grant from the Computer Research Association's Committee on the Status of Women in Computing Research. According to the committee’s Web site, the “action-oriented organization dedicated to increasing the number of women participating in Computer Science and Engineering (CSE) research and education at all levels.”
The award provides each of the three undergraduates a $3,000 stipend for the 2009-10 academic year, a $4,000 stipend for summer 2010, funds for supplies and travel funds to attend the 2010 Utah Conference on Undergraduate Research in Cedar City and the 2010 Grace Hopper Celebration of Women in Computing conference.
“This is a great opportunity for these students,” Bryce says. “They’ll learn a lot through this experience and be a good role model for future students.”
The team’s proposal calls for the development of “Bug Theatre,” a program using online videos and Web-based tutorials to identify common bugs and offer advice and software tools to avoid them. The students have selected a movie motif to keep the subject humorous, entertaining and non-threatening.
“The students have great ideas and will create movie posters and tickets that will advertise the finished program,” Bryce says. “Over the course of the next year, they’ll develop online movies about bugs that will benefit not just USU students but will be available over the Web to users everywhere.”
Computer bugs are not only a headache for students but a significant bane for the computing industry.
“The National Institute for Standards and Technology estimates that computer bugs cost our economy $59 billion a year,” she says. “Bugs are usually annoyances but they can potentially cost lives.”
Cooley, who hopes to pursue a career with the FBI, looks forward to the research challenge and developing movies for her fellow students.
“I wish I’d had something like ‘Bug Theatre’ to help me out,” she says.
Related links:
USU Department of Computer Science
USU College of Science
Contact: Renee Bryce, 435-797-0737, renee.bryce@usu.edu
Writer: Mary-Ann Muffoletto, 435-797-3517, maryann.muffoletto@usu.edu 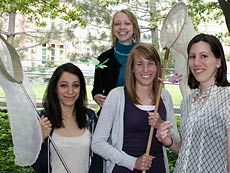 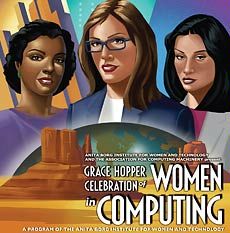 As part of the grant award, student team members receive travel funding to attend the national 2010 Grace Hopper Celebration of Women in Computing Conference - location to be announced in October.