During his first foray into college studies, Utah State University doctoral student Michael “Mike” Negale admits he lacked confidence. The Sundance, N.M., native found his first semester of college too difficult, dropped out of school and took a job at a supermarket.

But the young Navajo, who graduated from Gallup High School in 2000, had a keen interest in computers and decided bagging groceries wasn’t how he wanted to spend the rest of his life.

“I made the decision to try again,” says Negale, whose academic journey, which included selection as a National Science Foundation Graduate Research Fellow in 2013, is chronicled in the spring 2014 issue of Winds of Change, the journal of the American Indian Science and Engineering Society.

Approaching a second attempt at computer science studies with measured caution, Negale initially enrolled in just one programming class at Utah Valley University. More classes followed and, while earning an associate degree and a spot on the Dean’s List, he developed interests in physics and math.

“I never took physics in high school, but the computer science program required it along with math,” he says. “The first physics class I took was the hardest, but I was taught to go to class even if you don’t have your homework done.”

Negale’s persistence paid off. UVU’s physics department head guided him to a 2010 internship opportunity at Chicago’s Argonne National Laboratory, where he was introduced to atmospheric physics. A second internship in 2011 brought him to Utah State’s Space Dynamics Laboratory, where he continued to pursue the field and met USU experts.

This past summer, Negale was selected to participate in the 2013 Incoherent Scatter Radar Summer School at the Massachusetts Institute of Technology Haystack Observatory. He subsequently spent a month at the University of Alaska’s remote Poker Flat Research Range near Fairbanks, where he continued his research on short-period gravity wave dynamics. He is currently comparing findings from Alaska with data collected from other sites around the world.

Throughout his undergraduate career, Negale volunteered as a tutor for youngsters in grades K-12. He continues his service at USU as a volunteer for Science Unwrapped, the College of Science’s public outreach program. In addition to his NSF fellowship, Negale is the recipient of a Navajo Nation Graduate Fellowship, an American Indian Graduate Center Fellowship and a Dr. Howard L. Blood Graduate Fellowship in Physics.

“Think about your future and what you like doing,” he says. “Opportunities are out there — but passion is something you need to work to find.” 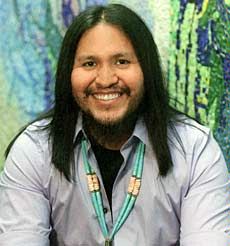 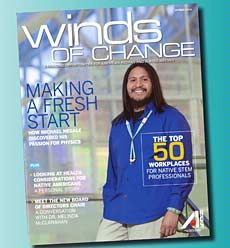 Negale is featured on the cover of the April 2014 issue of 'Winds of Change,' journal of the American Indian Science and Engineering Society.