Being a statistician wasn’t a profession Utah State University professor Christopher Corcoran dreamed of as a child.

“Kids want to be firefighters or cowboys or soldiers,” says Corcoran, a USU alum who returned to Utah State in 1999 to join the Department of Mathematics and Statistics faculty. “I didn’t decide to pursue statistics study until I was well into my undergraduate studies.”

The Detroit native earned a bachelor’s degree in mathematics, statistics and computer science in 1995. From USU, Corcoran headed to Harvard to study biostatistics and genetic epidemiology. He completed a doctoral degree in 1999.

“Cache Valley is my wife’s home and that’s what brought me to USU initially,” he says. “After graduating from Harvard, one of my former professors encouraged me to return.”

At first glance, Utah State might not seem like a favored destination for a biostatistics researcher with Corcoran’s tool set.

“There’s no medical school here, after all — no graduate school of public health,” he says. “And yet, USU has active, interdisciplinary research in epidemiology taking place across departments in psychology, nutrition and food science, family life and more.”

That’s a message Corcoran shared with family and friends Oct. 13 at the USU President’s Home for the second talk in the university 2011-12 Inaugural Professor Lecture Series. The series, coordinated by the Provost’s Office and hosted by President Stan Albrecht and First Lady Joyce Albrecht, highlights the accomplishments of faculty who have been promoted to full professor in the past year.

“The Cache County Study on Memory, Health, and Aging has provided a wealth of research opportunities,” Corcoran says. “When I returned to USU, work underway at USU’s Center for Epidemiological Studies was right up my alley. It’s allowed me to collaborate with many scientists here on campus and former professors and colleagues at Harvard, as well as scientists from the University of Utah, BYU, Johns Hopkins and Duke.”

Corcoran studies computational approaches to problems encountered in statistical genetics. At USU, he’s been involved in a variety of studies using data collected from the memory study to determine genetic precursors to such conditions and ailments as Alzheimer’s disease, hip fractures, birth defects, autism and colorectal cancer.

“Genetic studies are statistically intensive,” he says. “That’s largely due to technological advancements that allow us to examine millions of genes. As a biostatistician, I help researchers design these kinds of studies, and then efficiently analyze the large volumes of data that result.”

Involvement in research, Corcoran says, adds an enriched dimension to his teaching.

“USU has the only doctoral degree program in statistics in the state and one of the few in the region,” he says. “Our students — at both the graduate and undergraduate levels — are very engaged in relevant research pursuits.”

Even in his introductory statistics classes, Corcoran says, he frequently uses real-world examples of statistics problems to explain concepts to fledgling statisticians.

“It’s a dynamic field and USU is at the forefront of critical research — especially in studies related to Alzheimer’s disease,” he says. “Alzheimer’s is a very costly disease and, as our population ages, it will become more and more of a public health concern. These kinds of studies here at USU allow our students access to unique and vitally important research opportunities.” 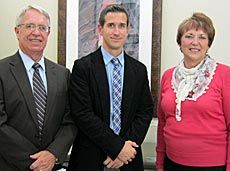 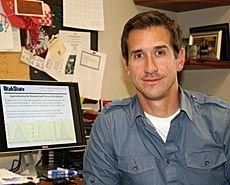