The featured award of the evening, the Bill E. Robins Memorial Award, went to Troy A. Smith. The award is presented to the student who excels academically, displays outstanding leadership ability and shows dedication to Utah State. Smith served as this year’s associated students of Utah State University executive vice president.
“Troy accomplished so much at Utah State and represented the students so well in all that he does,” said Tiffany Evans, director of student involvement and leadership. “In leadership positions, lobbying the legislature and recruiting future Aggies, Troy meets every challenge.”

“This award recognizes a student who shows commitment to their institution and their program of study,” said Peterson. “The student must demonstrate internal involvement and service, department dedication, perseverance during times of adversity and contribution behind the scenes.”
The new award was presented to Coby Champneys, a senior majoring in agricultural education.
Suzann Miller was the recipient of the Gerald R. Sherratt Award. This award is given each year to a member of the university’s administration or staff who demonstrates superior leadership skills as well as an unsurpassed dedication of service to students.
Tabitha Lazenby took home the Val R. Christensen Service Award. The award was established in honor of former Vice President for Student Services Val R. Christensen’s life-long commitment to volunteer work. It is presented to a student or organization whose volunteer service has had a significant impact on Utah State and the community.
The Achievement of the Year Award went to the Undergraduate Research Program. This award goes to an individual or organization whose achievement has brought recognition to the university on a state, national or international level.
The Organization of the Year Award is presented to the organization that has shown dedication, excellence and service to Utah State and the community. This year’s recipient was the Utah State Aggie Special Olympics Team.
Scott D. Davis was selected as this year’s Scholar of the Year. This award is given to a student who has demonstrated outstanding skill and knowledge in a particular field and who has made a singular contribution in research and shown a determination to succeed.
Jaycee Carroll and Jennifer Twitchell were named the 2007 Male and Female Athletes of the Year.
The Graduate Teaching Instructor of the Year was awarded to Delores Rimington from the Health Education Program, and the Graduate Research Assistant of the Year was awarded to Ana A.L. Baumann from the Psychology Department.
Myra Cook was selected as Professional Advisor of the Year, and Terry Peak from the College of Humanities, Arts and Social Sciences was selected as Faculty Advisor of the Year.
The award for Talent of the Year was presented to Luke Hancock from the Department of Music.
Laurie McNiel from the College of Engineering was chosen as Professor of the Year and Noah Riley and Maure Lyn Smith were chosen as Man of the Year and Woman of the Year.
The Robins Awards are named in memory of Utah State student-body president William E. Robins. Robins, who held a office in 1949, was killed with his wife in a 1954 plane crash. 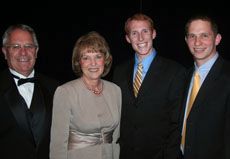 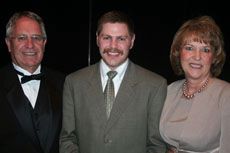 The Legacy of Utah State Award was presented to Coby Champneys (center).