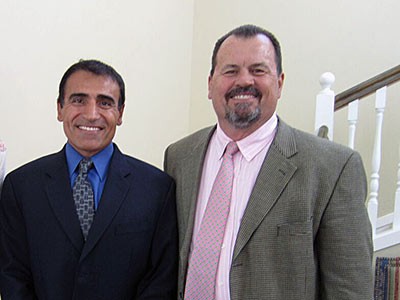 Reza Oladi (left) shared his insights during his Inaugural Professor Lecture after being promoted to full professor last year. He was joined by Ken White, dean of the College of Agriculture and Applied Sciences. Executive Vice President and Provost Noelle Cockett hosted the evening.

At the outset of his Inaugural Professor Lecture to colleagues, friends and administrators, professor Reza Oladi shared a quote from poet Louise Bogan, “The Initial Mystery that attends any journey is: how did the traveler reach his starting point in the first place?”

Oladi’s starting point was in Behbahan, in southwestern Iran near the Persian Gulf and neighboring Iraq. Oladi noted that the 1979 Iranian Revolution has made his former home a mysterious part of the world to most of his USU colleagues and friends. He traces his research interest in international economics and trade and efforts to understand connections between income levels and corruption back to his early years in Iran.

When the Iran-Iraq War broke out in 1980, Oladi was nearing the end of primary school. He referred to the span between 1979 and 1985 as “The Lost Years,” a period when school was open only sporadically. Some things were constant though: photographs in daily newspapers of people who had been hung, anyone with connections to the former government being targeted, half his province being occupied and his city being repeatedly bombed.

Oladi found being a university student in Tehran “… an escape of sorts, because Tehran was only bombed near the end of the war.” Another “escape” was also connected with higher education. Oladi took an examination and was one of four economics students to get a scholarship and allowed to leave Iran to attend graduate school.

“Getting to Canada was really sweet,” Oladi recalled. “I could say whatever I wanted to say, dress as I wanted to dress, wear my hair how I chose.”

Those freedoms may not sound like anything unusual to Oladi’s current students, but at the University of Tehran, it was common to have religious officials patrolling and enforcing rules for dress and grooming.

“After a few months, I lost my scholarship,” he said. “Big Brother had followed me to Canada and didn’t like something I had done with my taste of freedom.”

By that time though, Oladi had connected with faculty, had a fellowship and was earning some money tutoring other international students, so he stayed. He finished his Ph.D. and took a faculty position in Ohio.

His research has focused on international trade and more recently on corruption and its relationship to income. He traces his interest in that topic to his days in Tehran and seeing two acquaintances work out plans for a new business based on man’s family money and the other’s connections with religious leaders who were in power.

He shared some research findings that show as incomes rise in early stages of development in developing countries, people allocate less time and energy to fighting corruption in government and business, up to a point. Thereafter, as these countries become richer their willingness to fight corruption tends to rise.

“When you don’t have enough food on the table you can’t care very much about fighting corruption,” he said.

Oladi referred to oil as a “resource curse” that has caused social upheaval and given cover to government mismanagement since its discovery, a resource that “pollutes” the oil fields and politics.

Oladi joined Utah State University’s economics faculty in 2004, and is in the College of Agriculture and Applied Sciences’ Department of Applied Economics.

Inaugural Professor Lectures recognize a faculty member’s promotion to the top rank of professor, but Oladi said professorship is a milestone in his journey, not the final destination.